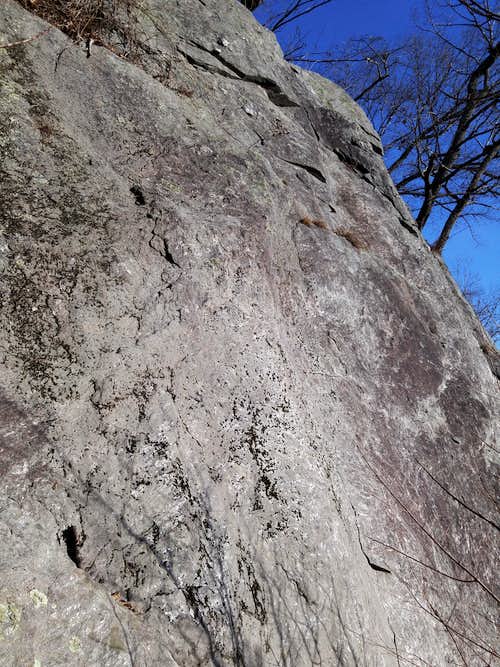 Blank Face
If Carderock is crowded or you just want a change of pace, a short trip downstream from the main Carderock cliffs gets you to Easter Egg Rocks, where there is a small collection of quality routes. Very few people ever climb here, and the base can be brushy (and very sandy), but it is worth it for the solitude and the fun. Even though there is not much climbing activity here nowadays, the rock is not terribly licheny on the routes (definitely some of that, though), and the clean rock tends to be a little stickier than the notoriously well-polished faces at Carderock.
A couple lines are leadable (passive strongly recommended), but the pro is a little runout and a little sketchy in places, so it's better to toprope the routes.
There is some amusing history behind the naming of this spot. This is copied from the Carderock guide mentioned below, which copied it from Up Rope (1947):
"One bright Easter Sunday, [local climbing legends] Chris Scoredos and Donald Hubbard were sitting at the top of Spider Walk [a fine 5.7 crack at Carderock], letting the young hopefuls down, one by one, as they fell off. Finally one rebelled. 'You grandpa's [sic], come down here and climb this thing if you can. They complied, then turning to the young hopefuls, they apologized for overestimating their maturity and promised them an Easter Egg Hunt. Accordingly the group proceeded to these cliffs. The grandpas then tied in as lead men on their ropes and took eggs to the cliff tops. They then taunted those below, for not one was able to follow either lead."
Get the guidebook Carderock Past and Present for additional diagrams of the climbing spot.


From I-495, take Exit 41, just north of the Potomac, heading west on the Clara Barton Parkway. In about a mile, take the exit for Carderock. Go left over an overpass and turn right at the stop sign. Drive to the last parking lot.

Walk past the now-closed restrooms. When you have to decide whether to go left or right on the Billy Goat Trail, go left. Hike past the clifftops on your right (the Hades Heights section of Carderock). In two or three minutes, the trail passes right by another clifftop area. This is the top of Easter Egg Rocks. Just before it is a drainage. To reach the base, go down that drainage and then bear left across rock outcrops (don't go all the way to the river first).

It should take no more than ten minutes to get from your car to the crag. Actually, I have made the trip in under five minutes.

The routes are listed left to right as you face them from the base; they range from 30 to 40'. I have climbed all of them but the first one. For anchors up top, 100' of static line has been more than enough for any of the routes. It is possible to do two or even three lines off a well-placed anchor.
Note: I wouldn't recommend Court Echelle for someone new to the grade. Because the crux is pretty low, falling makes hitting the ground likely unless the rope is low-stretch or the belayer is keeping things really tight. To work a 5.9 overhang and have safe falls, head back to Carderock and do something like Biceps or Incipient, where the overhangs are well off the ground. Biceps is a one-move wonder but a muscular pull, while Incipient is technical and sustained (probably a 10a or 10b in most places other than Carderock); both overhangs are harder, in my opinion, than Scoredos' Overhang is, and Incipient is harder overall because it really has no easy sections.

No fees or permits required. The park is open from sunrise to sunset.

All year, but spring and fall are best.