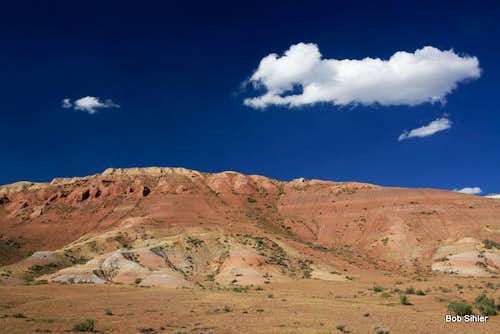 Tucked away in a quiet corner of southwestern Wyoming close to the Utah and Idaho state lines is a small slice of protected high desert that few other than fossil buffs and the occasional curious driver know about and visit-- Fossil Butte National Monument, one of the most significant fossil sites in the entire world.  Arid and sagebrush-dominated now, the area once had a humid subtropical climate where aquatic life flourished.
A scenic, pleasant, and uncrowded place to visit, Fossil Butte National Monument, in addition to its fossil displays at the visitor center, has two hiking trails and provides an opportunity for secluded cross-country rambling is well.  While scrambling is possible in places, there are no opportunities for true rock climbing because the rock is very loose and brittle.

Don't look for it!  There are no lakes here now, but there was a lake here long ago, and that lake was the source of the rich trove of fossils found here.
Around 50 million years ago, there were three large lakes-- Gosiute, Uinta, and Fossil-- covering substantial parts of what today is Colorado, Utah, and Wyoming.  Although it was the smallest of the lakes, Fossil Lake left behind what is the world's best record of a Paleogene freshwater lake ecosystem (though at times in its history the lake did have high salinity levels).   Most notable are the bat and fish fossils, many of which are complete and so detailed as to reveal teeth, scales, and skin, but there are also thousands of plant, mammal, arthropod, and reptile fossils-- the reptiles include turtles, crocodilians, snakes, and lizards.  Sorry, but there are no dinosaurs here, but 4-5 hours of driving will get you to Dinosaur National Monument in Colorado/Utah, where you can see and touch actual dinosaur bones, not replicas as you usually find in museums.
Once about 930 square miles at its greatest, Fossil Lake's "fossil" is still quite extensive-- over half of its sediments still exist.  Fossil Butte, one of the highest points around, now stands at about the center of the ancient lakebed, and authorized researchers still find and remove fossils from its cliffs.
In 1972, Congress designated Fossil Butte National Monument to protect this very special place for research and for the enjoyment of future generations.
Collecting or otherwise disturbing fossils is strictly prohibited!
This simply provides an overview of the geological story here; for more details about the natural and paleontological history here, please the NPS website for Fossil Butte National Monument.

There are two named "peaks" here: Cundick Ridge and Fossil Butte.  Both are flat-topped mesa-like peaks, and only the latter is officially named on the USGS quad for the area.  Cundick Ridge is higher and easier to "climb."  There will be pages for both of these peaks in the coming weeks.

Historic Quarry Trail-- This is a 2.5-mile loop (rated as strenuous by NPS but really more like moderate for most people) with a spur to the quarry itself (the spur was closed for repair work in August 2013, and I am not sure when it is supposed to reopen).  There are interpretive signs along the way and good views of Fossil Butte.  Anyone wanting to ascend Fossil Butte would use this trail to approach it.
Chicken Creek Nature Trail-- Previously called the Fossil Lake Trail, this moderate 1.5-mile loop has fine views of Cundick Ridge, goes through an aspen forest, and approaches an active fossil quarry (entry only permitted with NPS rangers or by special permission).  Anyone wanting to ascend Cundick Ridge would use this trail for the approach.
Hikes on Unpaved Roads-- North of the Chicken Creek Trail but still within the monument are two unpaved roads that lead to scenic overlooks.  The first heads south a short distance and then branches; both branches end after about a mile, and the south-leading one ends near the summit of Cundick Ridge.  The second unpaved road leads west for nearly two miles to an overlook called Rubey Point.
I believe both of these roads are closed to vehicles since the park website says not to block the gates when parking. 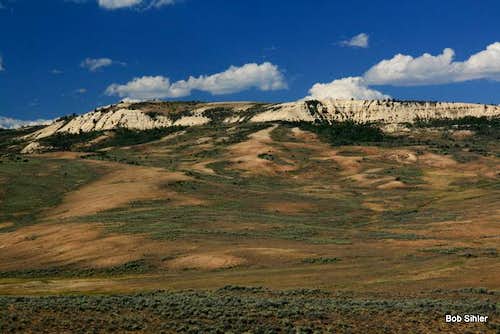 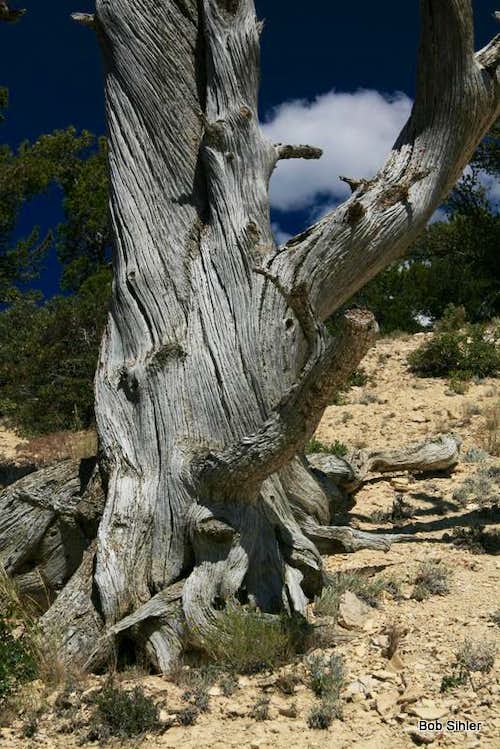 From the NPS site-- "More than 100 species of birds, mammals, snakes, and amphibians are known to frequent Fossil Butte National Monument."
There is a good chance you will see mule deer and pronghorn out here.  You might see elk as well depending on the time of year-- I found some nice antlers on Cundick Ridge. 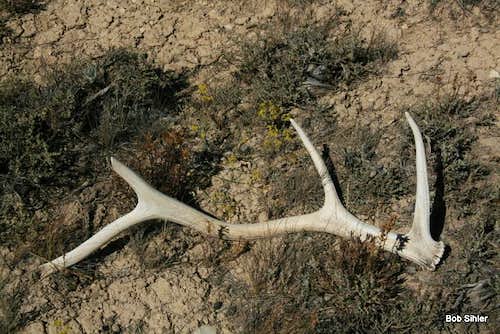 Fossil Butte National Monument is about 10 miles west of Kemmerer off U.S. 30.