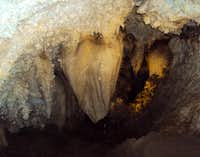 The Great Heart of Timpanogos...Largest formation in the caves 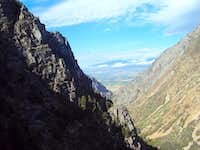 Trail Outside of Caves
Note: Timpanogos Caves National Monument certainly doesn’t fit the criteria for a summit and the only route is the route for the caves themselves. I went ahead and listed the Caves as an area so summit posters who like to collect National Monuments can add it to their list. So, get your spelunker on, hike to the caves and see you in Utah….

OVERVIEW:
Timpanogos Caves National Monument located near American Fork Utah is a one mile square national monument established in 1922. The main feature, as the name suggests, is a series of three connected caves located at 6,730 feet after a 1.5 mile hike on a paved surface. The hike to and through the caves is extremely popular and requires advance ticket sales during the summer months. The tours typically stop after the first heavy snows in the area sometime in early October. The caves are smaller than the more famous Carlsbad Caverns in New Mexico but they are a nice diversion away the city you can take your kids to. 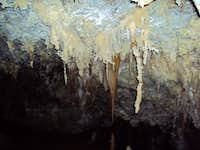 Soda Straws On Cave walls
The collective 3 caves have man-made tunnels connecting through the system and are loaded with interesting rock formations. There are stalactites, stalagmites, soda straws, popcorn, and other types of cave formations. The center piece is a huge stalactite named the “Great Heart of Timpanogos”. 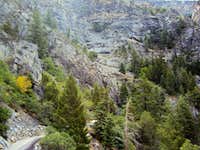 Cave Entrance high on mountainside
The caves were discovered at different times at the turn of the century. Local lore has it that the first cave (Hansen Cave) was discovered in 1887 by Martin Hansen while hunting cougar. The second cave (Timpanogos Cave) was rediscovered in 1921 by Vearl Manwill. The final cave was also discovered in 1921 by George and Wayne Hansen who spotted the middle cave’s entrance from across the canyon while deer hunting.

In 1922, shortly after the last cave was discovered, the site was designated as a National Monument by President Harding. At first the site was administered by the USFS but switched to the NPS in 1933. The first trails were built by the USFS in the 1920s including the Old Cave Trail in 1922. Many of the structures in the monument including the “Last Chance” bathroom on the upper trail and waiting area were constructed in the 1930s by the Works Progress Administration (think TARP circa 1930). One-way cave tours started in 1939 after all three caves were linked by man-made tunnels. 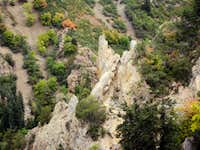 Looking down on trail

The hike starts in the NPS ranger station next to the trailhead where you pick up your tickets. They don’t sell tickets up the hill at the cave entrance, so buy before you start hiking. The National Park Service recommends an hour and half to hike the 1.5 miles but that takes into account visitors who are not in shape. Once you start up the trail, there is a ranger who will give visitors a safety brief before letting them proceed up the mountain. The trail winds through the forest and up the side up the mountain and the views are spectacular looking back into the canyon. If you do any hiking, it’s not a difficult trail, but you do get to see plenty of non-hikers doing some serious huffing-puffing as they make their way up. Not to worry, the US Government has thought of everything and put benches along the way at scenic spots.

Nearing the top of the hike, there is a stone bathroom. Keep on the right fork of the trail to the cave’s entrance. At the top of the trail, there is a stone waiting area. Tours start about every 20 minutes so there is usually some people waiting for their tour time to start. Next to the waiting area you can see fossils in the rocks of Pre-Cambrian animals---kind of cool. You don’t have to take the tour to walk the trail. They’ll give you a special non-tour pass if you just want to hike the trail up and down. 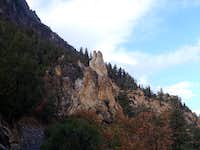 Rock Formations on Route
At the front of the caves, the rangers will call out tour times but they don’t shout, so you have to listen. Once your tour time comes up, everyone assembles in the “foyer” where the ranger will give you another safety briefing and introduce themselves. Then the tour starts. There are 3 caves (Hansen, Middle and Timpanogos Caves) in the tour, discovered at different times and linked together by man-made tunnels. The caves are loaded with helictites and various odd colored formations. Deep inside the caves you will see were the fault line runs. The ranger will point out the coolest features as they go along and field any questions you might have. Since individual guides do the tour about 5 times a day, they get pretty good at answering anything off the wall you might come up with. The tour takes about an hour.

The trail through the caves was made with tourists in mind and is as safe as any trail running underground through rock formations can be. That being said, some of the featured formations have ominous names like “13 Stitches” (which is the record for someone banging their head on it). The trail through the caves is mostly paved with man-made stairs where they could make them without damaging the rocks.

In addition to the standard tourist tour, the caves also offer actual spelunker tours by advance request through Hansen Cave (most of which has been previously closed to the public). Tour groups are limited 5 people and the NPS provides head lamps. Call 801-756-5238 to make arrangements.

In addition to the Cave Hike/Tour, there is a smaller hike Swinging Bridge Nature area. It’s only ¼ mile long, but pretty. Drinking water and fire rings are available. 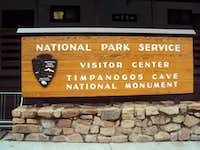 You can also reach the monument from Provo/Heber City by taking Highway 92 on the Alpine Scenic Loop. This is a twisty, narrow road. No Buses or Large (over 30’) vehicles are allowed. The Scenic Loop closes during the winter.

The Trailhead has a gift shop, restrooms and a phone available.

Parking is next to the NPS station or on gravel parking lots nearby. They fill up fast during the summer.

Timpanogos Caves is a National Monument with a bunch of extra rules and regulations on top of normal federal land rules. To visit the caves, you have to purchase a ticket for $7.00. During the summer the tours book up quickly, especially on the weekends so they recommend calling up to a month in advance to make your reservations. They take credit cards over the phone for payment. The tour season starts after the snow clears in May and runs until it starts snowing, usually in October. Early season and late season tickets are obviously easier to get as are weekday tickets during the summer. An oddism of Utah is LDS members avoid doing activities that cause other people to work on Sundays, so if you are not LDS that is usually a good ticket day too.

The Introduction to Caving Tour is offered Memorial Day through Labor Day and introduces visitors to the sport of caving and caving ethics. Although it is not a wild caving experience, the tour does require bending, crawling, and passage through tight spaces. The tour is limited to five people, age 14 and older. Call the visitor center for more information and to purchase advance tickets, 801-756-5238 Timpanogos Cave National Monument Visitor Center 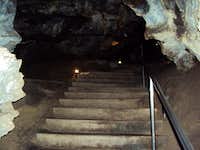 There are a couple of safety briefings the rangers go over. Before hiking the trail, a ranger cautions you about falling rocks, no jogging on the trail and please don’t feed the wild animals. In addition, no rock climbing and the collecting of flora, fauna or geological samples is strictly prohibited. There aren’t any water sources or food sources on the route, so you need to bring your own. And, as usual, don’t litter.

At the caves, another ranger will give a safety/policy briefing before starting the tour. Most of this briefing cautions you against slips, falls and head bumps. Some of the formations are lower than four foot tall, so a basketball player would most seriously have to watch their head. The ranger will reiterate the souvenir collection policy (it’s a federal offense!) and remind visitors not to touch the walls or formations (they are delicate).

No jogging or running on trail
No Wheelchairs, strollers
No Dogs, cats, or other pets
No Horses
Large Backpacks and baby carriers must be left outside the caves. 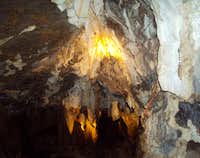 Rock Formations in the Caves
CAMPING

There isn’t any camping available on the route to the caves. The USFS allows for dispersed camping almost anywhere in the national forest area as long as it is not within 150 feet of a Service Road or 100 feet from water. Practice Leave No Trace camping if you choose to disperse camp. There are a couple of areas restricted from dispersed camping, so keep your eyes open for signage.

There are no camping areas within the Monument but there is an established area near Sawmill a few miles up the canyon. In addition to the campground, there are two picnic areas at Sawmill.

Within the Timpanogos Monument there are two picnic areas; one at Swinging Bridge ¼ mile from the visitor center and one across the street from the parking lot. 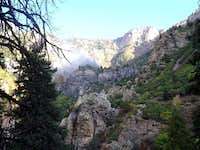 The area is inhabited by an abundance of wildlife to include moose, elk, and deer. There are also smaller animals such as chipmunks, squirrels and rabbits. For predators in the area, keep your eyes out for bear, cougars, coyotes, and foxes. Finally, watch out for poisonous rattlesnakes that may be on or near the trail.