Snow on the sands-- by Mark Doiron

Put on your sunglasses before you head into this startling change from the desert mountains and scrub sea all around it. It is one of the world’s unique places and arguably the site of its most beautiful sand dunes. The name itself is romantic and alluring, and the dunes here have been featured in at least two Hollywood movies: Clint Eastwood’s Hang ‘Em High, Eastwood’s first American-made Western; and the Willem Dafoe/Mickey Rourke drama White Sands. It is not an easy place to photograph well, but good pictures here tend to be spectacular. It is a magical place, and I have never had a bad time here. In fact, although the hiking is easy and the dunes are not anywhere close to being among the country's greatest in terms of height, one of the most cherished, most memorable experiences of my life occurred here, and I carry it with me daily. The world does not have many dune fields of gypsum sands (another one, interestingly enough, is just west of nearby Guadalupe Mountains National Park in Texas), and White Sands, covering about 275 miles of desert in the Tularosa Basin of New Mexico, is its largest. Gypsum is a naturally occurring mineral and is fairly common, but since it is soluble in water, it only rarely occurs as sand. 250 million years ago, what is now the Tularosa Basin was at the bottom of a shallow sea, later a large lake called Lake Otero. Gypsum was deposited at the bottom of this sea, and when the uplift that created the Rocky Mountains occurred, the gypsum rose into a huge dome (70 MYA). The center of the dome began collapsing 10 MYA to create the Tularosa Basin. The still-standing sides of the dome became the mountains that encircle the basin, and extensive gypsum deposits stayed up there with them. Starting then and continuing today, the rain and snow that fell in the mountains dissolved the gypsum and washed it down into the basin. Since no rivers drain the basin, the water gets trapped in the playa of Lake Lucero, evaporates, and leaves gypsum crystals behind (they can be three feet long). Nature breaks the crystals down into sand, and wind blows them into dunes. 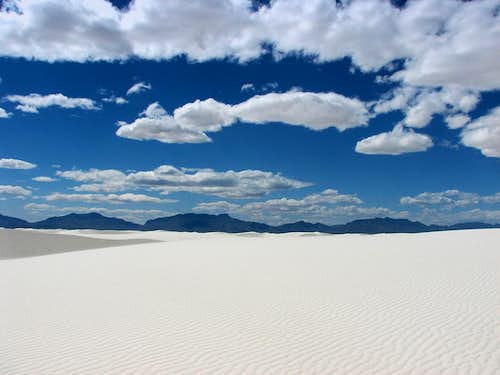 There are four types of dunes at White Sands, and a dune’s type is related to its distance from Lake Lucero and the amount of sand present. Dome dunes are the first to form. They are low mounds that form downwind of Lake Lucero, and they can move 30 feet per year. In places where winds are strong but sand is not abundant, crescent-shaped dunes called barchan dunes form. Where there is a large supply of sand, barchan dunes join and form long ridges called transverse dunes. Finally, at the edges of the dune field, parabolic dunes (shaped like something between a u and a v--- think back to your algebra class) form. These form when plants anchor the arms of barchan dunes and cause an inversion of their shapes. 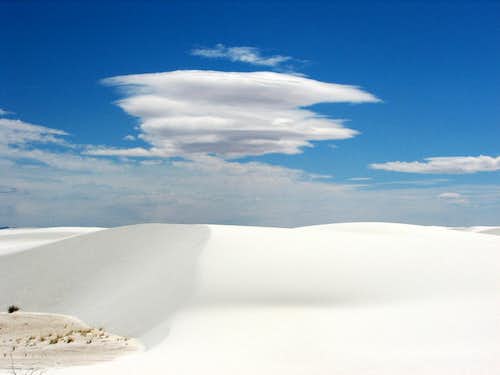 It is beyond my knowledge to give a good account of the diversity of the flora and fauna here and describe all the adaptations they have made in order to survive in this harsh, desiccated realm. However, I can say that, as is often the case in the desert, there is far more life here than one expects or sees at first. Cacti and other desert plants thrive, blooming in outrageous contrast to the midday glare. Some plants can elongate their stems to keep their leaves above the shifting sands. Others have leaves that reflect sunlight and keep the plants from withering. Mammals such as mice, foxes, coyotes, rabbits, and porcupines roam the dunes, mostly at night. Of course, there are several species of insects and reptiles. One mouse, two lizards, and a number of insects have evolved so as to have a white coloration enabling them to blend in with their surroundings. You may even see an oryx, an African antelope that the state introduced onto the White Sands Missile Range. Like many introduced species, the oryx has thrived in its new habitat that it is now considered a threat to the native flora and fauna. Still, it’s amazing and somewhat surreal to see something you’d expect to see in a National Geographic film about the African savanna treading the New Mexican desert.

The area averages 4000’ in elevation and experiences four seasons’ worth of temperatures, though the area typically does not see extreme measures at either end. Spring is warm and dry, but it is frequently windy, which can make the dunes a thoroughly unpleasant place to be. Summer is hot, usually in the 90s (F) but occasionally exceeding 100. Summer is also the wettest season; most of the area’s average 10 inches of annual precipitation falls as rain and hail during summer thunderstorms, usually in the afternoon. Fall is pleasant and dry, and winters tend to be mild, though temperatures often drop below freezing at night. Snow is uncommon but not unknown. 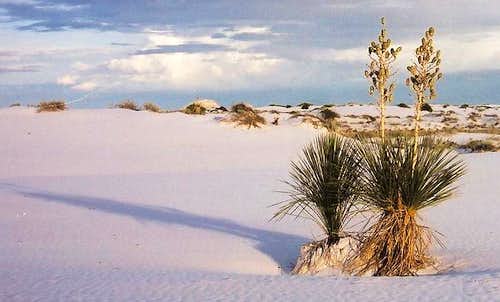 An eight-mile drive leads into the dunes and offers access to four different hiking trails, the best of which is the Alkali Flat Trail. This is a gentle, 4.6-mile RT trail that passes through stands of bare dunes and leads to Alkali Flat, part of the extended playa of Lake Lucero. White posts with orange reflective tape mark the trail. Avoid this trail when it is windy, as it would be easy to get lost. Hiking must be completed by sunset. Pets must be leashed at all times. Carrying a gallon of water per person, especially in the warmer months, is recommended. You can also just park the car and head out to explore. Just keep track of your route, and definitely do not do this on a windy day. 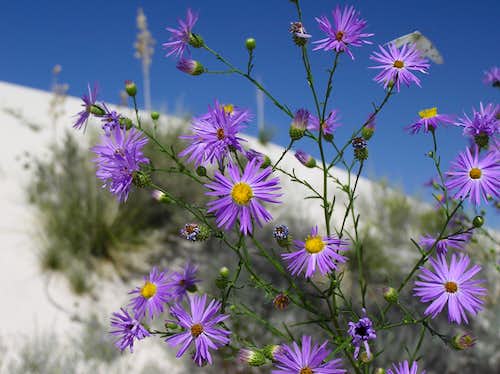 The colors, weather, and openness of this area create some incredible scenes in the skies. Here are a few: 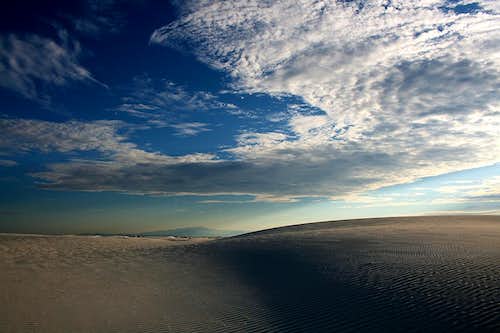 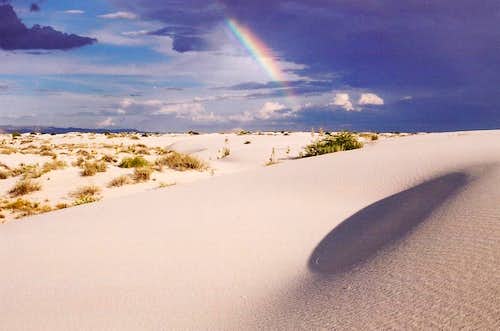 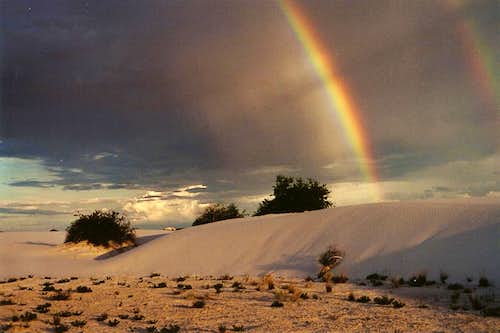 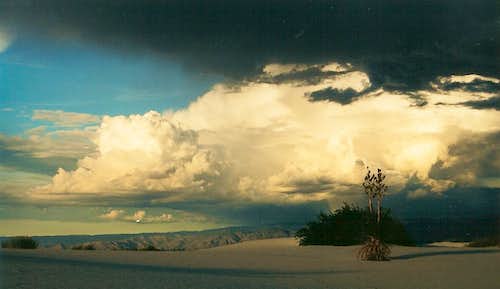 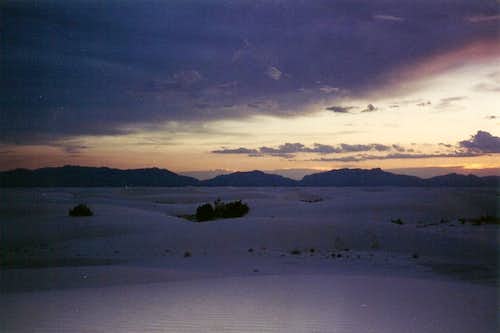 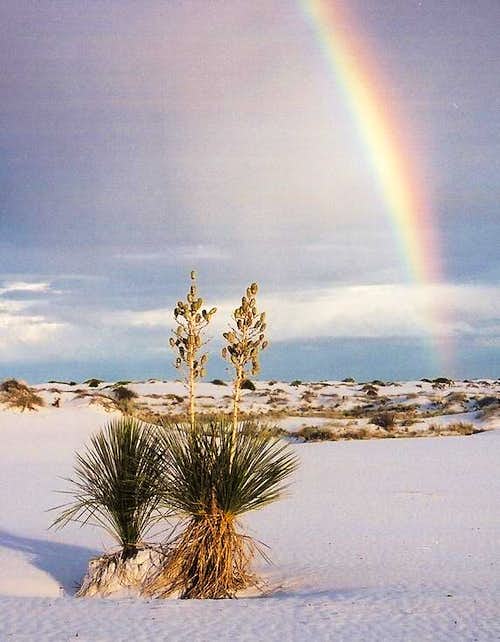 Drive 15 miles southwest of Alamogordo or 52 miles east of Las Cruces on U.S. 70 to reach the park.

There is a lot of it here, but mostly for good reasons. There is an entrance fee of $3 per person. Annual passes are available for $20. The America the Beautiful Pass, which provides access to NPS, Forest Service, Fish and Wildlife Service, and BLM lands for a year, costs $80. The monument is adjacent to the White Sands Missile Range, and sometimes the Dunes Drive is temporarily closed due to missile tests. U.S. 70 between the monument and Las Cruces may also be closed for up to three hours at a time. On average, there are two closures per week. The NPS website provides links to information about scheduled closures. Since debris from the tests sometimes falls into the park, touching metallic objects found among the sands is inadvisable and could be dangerous or even deadly. Removing sand from the monument is illegal. However, the monument’s gift shop does sell vials of gypsum sand collected from nearby, non-NPS land. The western half of the park, where Lake Lucero is and the dunes are born, is accessible by special permit only. Pets must always be leashed when out of the car. Bikes and other vehicles are prohibited off the established roads. Strange but true: During February, March, April, and May, alcohol is prohibited in the park. Kegs and glass bottles are illegal all year. The reason-- During most of the year, alcohol violations are relatively few and our rangers are able to deal with those situations. During February through May, however, we have had a large number of alcohol-related incidents due to heavy use by students over Spring break, many of them underage drinkers. Our small staff was not able to control alcohol violations, so for visitor safety reasons, the only solution was to ban alcohol outright during that period. John Mangimeli Chief of Interpretation White Sands National Monument

There is no developed campground within the park, and dispersed camping is illegal, but there is public camping at state parks within 35 miles. There are full services, including several hotels and motels, in Alamogordo and Las Cruces. Limited backcountry camping is available in White Sands. A one-mile trail leads from the Dunes Drive to the designated sites. At the sites, there are no toilets or water sources, and campfires are prohibited. Camping permits are required and are available only on the day of use and must be obtained in person; no reservations are accepted. Permits cost $3 per person.