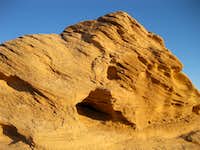 This page mostly covers Colorado National Monument but does have a subsection for locations in the vicinity. If anyone else ever decides to make a page for that complex-- the McInnis Canyons National Recreation Area-- I will edit this page accordingly.

Right in the back yard of Grand Junction is a slickrock wilderness that is a snapshot of what much of southern Utah is all about. This place, Colorado National Monument, is filled with monoliths, red-walled canyons, and scrub-topped mesas and plateaus. Although it is very popular with local residents, it does not seem to attract that much attention from others, perhaps because it is not a national park and because Grand Junction is not a major travel city. 23-mile Rim Rock Drive twists, turns, and climbs through the monument, yielding far-ranging vistas of the canyon country, the Grand Valley, and the Book Cliffs. Desert wildlife abounds, and those keen on raptors may be delighted; on one morning, in the span of just two hours, I saw a pair of nesting owls and a peregrine falcon. Golden eagles are also commonly seen here. Colorado National Monument is high desert country, which means that although it can be scorching hot in the summer, winters can be very cold. Aridity is what the seasons have in common, though snow sometimes graces the sandstone and late summer sees a lot of thunderstorms. We have engineer John Otto to thank for the preservation of this landscape. Starting in 1907, Otto lived alone out in this country and loved it so much that he led the charge to protect the place as a national park. Inspired by him, many citizens of Grand Junction wrote letters to Washington urging the creation of the park. Otto also built trails out here so others could enjoy the natural beauty. In 1911, Colorado National Monument was established, and Otto became the park's caretaker and did that job for 16 years, earning only $1 a month, for it was really a labor of love. 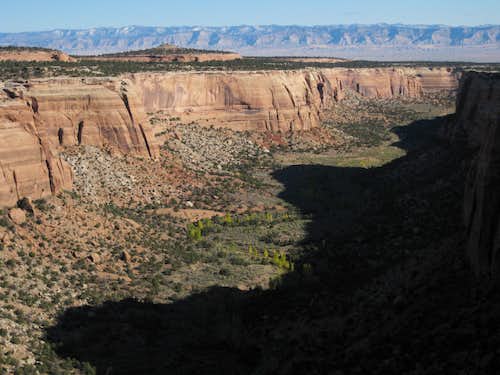 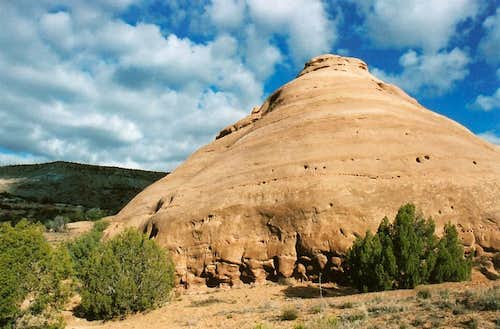 This region is adjacent to Colorado National Monument on its west side. It is administered by the BLM and contains the federally protected Black Ridge Canyons Wilderness, which itself is home to Rattlesnake Canyon, which has one of the largest concentrations of natural arches in the country (I believe it is second after Arches National Park). Nearby McDonald Creek Canyon has ancient rock art and pleasant desert hiking to an overlook of the Colorado River, and Rabbit's Ear Trail is a nice 2.5-mile hike to a plateau summit overlooking Ruby Canyon and the Colorado River. The latter two are not within designated wilderness areas but are closed to bikes and motorized vehicles. Many other portions of the area are open to mountain biking and ORV use. Boaters enjoy running the Colorado through Ruby Canyon. MCNCA stretches west from Colorado National Monument all the way to the Utah border and even spills into Utah a little bit. BRCWA is a hiking paradise because it is remote and does not see as much use as the national monument does. All around, there are wonderful opportunities for solitude and discovery once one is away from the dirt roads that frequently become clouds of dust and noise from the ORV use there. For more information, including maps and regulations, see the BLM site for the conservation area. 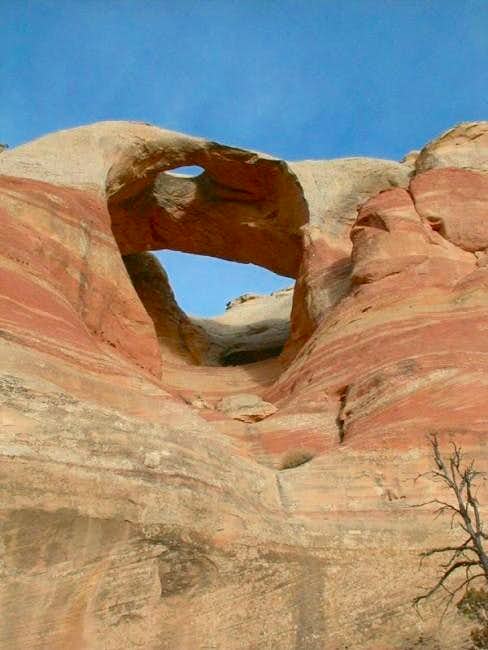 Take Care of the Crust

As much as possible, avoid stepping on the biological crust out here; it is alive and is critical to the desert ecology, and it is fragile. If the soil looks lumpy, dark, or crusty, avoid it. Better yet, try to stay on exposed rock and in sandy washes as much as you can. More about the crust...

There are outstanding objectives here for those who enjoy climbing on gritty sandstone. Cracks, walls, and towers galore await. Most routes are trad ones, but there are supposed to be a few aid routes, too. The classic route is probably Otto's Route (5.9) on Independence Monument, but there are many other named formations that are technical-only, and there are many opportunities here for first ascents. 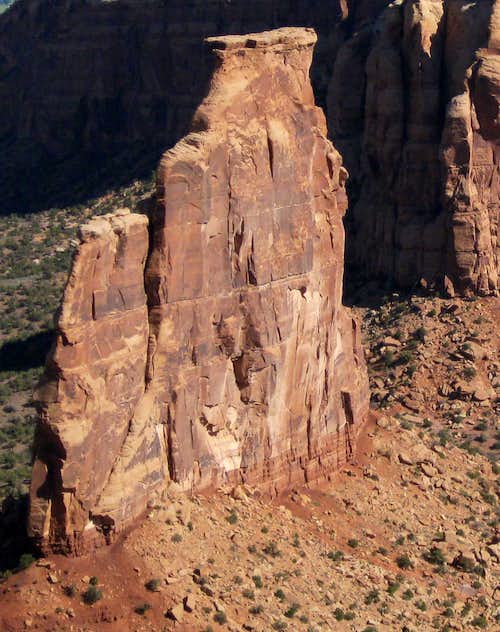 Independence Monument
Otto first climbed the route by himself on July 4, 1911. He carved steps and hand-drilled holes into the rock and fixed iron pipes for others to use as a "ladder" to the top. Now, it is a tradition for people to climb this peak by the same route (pipes are mostly gone...sorry) on Independence Day, and visitors may see a group on top waving an American flag. Some notable formations other than Independence Monument: • Pipe Organ • Kissing Couple • Coke Ovens • Squaw Fingers • Ute Canyon • Red Canyon • Devil's Kitchen 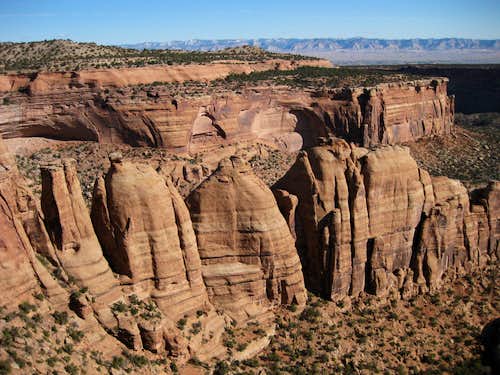 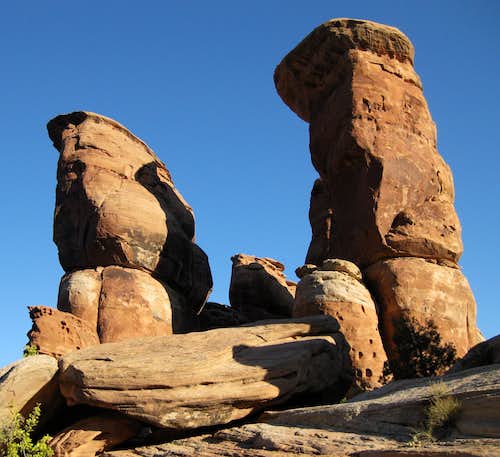 The following is copied from the NPS site for Colorado National Monument. Regulations: * No new permanent climbing hardware may be installed in any fixed location. If an existing bolt or other hardware item is unsafe, it may be replaced following consultation with park staff. This will limit all climbing to existing routes or new routes not requiring placement of fixed anchors. * The use of power tools to facilitate the installation of rock climbing hardware or for any other purpose is prohibited. * Climbing anchors and/or protection points may not be placed with the use of a hammer except to replace belay and rappel anchors and bolts on existing routes, or for emergency self-rescue. * The use of permanent anchor fixtures and hardware shall be installed or used for the protection of climbers on established climbing routes only, and only where such hardware devices now exist. * Software (webbing, accessory cord, etc.) that is left in place must match the rock surface in color. * The installation or use of permanent anchor fixtures and hardware must be brown or black. * Fixed ropes should not be left in place for more than 24 hours. Fixed ropes left in place longer than 24 hours shall be considered “abandoned property” and removed. * The physical altering of rock faces such as chiseling new holds is prohibited. * The intentional removal of lichen or plants from rock is prohibited. * Camping on the summit of Independence Monument is prohibited. * Chalk used for climbing must be of a color that blends in with the native rock. * The following areas and exposures are closed to recreational rock climbing: 1. Any exposure above any tunnel portal, aboriginal rock-art site, the Balanced Rock in Fruita Canyon, and Mushroom Rock below the northwestern rim of Monument Mesa near the mouth of Monument Canyon 2. Any area which has the potential to disturb naturally occurring wildlife activity, such as, but not limited to, feeding, mating, or nesting activities 3. Any climbing activity in an area which has the potential to damage an archeological site, historic structure, or paleontological resource is prohibited. 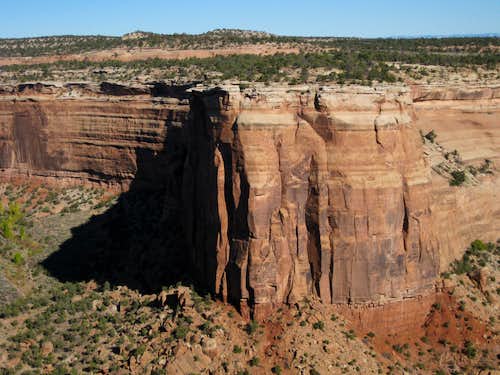 For those who like the convenience of climbing without gear, Colorado National Monument is a wonderland. They will be shut out from the best of the towers and peaks, of course, but options are otherwise virtually unlimited. With crags small and large, next to the road and in the backcountry, the question isn't where to go but where one cannot go, for possibilities are everywhere one looks. 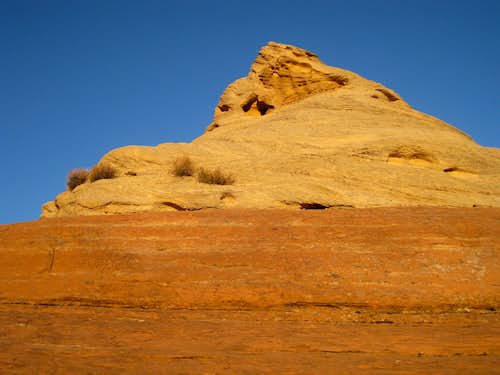 Scrambling objective near the eastern entrance and off the Serpents Trail
Some suggestions-- • At Devils Kitchen, near the eastern entrance, there are some scrambling- and bouldering-friendly outcrops around the towers there. Also, just south of the site is an unnamed peak with a summit plateau mostly guarded by cliffs but up which I found a Class 4 route, and an easier one might exist. • Cleopatras Couch is an outcrop next to the road between Monument Canyon View and Coke Ovens Overlook. It is a small formation and easy to climb, but it makes a good place for kids to play. 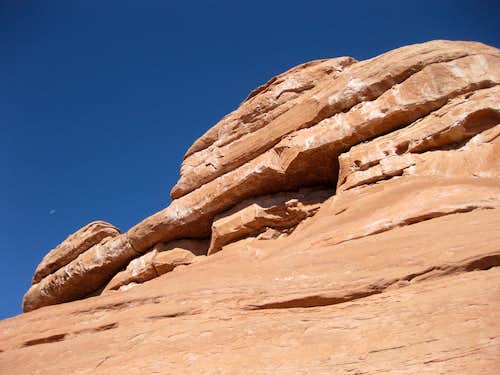 Cleopatras Couch
• Scramble up the Saddlehorn, a low sandstone summit by the visitor center and campground.

Most people seeking recreation here do it by hiking, and the monument, though small, has several nice trails for all ability levels. A sampling: • Ottos Trail-- a short, easy trail that leads to a grand overlook of the Pipe Organ and Monument Canyon. • Monument Canyon Trail-- One of the longer trails here, it runs for 6 miles from Rim Rock Drive to the monument boundary, descending steeply to the floor of Monument Canyon and passing many monoliths. • Coke Ovens Trail-- Branches off near the upper end of Monument Canyon Trail and leads for half a mile to a nice overlook of the Coke Ovens, high rounded formations that climbers can access from the Monument Canyon Trail. • Ute Canyon Trail-- Marked as an undeveloped trail, this route quickly drops into the canyon and then follows it for 7 miles, joining the Liberty Cap Trail close to its namesake formation. Liberty Cap Trail then descends steeply for 1.5 mi to the monument boundary. • Devils Kitchen Trail-- 0.75 mi in length and leads to Devil's Kitchen, a collection of free-standing towers and rock outcrops. • Serpents Trail-- This is an old road built by Jim Otto, now closed to vehicles. It climbs from east to west via over 50 switchbacks for 2.25 mi from Devils Kitchen Picnic Area to a tunnel on Rim Rock Drive. The trail is quite popular, and many seem to leave a car or bike at the upper end so that they only have a one-way hike.

There are some trailheads outside the monument, but the vast majority of visitors enter via Rim Rock Drive, accessed via Fruita and CO 340 from the west and via Grand Junction and Monument Road from the east. Signs in Grand Junction and Fruita direct drivers to the entrances.

Saddlehorn Campground, by the visitor center and close to the west entrance, has first-come, first-served sites, running water, and flush toilets. There is a nightly camping fee.