If you like panoramic views of unspoiled mountains, Guyot's peculiar double summit is one of the best places in the Whites, and perhaps in all of New England. From here you can take in nearly all of the Franconia Brook drainage (including the justly famous Franconia Ridge: Flume, Liberty, Little Haystack, Lincoln, Lafayette, and Garfield ) , nearly the entire Pemigewasset Wilderness (including close-ups of Bond and West Bond, and a view of Carrigain on the far side), and even (on a clear day) spot the great Presidential Range hovering beyond the Willey and Twin Ranges. All this without a hut or a highway in sight (except the weather station on Mt Washington ).

Guyot is roughly the 16th-tallest mountain in the Whites, depending on whose list you use - see Note on Elevation Rankings section below.

The top of Mount Guyot consists of two broad domes about a tenth of a mile apart. On my maps, the northern dome is designated the summit, though only the southern dome bears a large cairn such as you'd expect to see marking a summit. You can't see any height difference between the two either on maps or when standing on them. Hikers sometimes post their GPS altitude findings, but the accuracy of these measurements is open to question. A recent example found the south peak 3-4 meters higher in repeated measurements. Under ideal conditions, using WAAS corrections and a pole-mount antenna, the best GPS horizontal accuracy (Root Mean Square) I've seen reported is 2 meters, and vertical accuracy is at least 50% worse. A good barometric altimeter should be able to detect differences in the one-meter range, but I am not aware of anyone having tried this on Guyot.

Mount Guyot is one of the more remote peaks of the White Mountains and is commonly climbed as part of a multi-day trip. Accordingly, directions to the summit are divided into three sections: this section (Getting There) gives an idea of where to find the mountain on a map. The Trails section deals with the trails on or adjacent to the mountain itself, and assumes you're using a hut or established campsite as your starting point. The Starting Points section gives a very brief summary of the easiest way to reach these huts or campsites from a road.

Mount Guyot is part of the Twin Range, located in the northern half of that section of the White Mountain National Forest bounded on the West by interstate 93, on the north by route 3, on the northeast and east by route 302, and on the south by the Kancamagus Highway (route 112).

Mount Guyot is located at the center of the northern border of the Pemigewasset Wilderness, at the point where the north-south ridge of the Bonds joins the east-west main ridge of the Twin Range. If you have a trail map (and you should), look for the Y shape formed by the intersection of the southward-dipping Twinway with the Bondcliff Trail. Guyot's nearest neighbors are Zealand Mountain, the Bonds, and South Twin Mountain. Farther west and southwest, bordering Interstate 93, are the popular peaks of the Franconia Range. The famous Presidentials lie off to the Northeast, on the far side of Route 302.

The easiest way to get near the WMNF from anywhere is via Interstate 93. The easiest approach to Mount Guyot is probably via the Zealand Trail to the Zealand Hut. To get to the trailhead from 93, Route 3 to route 302 -- see the section on Starting Points for details. 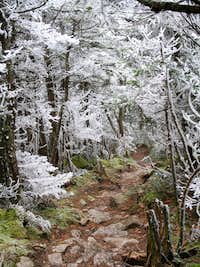 The (northern) summit of Guyot lies on the Twinway about a hundred feet east of its intersection with the Bondcliff Trail.

The Twinway runs roughly west-to-east more than seven miles from Galehead Hut to Zealand Falls Hut, with Guyot a bit west of the center.

The Bondcliff Trail runs south from Guyot's northern peak, over its southern peak, and passes a spur trail for Guyot Campsite in just over half a mile, before heading south to eventually connect with the Wilderness Trail.

Zealand Falls Hut An easy approach via the Zealand Trail. Trailhead is at the south end of Zealand Road, which leaves rte 302 about two miles east of the intersection with rte 3. Distance from trailhead to hut: 2.8 mi, 650 ft elevation.

Galehead Hut Easiest route is the Gale River Trail, which joins the Garfield Ridge Trail just west of the hut. The trailhead is on the Gale River Loop Road, which is reached by heading south from route 3 on Gale River Road (across rte 3 from Trudeau Rd -look for the sign for Ammonoosuc Ranger Station). The Loop Rd is a sharp right 1.3 miles down Gale River Rd, the trailhead is 0.3 miles down the Loop Rd on the left. Distance from trailhead to hut: 4.6mi, 2200 ft.
The following two campsites are located near enough to Galehead Hut to be considered as alternatives:
Thirteen Falls From the hut, descend 2.7 miles (1650 feet elevation) on the Twin Brook Trail.
Garfield Ridge From the hut, take the Garfield Ridge trail west 2.7 miles (850 feet elevation). This campsite can also be reached directly from Gale River Loop Road via the Garfield Trail (5 mi, 2700 feet elevation).

Guyot Campsite The routes to this site via the Twinway (ie, over the summit of Mount Guyot) are easier, but an approach from the South is also possible: From the trailhead just east of Hancock Campground on the Kancamagus Highway, take the Wilderness trail (note: the beginning portion is also known as the Lincoln Woods Trail), then turn left onto the Bondcliff trail. Total distance road to campsite: eleven miles, 3500 feet elevation.

White Mountain National Forest parking $3 per day. Advance purchase (at a discount) is available for multi-day stays or annual passes, or pay at the parking lot.

Year-round. Be prepared for the weather in any season - do not underestimate the effects of windchill.

In winter, expect sections of smooth, sloping ice near the summit, and be prepared for deep snowdrifts too, especially along the Bondcliff trail.

Trailside Campsites
First-come-first-served, Leave-No-Trace. In summer, there is a caretaker on duty and a fee charged. Find further details on the AMC's campsite list

Roadside Campgrounds
These are abundant in the area. Some that may be particularly convenient:
Hancock Campground Located at the start of the Lincoln Woods Trail, the shortest southern approach.
Sugarloaf I, Sugarloaf II, and Zealand campground are all located at the beginning of Zealand road, which provides the easiest access (via the Zealand Trail) to the Zealand Falls Hut.

Backcountry camping is also permitted. Here are the rules:

Unless otherwise posted, you may only camp:

Weather conditions on guyot's windy summit can be expected to be somewhat less extreme than on the highest summits, such as Mt Washington, but significantly worse than conditions in the valley.

To repeat, do not underestimate the effects of wind chill.

It is only natural for climbers to ask, "How high is this mountain"? Then it is only a matter of time before they wonder, "Where does it rank compared to other mountains"?

The answers to both these questions are surprisingly difficult. Despite huge advances in technology, getting precise elevation measurements is a tricky business. See this web page (thanks to Moni for pointing it out on a message board) for some details. Generally, hikers do their best to ignore elevation uncertainty and simply rely on the maps published by official government surveys - whatever numbers appear there are the ones used to compile elevation lists.

There is a further complication that is not as easily ignored. Suppose that Mountain A, the highest mountain in the state, has two peaks - A1 and A2. Both are higher than the summit of Mountain B. Does that make Mountain B the second-highest mountain in the state, or the third-highest? Most list-makers will include both A1 and A2 in their list if both A1 and A2 are "important enough." For example, the AMC Four Thousand Footers List , which many hikers treat as the "official list" for New Hampshire, includes only peaks that have at least 200 feet of prominence, meaning that the peak must rise at least two hundred feet above the low point of the highest ridge connecting it to a higher peak. In other words, the peak is counted if you MUST descend at least two hundred feet from it to reach a higher point. See the AMC 4000 footer FAQ.

It is not certain whether Guyot meets the AMC's prominence criterion. Counting contour lines on all the maps I've seen, it probably does, but it's a close call. Mt Guyot is not the only peak for which the maps do not provide a clear answer. On the original version of the list, all peaks with one "questionable col" {ie, connecting ridge that might descend less than 200 feet} were included, but Guyot was excluded because it has two such cols. The AMC has revised the list from time to time in response to new maps, but they consider the USGS maps to be "the final authority", and they have stated that they will not add or remove peaks until a revised maps unambiguously shows a need to do so. As the USGS is unlikely to issue doubly-precise maps anytime soon, Guyot may have to wait a while. Even more discouraging, the AMC recently broke its own rule by deciding to keep South Hancock on the list, even though its col is clearly too high on the newest USGS maps.