Cima delle Anime/Hinterer Seelenkogel 3472 m is a mountain of the Eastern Rhaetian Alps, subsector Ötztal Alps, and it is located along the border between Italy and Austria. As all the mountains in the region South Tyrol/Bolzano Alto Adige, located near the boundaries between Italy and Austria, this mountain has two names: Cima delle Anime, the italian name, and Hinterer Seelenkogel, the original tyrolese place-name. Cima delle Anime - meaning Peak of the Souls - is the italian name of Hinterer Seelenkogel and the meaning of this word doesn't coincide with the original Tyrolean place name. There are a few small tarns below the glaciers on the western slopes of the Seelenkogel. In the local Ötztalerischer dialect, See'len means small lakes - the corresponding German word is Seelein. Kogel means summit or peak, and so, translated literally, the name means peak of the small lakes. Sometimes it is written as See'lenkogel.

The south-eastern part of the Ötztal Alps is home to the three Seelenkogels. Extending roughly from north-west to south-east these are the Vorderer, Mittlerer and Hinterer Seelenkogel, meaning front, middle and back, respectively. The first two lie in Austria, the Hinterer lies on the border with Italy.

Photo description: View from West by North-West. On the left is the Eiskögele (3228 m), blocking the view to the Vorderer Seelenkogel (3290 m). Just left of center is the Mittlerer Seelenkogel (3426 m). Immediately next to it are two peaks, the second of which is the Hinterer Seelenkogel.

The Hinterer Seelenkogel is a high peak on the main ridge of the Alps. The route from Italy is popular, but not crowded. The peak towers over  the small Italian village of Plan / Pfelders in the Pfelderer valley stretching south and east of the mountain and can be climbed in one long day. On a straight line, the summit lies 3.5 km from the village - but at the same time it's 1850m higher! North-east and north lies the small Planferner (ferner = glacier). To the west lies the larger Seelenferner, which extends north to the Vorderer Seelenkogel.

Three ridges lead to the summit. The main ridge of the Alps follows the north-west and south-west ridges, changing direction on the summit. The normal route ascends over the east ridge, which lies completely in Italy.

In the other direction, the border follows the main ridge of the Alps to the south-west to the Rotegg (3341m) (46.794, 11.038). The next higher peak on the main ridge is the Südliche Hochwilde (3482m), with its fine exposed ridge to its northern twin summmit, the Nördliche Hochwilde (3461m), both just over 4 km away. The lowest point between Rotegg and Hochwilde is the Langtaler Joch (3035m), giving the Hinterer Seelenkogel a prominence of 437m. 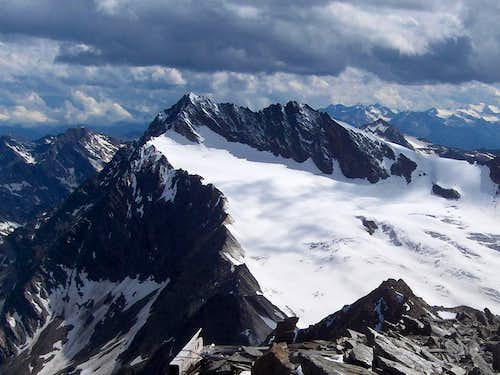 View along the main ridge of the alps to the Hochwilde, from the summit of the Hinterer Seelenkogel.

Plan/Pfelders  m. 1620 lies in the Pfelderer valley. This is a side valley of the larger Val Passiria. From Italy, head for the Timmelsjoch, which lies at the end of the Val Passiria valley, but before crossing the pass, go left to Plan in the village of Moso in Passiria.

Coming from the north, there are two options. Either enter Italy on the Brenner highway and then at Sterzing, just over the border, go west to the Timmelsjoch. Alternatively, take the scenic route down the Ötztal and over the Timmelsjoch and, after crossing the pass, go right to Pfelders / Plan in the village of Moos in Passeier.

The reason for the popularity of this peak is that the normal route does not cross any glaciers. From the Refuge Plan (Zwickauer Hutte) m. 2980 the route ascends the East ridge for about 1.5 of hiking and scrambling (UIAA I). There are cairns, painted markers and, for a short stretch, a steel cable. In good conditions and visibility, you don't really need any of that.

The approach to the Zwickauerhütte

Hiking from Pfelds to the Zwickauerhütte takes about 4 hours on a good trail. From Plan/Pfelders (hotels) the itinerary always follows the path 6a. Climb the steep grassy slopes and debris, touching Malga Schneid (Schneidalm - m. 2.159). From the pasture we continue with steep serpentines up to the rocky buttress of Oberer Schneid (m. 2.371) and from here, along the back of a steep ridge, we arrive to Refuge Plan (Zwickauer Hütte - 2979 m, 4 hours), possible dinner and overnight.

A much quieter alternative is to start in Obergurgl, Austria. Take the cable car (or hike) to the Hohe Mut (2630m). From there, follow a marked trail along the broad ridge to the SE, leading to the Rotmoosferner (ferner means glacier). Day hikers regularly walk up to the glacier, but not on it, and usually there is no trail anymore. Once on the glacier, aim south for the Rotmoosjoch (3055m) (46.808, 11.055). Watch out for crevasses! In bad weather, good route finding skills (or a GPS) are important, or you might find yourself at a different pass altogether. From Hohe Mut to the Zwickauerhütte takes about 3 hours.

From Refuge Plan take the red marked trail to a fork just beyond the shelter itself. Always following cairns and red marks, start to climb the East ridge up on easy rocks, steps and large blocks, overcoming some passages equipped with fixed steel cables, always without particular difficulty. The climb leads to the foresummit, then to the wooden summit cross on the top (about 1.30 hours from the shelter).The view from the top is 360° wide over all the major peaks of the Val Venosta and also the Dolomites

The Rifugio Plan (Zwickauerhütte) 2980 m is situated right next to the mountain, where the East ridge flattens out a bit.
In winter, Obergurgl is a popular ski resort, Pfelders a smaller one. As a result, there are lots of accomodation options and as there are much fewer people in summer, it's easy to find a place to stay.

Coming from Italy: sturdy hiking shoes, suitable for a bit of scrambling. If you want to rope up for the scramble: rope and harness.
Coming from Austria: full glacier gear.

Personal thoughts on the Italian name
Seele is German for soul, and the Italian name Cima delle Anime literally means Peak of the souls. However, as stated above, the name Seelenkogel isn't derived from Seele at all, and that makes me believe that the incorrect translation has been originally coined by someone unfamiliar with the local dialect.

Until 1918, this region of Italy was part of Austria. At the end of the first world war, it became part of Italy, but, naturally, the people living there didn't suddenly start speaking Italian. For a long time however, the German language wasn't officially recognized by the Italian authorities.

My hypothesis is that during this period, an Italian in charge of translating German names, but not really familiar with the area, came up with Cima delle Anime. Perhaps someone in Rome? Maybe a historian can look into this ...