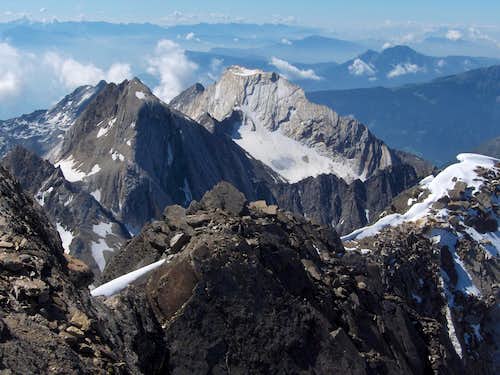 As all the mountains in the region South Tyrol/Bolzano Alto Adige, located near the boundaries between Italy and Austria, this mountain has two names: L'Altissima, the italian name, and Hochwilde, the original tyrolese place-name. Although not the highest in the area, the Hochwilde (also known as Hohe Wilde) is quite a popular mountain on the main ridge of the Alpi Venoste - Ötztaler Alps, on the border from Italy and Austria. There are several good reasons for that.

First of all, the summit features superb views of the surrounding Ötztal Alps, with impressive glaciers to the North and Northwest, and the rough mountains of the Texel group to the South and the East. And, on a clear day, you can enjoy the distant views of the Dolomites as well as the Ortler and Bernina groups. 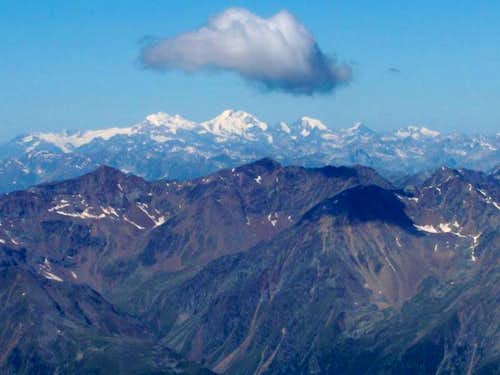 The Bernina range lies 100 km to the south west, but on a good day, you can clearly see the high peaks. Appearing under the cloud, from left to right: Piz Palü, Piz Bernina and Piz Morteratsch.
The Normal route from the South side, from Italy, starts from Rifugio Petrarca all' Altissima/Stettiner Hütte, the mountain refuge at its base (info 2020: currently under reconstruction, there are temporary prefabricated structures). If staying overnight here, the route is relatively short. As a result, those on the Meraner Höhenweg, a long distance trail in the Texel Group, can easily add it to their itinerary. If climbing directly from Plan it's instead a long itinerary (about 23 km) combined with the important difference in height. The final rocky part is in some sections aided with metal cables that facilitate the climb. It is not essential to have the via ferrata set, even if for those who do not feel safe it could be useful.
Not recommended in the presence of snow.

A few words
The Hochwilde has two distinct summits, connected by a rocky ridge (UIAA grade II), secured by steel cables along some more difficult sections. The Südliche Hochwilde (3482m) is the main summit. The Nördliche Hochwilde (3461m), which actually lies almost 400m to the northwest, is harder to reach, because either you have to climb the ridge, or cross the Gurgler Ferner, which, although rapidly retreating, is still one of the biggest glaciers in the eastern Alps.

A zoomed in view of the distant Dolomites from high on the Hochwilde southern trail.The glaciated peak dead center, far, far away, is Marmolada (3343m), the queen of the Dolomites. Distance 73 km, heading 120°. Just behind it to the left is Monte Civetta (3220m). Distance 90 km, 118°. The most distant mountain in the photo is the very light blue pyramid to the left, Monte Antelao (3264m), the king of the Dolomites. Distance 101km, 110°. The ridge of jagged peaks near the right hand side is the Pale di San Martino group. Distance 81km, 130°.With thanks to Ulrich Deuschle, who's excellent site was instrumental in determining all this.

The nearest village is Pfelders / Plan (Italy) (1628m) to the east. About the same distance and elevation, but to the west, is the Vorderkaser parking lot (1673m). From either of these trailheads, the mountain can be climbed in a long day.

In addition to these two options, there are several alternatives if you have more than a day - and the area is well worth a longer visit. 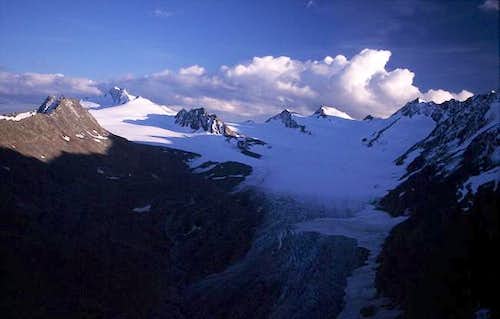 The Gurgler Ferner in 2002, seen from Ramolhaus. From left to right, the mountains are Schwärzenkamm, Hochwilde, Annakogel, Mitterkamm, Bankkogel and Falschunggspitze.
The village of Obergurgl (Austria) is the best if you want lots of glacier scenery. There are many possibilities for multi day trips from there that include the Hochwilde.

Alternatively, to explore more of the Texel group, the village of Partschins / Parcines (Italy) (680m) to the south is conveniently located. Although very low, the Texelbahn cable car can quickly whisk you up to 1544m. From there you can hike to the Stettiner Hütte via the Johannisscharte in a day, or choose one of several routes to the Lodnerhütte (2262m), from where you can ascend the Hochwilde the next day.

Plan/Pfelders lies in the Val di Plan/Pfelderer valley. This is a side valley of the larger Val Passiria/Passeier valley. From Italy, head for the Passo del Rombo/Timmelsjoch, which lies at the end of the Val Passiria, but before crossing the pass, go left to Plan in the village of Moso in Passiria/Moos in Passeier.

Coming from the north, there are two options. Either enter Italy on the Brenner highway and then at Sterzing, just over the border, go west to the Passo del Rombo. Alternatively, take the scenic route down the Ötztal and over the Timmelsjoch and, after crossing the pass, go right to Pfelders / Plan in the village of Moos in Passeier. 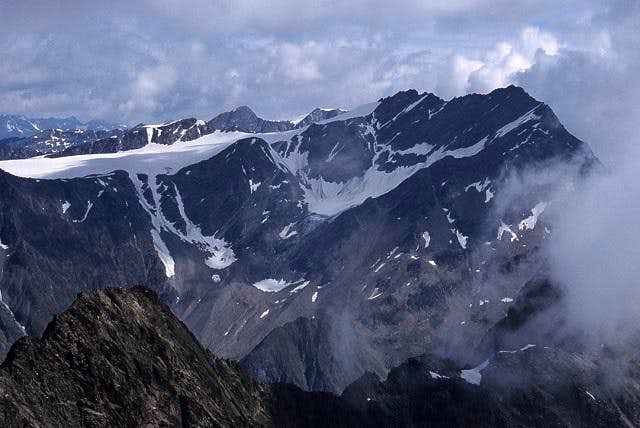 Hochwilde seen from the southwest, from Roteck. The ridge between north and south summit is clearly visible, with the southern one on the far right. The small rocky ridge on the left is Annakogel.
Did you see that the peaks in the center are lighter? These are the Mittlerer Seelenkogel and part of the Hinterer Seelenkogel, 4 km further back.

Partschins / Parcines is a small village in the Vinschgau valley, a few kilometers west of the pleasant town of Meran / Merano, which can be reached by train from all directions. There is a bus stop at the Texelbahn valley station, or you can take a local train to Rabland / Rablá, right next to Partschins and walk to the Texelbahn in half an hour.

The Pfossental is a side valley of the Schnalstal / Val Senales. The entrance is close to the pretty small village of Karthaus.

Just like the Pfossental, the Schnalstal is a dead end too: the only way in is from the Vinschgau valley, at Kompatsch / Compaccio. 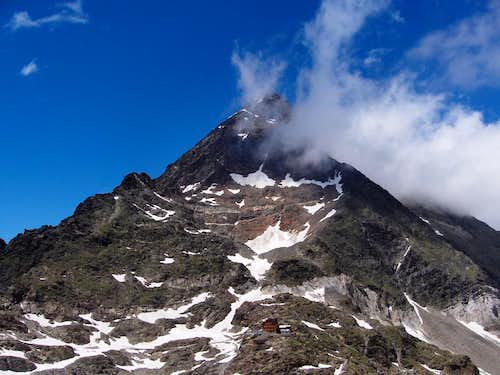 The Hochwilde towering 500m over the diminutive Stettiner Hütte

Normal route from the South

From the Rifugio Petrarca/Stettiner Hütte, a marked trail leads all the way to the south summit. After a rockfall incident in 2008 high on the route and the ensuing investigation, it was decided the old route was too dangerous. A new route has been constructed recently. The name of the route is the same, "Grützmacher-Steig". From the hut continue upstream, going up a shoulder of rocks and grass passing near a vein of quartzite, then gaining a ridge at the edge of the small residual glacier-snowfield under the southern slope of the mountain. There is a small melting lake.

On a good path, always quite steep, continue climbing keeping close to the South-East ridge until you meet a crossroads: on the right the old track no longer usable due to landslides, on the left you continue on the new path, which is partially aided by iron ropes. In this way, some sections of easy climbing on steps, debris terraces, and areas of stones with good traces alternate with others with short cables that help the progression. We move gradually until we reach the South ridge of the mountain; from here continue to the right, first on the wire then again on the south-east side on an easy path up to a short exposed slab and just beyond a vertical wall of 5 m (exposed) facilitated by cable and 3 metal steps . After passing it, continue along easy rocks until you get back to the ridge, now just a few meters from the top. Follow a short, thinner passage than the ridge, then lowering to the right, you go around the cross and reach the large summit plateau, surmounted by the cross.


Normal route from the north

Normally starting at the Hochwildehaus, the route from the north leads over the Gurgler glacier to the northern base of the rocky ridge. From there it's just a short climb to the northern summit, followed by almost 400m along the ridge to the south summit (UIAA grade II), secured by cables. This route is frequently combined with the traverse of Annakogel and is called the "Gustav-Becker-Weg".

In winter and early spring it is possible to ski down all the way to Obergurgl by a couple of different, very long routes. One route follows the Langtalereck Ferner, starting well below the south summit, and also a bit north to northeast, another follows the Gurgler Ferner from just below the north summit. 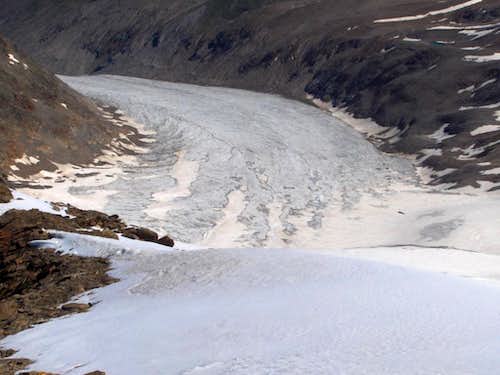 Summer and early fall are the season for hiking up to the south summit from Italy, or traversing the grade II ridge. The best period is from June to September, as long as there isn't too much snow. In 2007 for example, a big cold front resulted in a lot of fresh snow in the Alps early September, creating serious avalanche risk and making the southern route too dangerous.
In late winter and in spring it is possible to ski down the mountain to Obergurgl, but not quite from the summit. 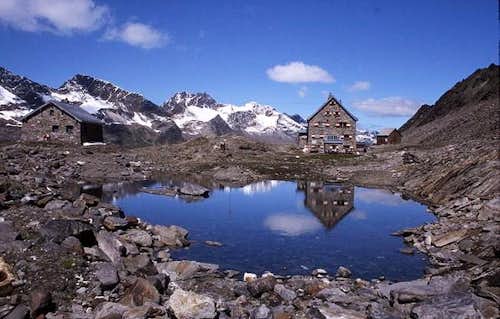 The Hochwildehaus (2883 m) is the usual starting point for climbers of Hochwilde from the north. In the background are Spiegelkogel and Ramolkogel.
Camping is not allowed. The nearest huts are:


Note: Early 2014, the Rifugio Petrarca was struck by an avalanche. Work began in summer 2020. While waiting for the new building, temporary wooden houses with attached toilets were built to allow hikers to stay overnight.

Alpenvereinskarte Ötztaler Alpen 30/1 Gurgl, scale 1:25 000 is indispensable when coming from the north.
There are quite a few suitable maps covering the Texel Group to the south. A very good free one, scale 1:50 000, is available at the Texelbahn cable car station.