Similaun is one of the classic glacier mountains of the Ötztal Alps – or perhaps the most classic for some reasons.

The normal route to Similaun is a rather easy glacier walk with a nice little firn ridge at the end. So it is the ideal trip for beginners and thousands (including me) have climbed Similaun as their first glacier mountain.

Smilaun was also well-known for its icy north face. But as a tribute to global warming the ice has melted completely in the upper part in the last decade. So this climb can only be done in spring after a winter with much snow. Much more popular nowerdays is climbing Similaun with ski in spring, often as a part of the multi-day route "Venter Ski-Runde" 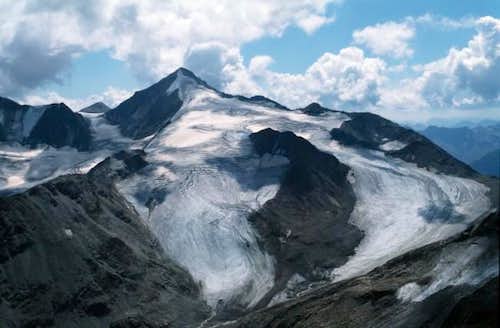 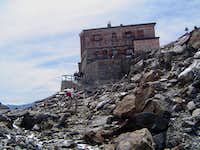 The Similaunhütte is situated above the W-side of the Niederjochglacier on italian territory. Official border transition: 30. june to 30. september.

Rahel was the original writer of this page. She was a skilled and enthusiastic climber with a preferrence for north faces and had climbed Similaun north face in 1999.

Rahel froze to death on 24/25th August 2004 in a heavy snowstorm during a climb of the Innominata Spur on the southern (Italian) face of Mont Blanc. She was only 34 years old.

currently because of an explosion. For actual info please check "www.alpenverein.at"

Did Similaun on dec. 31 '05 from MBuschhutte, because there was no open winterraum in Similaunhut (so we were told in the tourist office in Vent)...