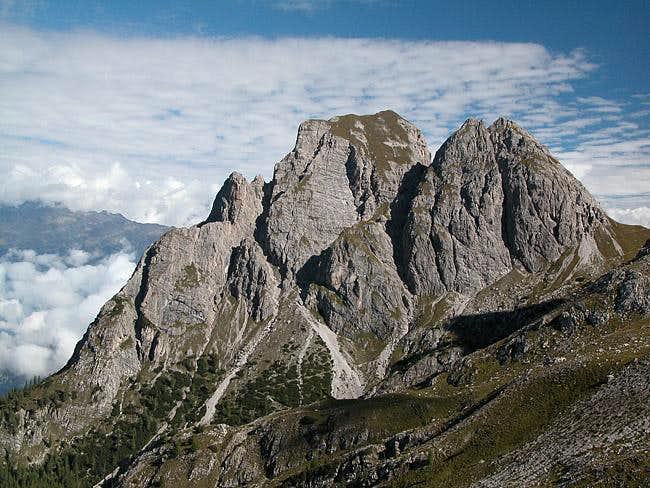 And yes, a great lookout peak it is, Kleine Gamswiesenspitze. It is located at the centre of the Lienz Dolomites mountain range as one of a quadruplet of peaks lined up on the western side of the Laserzbach Valley. It is not the highest one as its name implies - beside Kleine (little) Gamswiesenspitze to the north you can find Grosse (big) Gamswiesenspitze. The other two summits are Kerschbaumer Törlkopf to the south of the quadruplet and Blosskofel to its north.

The central location and its elevation make the peak a good one to look out from (I must have said this somewhere before). To the east you'll find the Laserzgroup with Laserzwand, Roter Turm and Sandspitzen. To the east there are the wide Kerschbaumer Tal and Hallebachtal Valleys which are flanked by Weittalspitze, Kreuzkofel and Spitzkofel. The normal route along the southern flank is rated II while the climbing route has pitches of up to grade IV-.

While the southern ascent from Kerschbaumer Törl is a steep scramble reaching UIAA II only in a couple of places there is a serious climbing route along the north-eastern edge. It is a 250m, 7 pitch route rated UIAA IV-. You can find infos on the following two pages, both in German with topos:
Neighbouring Große Gamswiesenspitze and Bloßkofel can be reached by a ferrata, which is decribed (again in German) here:

Clicking on this topo will take you to www.styria-alpin.at


Views from the summit

To prove that the mountain is on of the best lookouts of the Lienz Dolomites here a handful of pictures taken in all directions.

From the West (Brenner Motorway A22)
Leave the Brenner Motorway near Brixen / Bressanone and follow SS49 to the east through Pustertal / Val Pusteria. To the east of Innichen / San Candido you cross the Austrian - Italian border and follow the road (now B100) to Burgfrieden. For Klammbrückl turn right (east) here onto a side road, which you follow to its end at the Klammbrückl parking lot. For Lienz and the trailhead at Lienzer Dolomiten Hütte remain on B100 until you reach the city. Here turn right, direction Tristach and cross the Drau River to its southern side. From Tristach the "Dolomitenstrasse" the road into the Lienz Dolomites, is marked by signposts. Follow this road (toll!!) until you reach Lienzer Dolomitenhütte.

From the North
There are two possible roads:
From the South (Udine)
Take Motorway A23 to the exit Camia Tolmezzo. Follow SS52 north to Tolmezzo where you turn onto SS52 bis. This leads to Plöckenpass, where it crosses the Austrian-Italian border. In Austria the road turns into B100 and at Oberdrauburg turn west (still B100) to Görtschach etc.

There's no red tape here. Dogs have to be kept on leash because of grazing sheep but that is about all. Don't camp, rather use the huts (Karlsbader Hütte or Kerschbaumer Schutzhütte) which are an hour away at most.

The best time is June through late September. Winter climbs might be possible but you need to be experienced to climb a summit this steep.

The Lienz Dolomites are located directly on the border between the two Austrian states Carinthia and East Tyrol, so for a weather report look at one of the pages below:.

Maps
I have been using a map by Kompass Verlag, which is very good for the hiking trails though it does not show ALL the relevant summits of the area.
Books
Hiking and Trekking