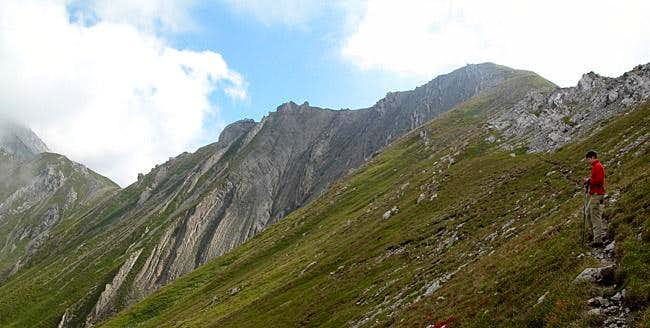 Riebenkofel is the southernmost summit of the small ridge that leaves the Lienz Dolomites at Grubenspitz and heads southward across Böses Weibele. On the other hand it is the endpoint of the Wildensendertal Valley which is cut deep into the limestone of the Lienz Dolomites. The summit is a popular destination among the folk who stay at the Spa resort of Tuffbad, mainly because it is close and offers great views towards the Lienz Dolomites and Carnic Alps. It is also very popular among the goats and sheep of the area, so finding a clean spot to sit down for your summit lunch is quite challenging.

The mountain, however, is also quite interesting from a geological point of view. The mountain towers over Lesachtal Valley, which is the location, where the North-African and European tectonic plates meet. During the formation of the Alps the mountains north and south of it got virtually turned upside down by great upheavals. In the Carnic Alps this caused rocks of different composition to be thrown on top while in the Lienz dolomites you can see it in the different layering directions which summits, close to each other show in their flanks. Just have a look at the grooves in the picture above to get the idea.

These grooves actually gave Riebenkofel its name. Rieben is a dialect form which directly translates into 'grooves'. However only from the western side the summit block displays them. From all other sides there are meadows straight to its top, however steep they may be. The ridge traverse towards the centre of the Lienz Dolomites is rather exposed and mostly used for the ascent of neighbouring Böses Weibele.

There are two reasonable trailheads for ascending Riebenkofel, both located to the north of the Lesachtal Valley. The hamlet Assing can be reached by turning north from Liesing and the Spa resort Tuffbad is located north of St. Lorenzen.

How to get to Lesachtal

From the West (Brenner Motorway A22)
Leave the Brenner Motorway near Brixen / Bressanone and follow SS49 to the east through Pustertal / Val Pusteria. To the east of Innichen / San Candido you cross the Austrian-Italian border and follow the road (now B100) to Tassenbach. Turn right (south-east) here onto B111, which you follow to St. Lorenzen or Liesing, depending on your preferred trailhead.

From the North
There are two possible roads:
From the South (Udine)
Take Motorway A23 to the exit Camia Tolmezzo. Follow SS52 north to Tolmezzo where you turn onto SS52 bis. This leads to Plöckenpass, where it crosses the Austro-Italian border. In Austria the road turns into B100 and at Kötschach-Mauthen you have to turn east on B111 into Lesachtal Valley.

There's no red tape here. The sheep droppings on top of Riebenkofel (why do they always have to do it on mountaintops?) remind you that the area is used for extensive grazing. Camping is not permitted and gates should be kept closed.

The climbing season runs from early June through late September with some days in October also nice and sunny. The mountain is an easy hike and thus also possible for ski tours in winter. The best ascent route by ski is the one from Liesing to Milnazen Saddle and from there to Riebenkofel.

There are no large campgrounds in the area - the nearest one is at Kötschach-Mauthen. In most of the villages, however, you will find an inn or a hotel, where you can camp on the surrounding meadows for a small fee.

If you are looking for hotel rooms or apartments follow one of the links below.

In general the weather in Lesachtal is very sunny (much better than in the rest of Austria. Locals will tell you that often the days start out foggy but that around noon the sun starts coming through. Exactly this happened during our ascent.

For up to date weather information follow one the links below.

Maps
I have been using a map by Kompass Verlag, which is very good for the hiking trails though it does not show ALL the relevant summits of the area.
Books
You’ll probably not be able to find anything on the Lienz Dolomites in a language other than German. The books I used are (both describe the ascents of Riebenkofel ):