The Lienz Dolomites are a small mountain range in the south of Austria separated in equal parts into the states of Carinthia and East Tyrol. Though it carries the name "Dolomites" it is generally not counted among the regular Dolomites Groups, a fate also shared by the Brenta Dolomites. Both groups differ geologically from the rest of the Dolomites but the main reason for considering them a world apart is the respective location far from the heart of the mountain group. While Brenta is located on the far (western) side of the Etsch/Adige valley, the Lienz Dolomites are located to the north of the Pustertal and Lesachtal Valleys with a couple of mountain ranges in between.

From a geographical standpoint the Lienz Dolomites belong to the Gailtal Alps, a mountain range wedged between the valleys of the Drau and Gail Rivers. They make up the western part of the mountain range and contain the highest and most impressive mountains of the whole Gailtal Alps. The eastern remainder of the range can be considered as a number of high hills thrown in together with no distinctive ridges.

Partly this statement holds true even for the Lienz Dolomites. The group, though rather small, is very complex in its various ridgelines. Seen from the outside you often have problems to distinguish the locations of the various summits. All seems very chaotic and from different sides the group looks utterly different. Once inside the heart of the Lienz Dolomites, however, the structure reveals itself. A small number of short but very deep valleys leads into the group and separates it into distinctive subgroups. The summits themselves are not impressively high - Große Sandspitze, the highest peak (also the highest summit of the Gailtal Alps) is a mere 2770m high - but their base starts at around 650m. From the tops of the mountains you look into the Drau River Valley 2000m below!

There are four mountains which require a little more attention than the others: Eggenkofel (2591m), Spitzkofel (2717m), Weittalspitze (2539m) and Hochstadel (2681m). The four are rather solitarily located at the four ends of the group. With the exception of Eggenkofel they all can be reached by "Klettersteige" / "Ferrate" (paths secured by fixed cables ladders and bolts) and offer perfect but utterly varying views into the heart of the mountain group.

The heart of the mountain range is the Laserz Group, located in a circle around the deep blue Laserz Lake. Both Sandspitzen, both Keilspitzen, both Gamswiesenspitzen belong to this group. It is here that the name Dolomites really makes sense. The rock composition is solid limestone, in several locations even Schlern- or Main-Dolomite. The rock is very solid whereas in the outlying region of the group you have to struggle with loose and brittle stretches. A difficult ferrata to Kleine Sandspitze can be climbed and the traverse to Große Sandspitze is reportedly one of the most beautiful climbs outside the proper Dolomites.

There is one great drawback when hiking/trekking/climbing in the Lienz Dolomites: you will find it difficult to find information on the mountain range. There have been a couple of books published in the 1980ies but they have been long out of print. The only hiking guide I have come across is the one by Rother Verlag, listed in the Maps & Books section. Though generally excellent as a hiking guide it doesn't reveal anything about ferrate or even climbing routes. Therefore I want to invite all who have travelled in the group to share their knowledge on this page.

As said above, the structure of the Lienz Dolomites doesn't reveal itself at first glance. I was puzzled very much after having seen the group from Hochstadel, Eggenkofel and Peralba in the Carnic Alps. I just couldn't match the mountains I saw to the names on my map. After hiking into the heart of the Laserz Group via the north - south traverse things became much clearer so that I feel confident that the following subgrouping structure can be applied. The names, however, are my own inventions, linked to the most important mountains of the respective groups. Please refer to the little map posted above. The Eggenkofel Group seen from Gumriaul in the northwest
This Subgroup is the westernmost part of the Lienz Dolomites. It is located in the "wedge" between the Drau and Gailbach Valleys (the latter is called Tyrol Gailtal). The eastern border is the Eggenbach Valley which meets the Leisacher Almbach Valley in the centre of the Lienz Dolomites. The traverse through these two valleys is one of the oldest pilgrimage routes of the area and ends in the south at Maria Luggau, a renowned pilgrimage destination. The Eggenkofel Group cannot be easily divided further into subgroups or ridges. There is only one ridge to the south; most of the other mountains stand solitarily. The following listing is given from west to east. This is the largest of the subgroups. It is defined by the valleys rather than the mountains, though the summits really are impressive. Northern and Southern boundaries are the Drau and Gail River Valleys again. To the west the combination of Eggenbach and Leisacher Almbach bound the group while to the east it is the combination of the lower Wildensenderbach Valley to the south and the Kerschbaumertal Valley to the north which are connected by the beautiful Zochenpass. The Group is composed by three ridges which all run roughly west to east. 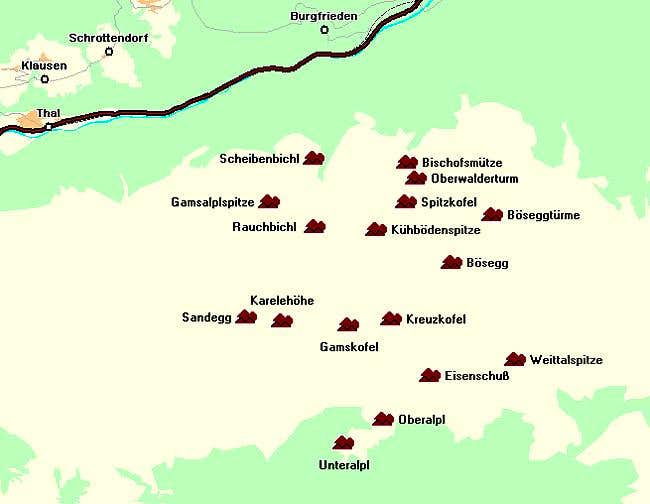 The heart of the Lienz Dolomites, the Laserz Group as seen from Laserz Lake

The Laserz Group is a beautiful compact Dolomite Group. It consists of a circle of mountains located around Laserz Lake in the middle with a second ridge to the east. Its boundaries are the Drau River in the north, Kerscbaumertal in the west, the upper Wildensendertal Valley in the south and Frauenbach Valley to the northeast. There is a small subgroup located to the north of Laserz which will be counted to this subgroup though it definitely is separate. 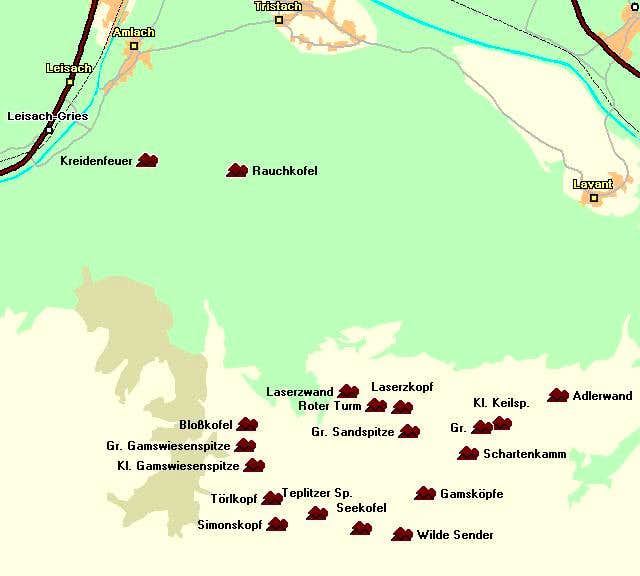 Hochstadel Ridge as seen from the south from the Lumkofel summit

Though the most important mountain of this group is located at its eastern end this ridge carries its name. By some accounts Hochstadel is home to the third highest face of the Eastern Alps. The north face measures 1300m from its base to the summit. The remainder of the summits of this group are far less impressive with the possible exception of Grubenspitz which is a perfect summit pyramid showing the history of the Dolomites in its beautiful layering. The ridge in between is part of the "Drei Törl Weg" trekking trail, which starts at Laserz and ends at Unholdenalm to the east of Hochstadel. The summits are listed east to west. 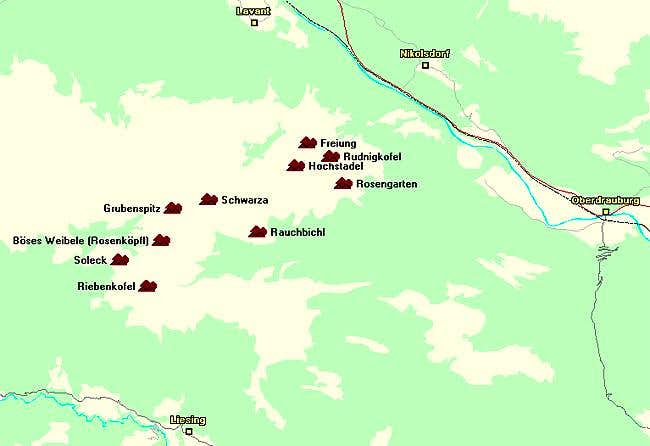 To speak of a group is a little bit presumptous in this case. It is a loose collection of grassy summits to the southwest of the Lienz Dolomites. With the exception of Lumkofel, which shows an almost vertical north face the mountains wouldn't be deemed to deserve the name Dolomites. Yet the rock composition tells a different story. This group is a good example for the remainder of the Gailtal Alps, which follow to the east. But for the fact that Silbergraben is considered the eastern boundary of the Lienz Dolomites this subgroup would certainly not be counted among the groups of the mountain range. The southern bouandary is the Gail River Valley, the western one is Milnazen Saddle between Milnazenkofel and Riebenkofel, the northern boundary is the Drau River Valley. 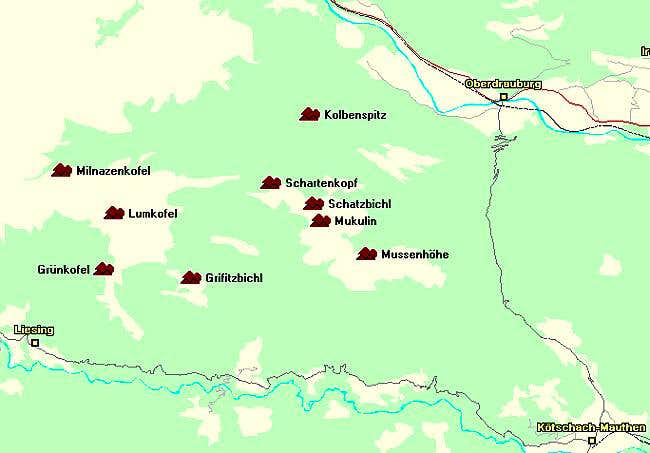 The Lienz Dolomites are located in the soutern part of Austria on the border between the two states Carinthia and East Tyrol. The best ways to reach the area are as follows:

From the West (Brenner Motorway A22)
Leave the Brenner Motorway near Brixen / Bressanone and follow SS49 to the east through Pustertal / Val Pusteria. To the east of Innichen / San Candido you cross the Austrian - Italian border. Here the road is called B100 and heads for the city of Lienz. At Sillian you reach the western tip of the group and now can either choose to go on to Lienz via B100 or into Lesachtal Valley via B111, which turns east at Tassenbach.

From the North
There are two possible roads:
From the South (Udine)
Take Motorway A23 to the exit Camia Tolmezzo. Follow SS52 north to Tolmezzo where you turn onto SS52 bis. This leads to Plöckenpass, where it crosses the Austrian-Italian border. In Austria the road turns into B100 and at Kötschach-Mauthen you need to decide either for the northern road (B100 to Oberdrauburg) or the southern one (B111 through Lesachtal Valley).

Strangely enough, for such a great mountain range there are no restrictions. The northern access costs some 7€ if you drive by car, I have seen signs in which you are urged to keep your dogs on leash (because of the grazing sheep) and you are asked to close gates after you. Camping is discouraged and not really necessary because of the refuges and Alm houses you can find in the area.

Hiking season is late June through late September. I'm not sure the area is safe for winter ascents. As for ski tours the southern part (Lumkofel Group) is great. There is a nice ski tour around the Laserz Group (through the bounding valleys) and obviously one upon Kleine Sandspitze. I have seen pictures about a ski tour ascent of Weittalspitze as well but that seems to be pretty hardcore to me. On the other hand - i don't ski myself and maybe it appears to be more difficult than it really is.

Listed here are the refuges as well as the Alms, Farms where you can get food and lodging.

Free camping in the group is discouraged. There are three quite a number of refuges all over the Lienz Dolomites (see above) so it should be not neccesary to pitch a tent. In Lesachtal many of the villages sport small campgrounds which are managed by proprietors of one of the
inns or hotels. If you are looking for hotel rooms or apartments follow one of the links below

The Lienz Dolomites are located directly on the border between the two Austrian states Carinthia and East Tyrol, so for a weather report look at one of the pages below:.

Maps
I have been using a map by Kompass Verlag, which is very good for the hiking trails though it does not show ALL the relevant summits of the Lienz Dolomites. The group is small and at 1:50000 you cannot show all summits.
Books
You’ll probably not be able to find much on the Lienz Dolomites in a language other than German. There is not much information on the mountain range. I have used the following book which is available in German and Italian: