The Latemar Group is one of the smallest groups of the whole Dolomites. It is located farthest to the west, southwest of Rosengarten / Catinaccio and northwest of Pale di San Martino. Its north faces build a massive front towards Eggental / Val d’Ega not unlike the Geisler / Odle Group further to the north. The group is located on the border between the provinces of Trento and Bolzano / Bozen, in the triangle between Eggental / Val d’Ega to the west, Karerpass / Passo di Costalunga in the north and Val di Fassa as well as Val di Fiemme in the southeast.

Latemar is best known for the view from Karersee / Lago di Carezza, an alpine lake in which the north faces of the group are mirrored perfectly. Moreover it is a popular hiking destination. Apart from one ferrata between between Forcella dei Campanili and Forca Latemar Grande all trails are rather easy but solitary and sometimes very long and demanding. The region thus remains quite lonely even in summer, especially if you compare it to neighbouring Rosengarten / Catinaccio. Latemar is NOT known for its climbing possibilities. There certainly are a number of routes but the rock is too fragile for the routes to be interesting. Here again Latemar compares to the Geisler/Odle Group where you also can find only inferior climbing (with a couple of noteworthy exceptions, of course).

Latemar consists of two subgroups. The larger one to the north consists of a large ridge which runs in an almost circular from Cima Popa / Poppekanzel in the northeast to Torre dei Muss in the southeast. Seen from above (or on a map) it clearly shows its origin – an atoll in the Thetis Sea, millions of years ago. This part of Latemar contains the highest and most impressive summits of the group, like the Latemar Towers or Torre di Pisa, a leaning tower like its namesake in Tuscany further to the south.

The second subgroup is grouped around Monte Agnello. From this center summit four ridges run towards all directions. The summits themselves however are much lower than the ones of the northern group.

Thanks (again) to livioz for helping out with the maps ;-)

As stated in the overview section above, the northern subgroup is formed like an amphitheatre with a long northern ridge, a smaller and heavily eroded western one and a short southern ridge. The amphitheatre is open to the east through the deep Valsorda Valley. In contrast to the southern subgroup, the summits of which have only Italian names, in this part of Latemar both languages – German and Italian – are used. Elevations are sometimes denoted differently on Italian and Austrian maps. Also, the summits themselves are denoted quite differently so that I had to try to merge the data. Therefore names and altitudes might deviate from the values you find on your own favourite maps. The summits are listed from northeast to southeast along the circular ridgeline. 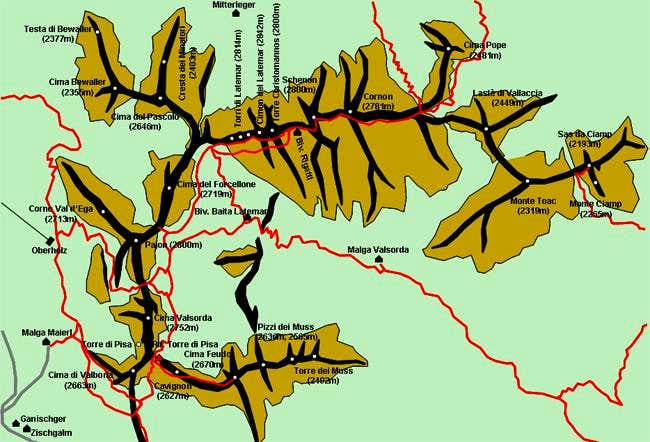 Monte Agnello can be reached by quite a number of “seggiovie” (chair lifts) since both the eastern as well as the western slopes are quite attractive for skiing. Consequently there are quite a number of hiking trails crisscrossing the several ridges of the soubgroup. There are four main ridges, which are listed north to south. 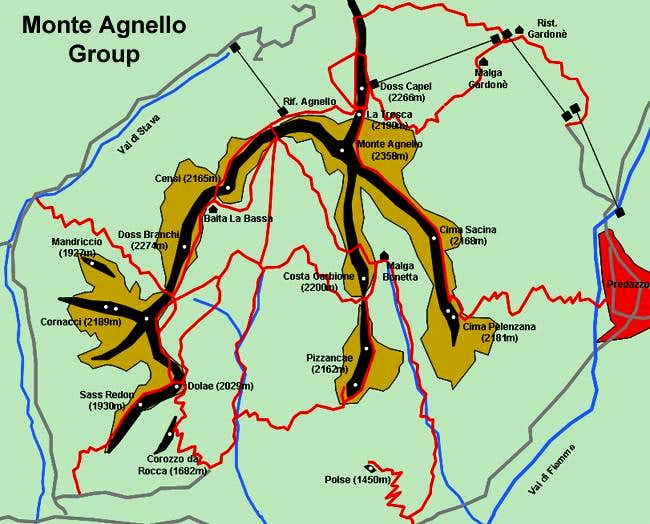 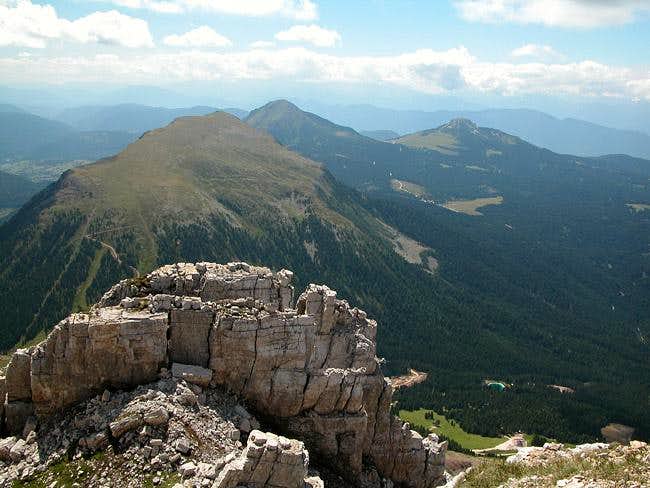 To the west of the Latemar Group but east of the Etsch / Adige Valley there is the mountain range of Eggentaler Berge / Montagni di Val d'Ega (?). Though the Group is not generally considered to belong to the Latemar Group both groups are nevertheless always dicussed in unison. The character of this group is similar to the Monte Agnello group - wide pastures and big forests with a handful of mountians. These mountains are all perfect lookout summits though many have been developed with ski-lifts and -runs. The range is bounded by Eggental / Val d'Ega to the north, the Etsch / Adige Valley to the west, Val di Fiemme to the south and Passo di Pampeago to the east.

From the North
Take the Brenner Motorway A22 south toward the exit Bolzano / Bozen north. Turn onto SS241 direction Vigo di Fassa. Turn off into one of the villages to the east of Karerpass / Passo di Costalunga

From Verona
Take Brenner Motorway A22 to Ora /Auer and get off onto SS48. This road takes you to Val di Fiemme and the towns of Predazzo and Moena.

From Vicenza
Take motorway A31(Vicenza-Valdastico) to the exit Dueville. Go on SS248 della Valsugana (in the direction of Bassano/Trento) then SS47 up to Cismon del Grappa. Here switch to SS50bis (in the direction Feltre/Belluno) up to Fonzaso, from there on SS50 to Primiero, San Martino, Passo Rolle and Moena.

Latemar does not belong to any of the natural parks of the Dolomites. Thus there is no red tape to be found. You might take into account some parking fees at the bottom stations of the chair lifts but that is about all.

As with all Dolomite summits the best time is late May through early October but winter ascents are possible as well. Best time in my opinion is September or early October since apartments are easily to be had and weather often is finest (but cold!). The whole region is equipped with quite a number of ski lifts and is popular for downhill skiing. You might take advantage of the lifts to plan ski tours along the Monte Agnello Ridges.

Depending on the side from which you start your exploration of Latemar you can easily find hotels and apartments at Val di Fassa and Val di Fiemme (east) or Eggental (northwest). Keep in mind that over the summer accommodation is rather hard to find in this area

You can get the necessary info on both sides of Latemar from the following web sites (some only in Italian and German):

There are quite a number of campgrounds on the eastern side of Latemar. The following listing gives you all campgrounds in Val di Fassa and Val di Fiemme though some are located up to 40km away from the group. The nearest ones are near Moena and Predazzo

There is only one official refuge and two bivouacs in the whole Latemar group. They are listed in the following tables

Weather conditions in South Tyrol: www.meteoalpin.com. For the english text you have to scroll down the right frame.

Again I am having trouble naming books in other languages than German. I welcome any helpful addition.

Maps
I have been using the maps by Kompass Verlag: