For hikers and climbers alike the Sella Group is one of the most interesting regions in the Dolomites. It is one of the most visited and best known areas of the whole Alps – access is very easy and there are a lot of hikes and climbs of differing difficulty to be chosen from. Moreover the Sella Group is located rather centrally in the Dolomites with perfect views towards all the surrounding mountain groups and ranges. It “boasts” the easiest 3000er of the Dolomites, Piz Boè, which can be climbed in less than two hours from the cable car station on neighbouring Sass Pordoi. On the more challenging side there are a lot of beautiful climbing summits, like the Sella Towers, Sass Pordoi or Boèseekofel (Piz da Lec de Boè). The Sella group is not as demanding as other Dolomite Groups; there are some very easy reachable places (Sella Türme, Piz Ciavazes, Sass Pordoi). As a result those summits are often very crowded. 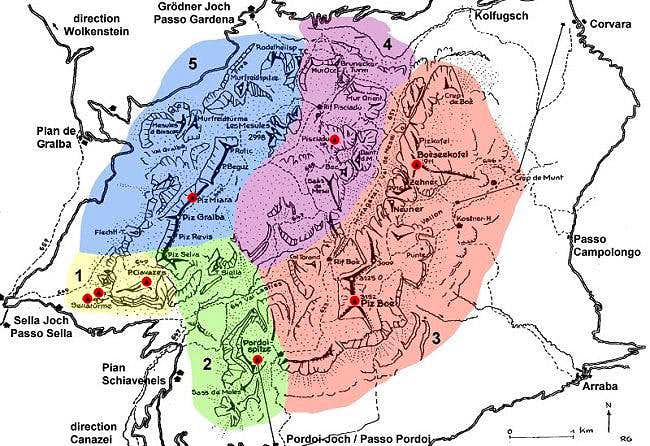 When seen from afar (especially from the west) the Sella Group appears to be a giant inaccessible fortress. Vertical walls abound all around and a t fist glimpse there doesn’s seem to be an easy access. The group is shaped roughly rectangular with the short sides to the north and south. The vertical walls are broken into two storeys, a wide lower one with a narrower upper one placed on top. This results in a giant ledge running all around the huge group, the famous Sella Ringband, as it is called in German. Each outside climbing route first tries to attain this ledge before reaching for the upper faces. The top of the Sella Group is a huge structured summit plateau, a barren moonscape, which at close inspection reveals a large variety of hidden plant life among its cracks.

There are a couple of “weak spots” in this fortress however. From the north-east and south-west two deep cut valleys reach into the range, almost touching at its center. Val Lasties, a broad valley with massive walls on either side, heads up from the south-west into the centre of the group. From the north-east Val di Mesdi, the archetype of a narrow Dolomite valley, heads down to meet it. In addition to these valley you will find additional short and steep access gorges, the most famous of which is Val Setus, also coming up from the northern side, from Passo Gardena / Grödner Joch.

At the sides of the Sella rectangle there are four famous passes (especially among bikers and fans who follow the Giro d’Italia): Sella Joch/Passo Sella (W), Pordoijoch/Passo Pordoi (S), Passo di Campolongo (E) and Grödnerjoch/Passo Gardena (N). For skiers and bikers (and motorcyclists) the tour around the Sella is well known as "Sella ronda"/"Sellarunde". The sides of the rectangle are escorted by the roads to those passes, so approach to the group is always very easy.

Overall there are about 75 primary summits and lots of secondary pinnacles, towers etc. not counted as "real" mountains by themselves. The Sella group can be divided into several subgroups (see the overview map above for details).

To the south-west of the Sella Group you will find this little subgroup (indicated in yellow on the interactive map above). It consists of Piz Ciavazes and the five Sella Towers which are located at the southern tip of the group. All summits are well known climbing destinations, which can easily be reached from Sella Pass by a short half hour hike.

Consequently the area is very crowded, especially the routes on the first and second Sella towers. Piz Ciavazes offers such a variety of routes that the crowds disperse. All routes are located on the southern and western faces and make for good afternoon climbing. 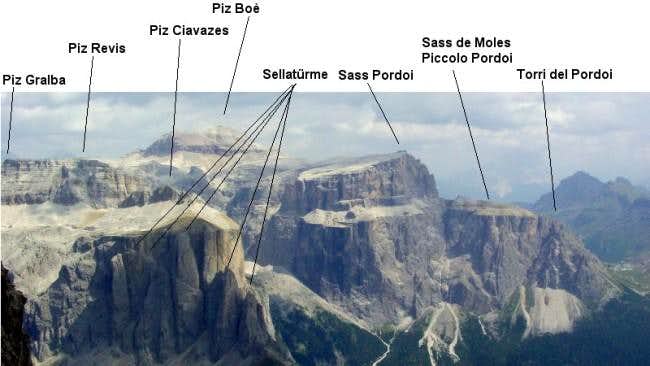 Val Lasties is the broad valley which cuts into the Sella Group from its south-western end. It is lined by very impressive vertical faces the most important of which is Sass Pordoi, the southernmost rampart of the Sella Fortress. Sass Pordoi can be reached by cable-car and is definitely one of the most crowded mountaintops in the whole Alps. From there the whole Sella Group can be explored within a day.

Quite to the contrary the other summits surrounding Val Lasties are rather solitary while the valley itself is one of the main (hiking) traffic routes into the group. Especially the western summits like Piz Selva are visited by two dozen people per day only, most of whom use the difficult Pößnecker Ferrata to reach it. 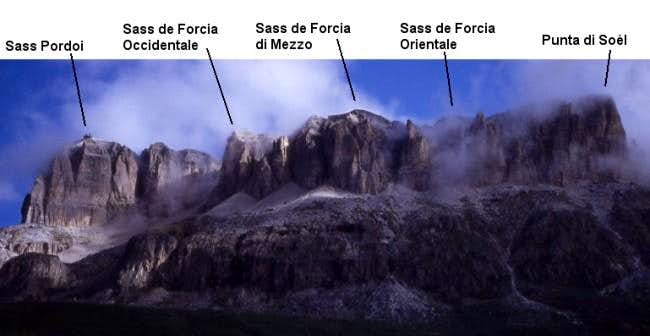 Piz Boè is the highest summit of the Sella Group and "the easiest 3000er in the Dolomites". For climbers this mountain doesn't offer interesting routes but for hikers it offers several (very crowded) routes. There also is a difficult ferrata, Via Ferrata C. Piazzetta, on the south-east face of the mountain. The mountains of the Valbon Area (Sass dals Nü, Sass dals Diesc, Boèseekofel) are somewhat unknown but are offering a very interesting area for both climbers, hikers and ferratisti. 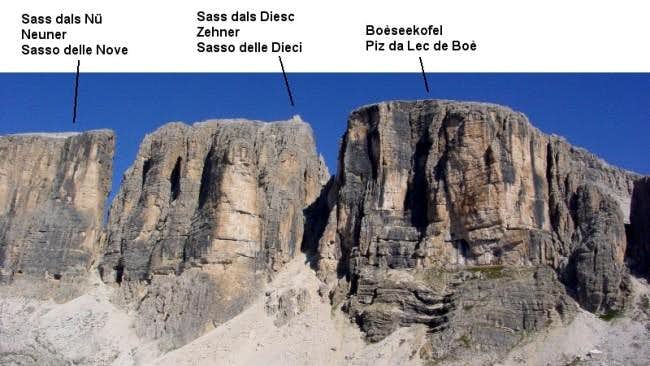 This area is located to the north of the Sella Group and west of the deep cut of Val di Mesdi. It is characterised by its many famous climbs, the Via Ferrata Brigata Tridentina (Pisciadu Klettersteig) and its deep and narrow valleys. The main summit is Cima Pisciadu, which can be reached easily from the Sella Plateau but the main attractions are the spires and towers along Val di Mesdi.

The subgroup can easily be accessed from either Passo Gardena / Grödner Joch or the village of Colfosco / Kolfuschg (located at the mouth of Val di Mesdi) With a 90 minute hike you also can reach the area from the cable car station at Sass Pordoi. 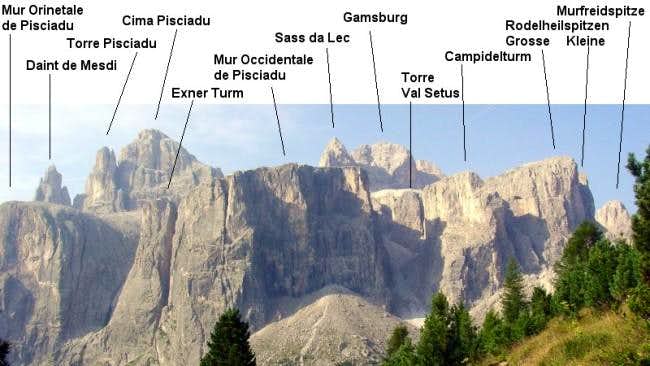 This subgroup consists of the western part of the Sella Fortress. As seen from the top rarely a summit stands out above the Altipiano delle Meisules but seen from the outside this is the part where the character of the Sella Group is best seen. There are two large steps both consisting of vertical walls, several 100m high. There are several very steep valleys, the broadest of which, Val Setus, is the main access route from this side of the group. The west faces of the summits almost all offer a multitude of high quality classic routes and the famous Ferrata delle Meisules / Pößnecker Klettersteig heads up to the southernmost summit, Piz Selva.

Trailhead for the northern part (Torre Val Setus to Murfreidspitze) is Grödnerjoch/Passo Gardena (or somewhere on theroad to the pass). Access point to the Murfreid Area is Plan de Gralba at the road to Sella Joch/Passo Sella. For the southern part (Piz Selva, Piz Miara etc.) best approach is from the road to the Sella Joch/Passo Sella. Also the long traverse of the Altipiano from the Sass Pordoi cable car can be recommended. You'll have to hike once around the whole group however.

Cogui
Great and famous crag at the base of the Piz Ciavazes, fully bolted routes, some artificial holds. Mainly very difficult, overhanging routes, climbable all around the year. About 50 routes from 5b up to 8c (!), mailny 6c and more. The easier routes ar not as good as the more difficult ones. A good place to watch very good climbers.

Palestra dei Bambini
A big bolder at the forest close to Pian Schiavaneis, nice and easy (4, 4+, 5, 5+, 6a, 4), fully bolted routes, good with children and for beginners

Steinerne Stadt/Città dei Sassi
Bolted routes in a beautiful setting close to Sella-Joch/Passo Sella. Big boulders which are somewhat tricky to find if you go there for the first time. Routes from 5 to 7c+ (5.9 to 5.13b)

Approach from S
From the south (Lago di Garda, Trento, ...) take the motorway A22. Leave this at Egna Ora and follow the highway 48 through Val di Fassa to Campitello or Canazei.

Approach from N
From north (Germany, Austria, ...) the usual way to reach the area is motorway A22 from Brennerpaß. Leave the motorway at Chiusa/Val Gardena and follow the road through Grödnertal/Val Gardena to St. Christina and Wolkenstein / Selva. Alternativly one may turn E at Brixen already and follow Pustertal / Val Pusteria up to St. Lorenzen. There Gadertal / Alta Badia turns off south south and leads you to Corvara and Kofuschg / Colfosco.

Approach from W
From the West (Switzerland, Bodensee, ... ) take the road to the Reschenpass / Passo Resia and travel SS38 through the Vinschgau Valley to Meran / Merano. From there a motorway brings you south to Bozen / Bolzano. Here turn off onto SS241 east across Karerpass / Passo di Costalunga into Val di Fassa. At Vigo di Fassa take SS48 north to Canazei. Alternatively take the Brenner motorway north from Bozen / Bolzano until you reach Klausen / Chiusa. Here turn off into Grödnertal / Val Gardena.

Approach from E
From the east (Cortina d'Ampezzo, Sexten Dolomites, ... ) follow SS48 via Passo di Falzarego to Arabba. From Belluno (coming from Venezia or Friuli) you can reach the Pordoi pass using the Canale d'Agordo Valley until you reach Alleghe. A bit further north the road from Falzarego joins and leads you to Passo Pordoi.

No red tape but take care to be early, especially for the Vie Ferrate or the ascents to Piz Boè and Cima Pisciadu. They can be terribly crowded.

Most common is summer, but some of the S-face routes may be possible all over the year. In winter heavy ski tourism of all kinds.

All around the group you can find a number of campgrounds:
Val di Fassa:

The best information on boarding houses and hotels can be found on www.dolomiti.it. The site is not complete – you might find more information on local tourist web sites, but it already offers an impressive list. The following listing gives you an overview for the larger towns and villages surrounding the Marmolada Group.

In addition most of the links posted in the "accommodation section also have weather info and/or webcams.

Books:
There is one very recommendable book, Sella - Langkofel Extrem, which the original submitter kletterwebbi used to help put up this page. It gives an overview over hundreds of climbing routes in the area. Two thirds of the book deal with the Sella Group.