Compared to the neighbouring Sexten and Cortina d’Ampezzo Dolomites the Prags Dolomites / Dolomiti di Braies are probably the least known group of all. This isolated area can be reached by car in only two places, Pragser Wildsee / Lago di Braies and Plätzwiese / Prato Piazza, and these spots can get crowded on fine summer weekends. With the exception of its highest summit Hohe Gaisl / Croda Rossa (3146m, sometimes also counted as belonging to the Ampezzo Dolomites) it lacks summits topping the 3000m line.Moreover Hohe Gaisl is formed by rock so fragile that it is rated as one of the most difficult Dolomite mountains to climb.

Geologically the Prags Dolomites are among the most complex Dolomite groups. The solitary mountains in the east of the group are formed by dolomite rock whereas the northern main ridge is built of limestone like that found in the Dachstein area. The southern parts next to the Fanes Group are also built of limestone but here you find karst formations otherwise typical for the Julian or Kamnik Alps.

The group, together with Peitlerkofel on the other (western) side of Gadertal / Val Badia, is the northernmost outpost of the Dolomites. It forms an irregular quadrangle with its northern side larger than its southern one. The following valleys form its boundaries:
There is only one ferrata in the group – the eastern ridge of Hochalpenkopf. The southeastern part has some very nice (and easy) hiking trails while in the southwestern and northern ridges hiking gets quite difficult. Trails are far from easy and sometimes vanish. You need a good sense for orientation, especially in the almost trail less karst regions of the southwest.

A division of the Prags Dolomites into subgroups is rather difficult because there are only a few clearly defined ridgelines. Many of the mountains are solitary summit blocks so that for the sake of organizing them into a subgroup I rather use the valleys and passes. Please feel free to comment on this subdivision – it can be changed

Each of these groups will be described in a section below. Where a SP-page exists only the single summits are listed, elsewhere a short note on the characteristics will be given. 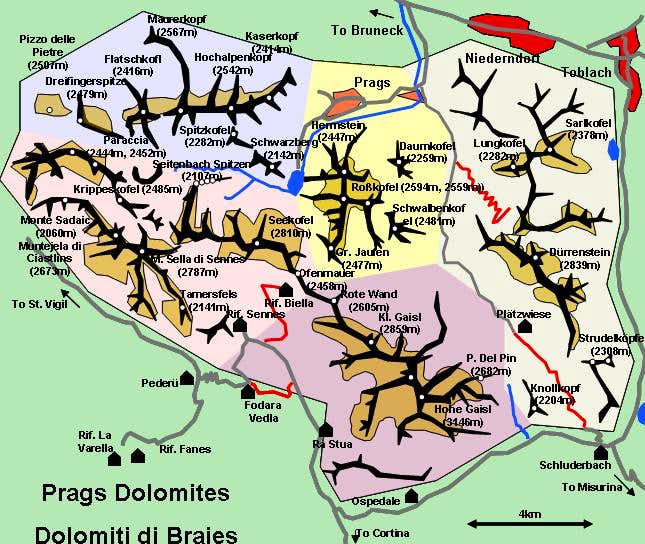 Schematic map of the Prags Dolomites with the five subgroups. See below for their description.

Located between Pustertal / Val Pusteria in the north and Fojedöratal / Val Fossdura and Grünwaldtal / Val di Forestal in the south this subgroup includes summits which show easy ascent routes from the south but steep faces to the north. It contains the only ferrata of the whole group, the northeast ridge of Hochalpenkopf / Cima dei Colli Alti. The summits are listed west to east