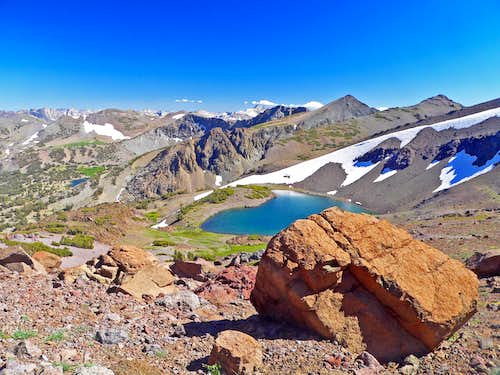 South from pass 10,800, Latopie Lake below
The terrain of the Northern Sierra between Yosemite National Park and Lake Tahoe is generally volcanic in nature. The ancient Sierra was repeatedly covered by lava flows as it rose in height. The peaks are dark and offer little to the rock climber. The higher ones have extensive views and are usually moderate day hikes, walk-ups rarely exceeding class 3. The PCT (Pacific Crest Trail) runs along the crest at Sonora Pass (Hwy. 108). Just south of the pass it skirts 3 small peaks. The 3rd peak south from the pass is a rather shapely peak that is just north above Latopie Lake. Thus I dubbed it "Latopie Peak" It can be done in a few hours from Sonora Pass. All 3 peaks and Leavitt Peak could be done in a day. 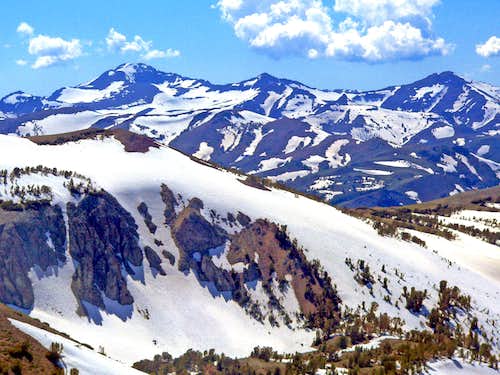 West to the Sierra crest south of Sonora Pass, L-R: Leavitt Peak, "Latopie Peak" and "Pacific Crest Peak" from Mt. Emma, 10,525'
There any combination of approaches from the west. For the sake of simplicity the most direct is to go east from Interstate 99 at Manteca on Hwy 120, 22 miles to Oakdale. Hwy. 120 combines with Hwy. 108 for 26 more miles to a junction were 120 goes right (east) to Yosemite. Continue northeast on 108 through Jamestown then Sonora and on up into the high country approximately 70 more miles to Sonora Pass. From Hwy. 395 on the east side of the range, go west 15 miles to the pass.
Route: Take the PCT south as it climbs to the crest and goes along the west slopes of the first two peaks until it reaches a saddle at 3 miles. The north ridge of "Latopie Peak" is directly ahead. The PCT then drops down to the left and goes along below the northeast face of "Latopie Peak" until it reaches a pass (10,800') at 3.7 miles. Continue on over the pass above Latopie Lake as it goes down to the right for .5 miles and climb up to a small saddle between "Latopie Peak" and Leavitt Peak. Take the southwest ridge to the summit (class 2-3). Of course the north ridge class 2-3 is more direct but gets quite serious near the top. There is a steel cable high along the steep desolate west slope to provide a traverse, kinda like on Half Dome. I would not attempt this baren crumbly slope without the cable. At the end of the traverse you wind up near the top of the southwest ridge. The northeast face looks to be at least class 4 on potentially dubious rock.

Northeast from Leavitt Peak, "Latopie Peak", lower right
Hwy. 108, as it approaches Sonora Pass from east or west gets steep and narrow with hairpin turns. Not recommended for RVs. The peak is on the border of the Emmigrant Wilderness and the Toiyabe National Forest. No permits are required for day hiking.