Kennedy Peak is located in the Emigrant Wilderness Area, which is just north of Yosemite National Park. The dramatic north face towers 3,000' above Kennedy Lake, and it is, I believe, the most scenic peak within the Emigrant.

Kennedy peak consists of red and black volcanic rock and sits at the eastern most conclusion of an alpine cirque that surrounds Soda Canyon. Molo Mountain and Relief Peak wind away to the south and west of the summit.

It's a relatively easy 7-mile hike to the base of the mountain, with great scenary and excellent camping and fishing at the lake. Though not nearly as crowded as Yosemite can be, the lake is one of the more popular destinations in the Emigrant during the summer. However, Soda Canyon sees very little traffic and hardly anyone climbs the peak.

The EWA does not have the dramatic scenary of Yosemite Valley, however it also does not have the crowds that Yosemite has during the summer. The glaciated lanscape is consistent with that found in the backcountry of beautiful northern Yosemite. The northeastern third of the Wilderness is dominated by volcanic ridges and peaks; the remaining areas consist of many sparsely vegetated, granitic ridges interspersed with numerous lakes and meadows. There are over 100 lakes and 22 named peaks within the EWA. Elevations range from below 5000 feet near Cherry Reservoir to 11,570 feet at Leavitt Peak, but the elevation range of most of the popular high use areas is 7500 to 9000 feet. Precipitation averages 50 inches annually, 80 percent of it in the form of snow. Snowpacks typically linger into June, sometimes later following very wet winters. Summers are generally dry and mild, but afternoon thundershowers occur periodically and nighttime temperatures could dip below freezing anytime.

Kennedy Meadows also operates a pack (horse) station. They will let you park overnight for free (and shower for free upon return) if you pack in with them one-way. They also have rental cabins, a supply store, small restaurant and saloon.

Free wilderness permits are required for overnight stays in the Emigrant Wilderness Area. Call the Summit ranger station at (209) 965-3434 near Pinecrest ahead of time and they will prepare a permit for you in advance.

The climbing season varys each year depending on how much snow the area receives during the winter months. Hwy 108 closes during the winter, making winter access more difficult. So typically the most popular time to climb the mountain is from June through October.

There are plenty of places to camp at Kennedy Lake or in Soda Canyon. The best camp sites are located 1/4 mile west of Kennedy Lake. There are a couple of large horse camps on the south side of Kennedy Creek. There is also a camp site on a rocky knoll in the NE corner of the lake. 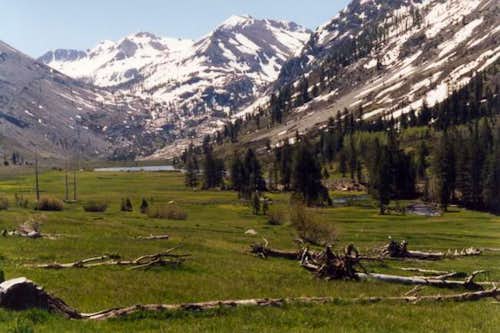 As an added bonus, Kennedy Lake offers exceptional fishing for German Brown Trout up to 18". The trout were planted in the late 1800's and are naturally self sustaining now. Bring an ultra-lightweight spinning rod and a handful of Panther Martin spinners and you are sure to eat well. Possession limit is 5. Note that a CA fishing license is required.

"All these features are apparently named for two brothers. Andrew L. Kennedy patented a strip of land encompassing Kennedy Lake in 1886. (Gudde, Place Names, 163.) In 1896, Lincoln Hutchinson noted that J.F. Kennedy of Knight's Ferry claimed two or three thousand acres of land in the vicinity of the creek, meadow and lake. (SCB 2, no. 5, Jan. 1899: 280.)

The 1883 GLO plat and surveyor's field notes identify "Kennedy's Lower Camp" in sec. 2 and "Kennedy's Meadow West" in sec. 2 and 11, T.5 N., R 20 E. The lake is also named, as is "Kennedy Bros Upper Camp," at the lake. Hutchinson referred to the low divide between the head of Kennedy Creek and Kennedy Canyon as "Kennedy Pass," but the name has never been on USGS maps. (Canyon, TNF; others, StNF)"
- Peter Browning, Place Names of the Sierra Neveda