Wells Peak is about 5.5 miles northeast of Sonora Pass, slightly east of the main crest of the northern Sierra Nevada.  There is also a slightly higher (11,118 feet) Wells Peak to the south, near the northern boundary of Yosemite National Park.  This page concerns the 10,833-foot mountain that is in the Toiyabe National Forest, inside the grounds of the Marine Corps Mountain Warfare Training Center (MCMWTC).

Per an agreement with the U.S. Forest Service, the MCMWTC occupies and is permitted to conduct training on 46,000 acres of the Toiyabe National Forest.  The land remains under Forest Service management, but the Marines may use the area to train for mountain and cold weather operations.  The main installation at Pickel (not "Pickle") Meadow stands at 6,762 feet.  This region is generally rugged, but the local peaks are not especially high; the tallest among them are barely over 11,000 feet. 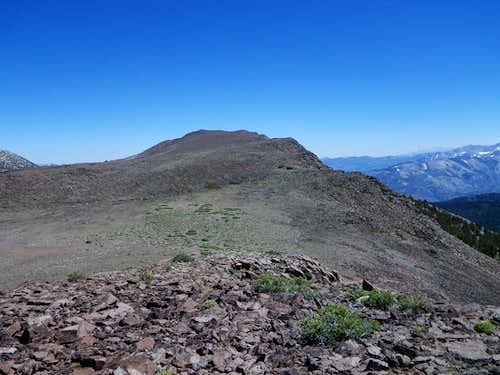 The broad summit of Wells Peak 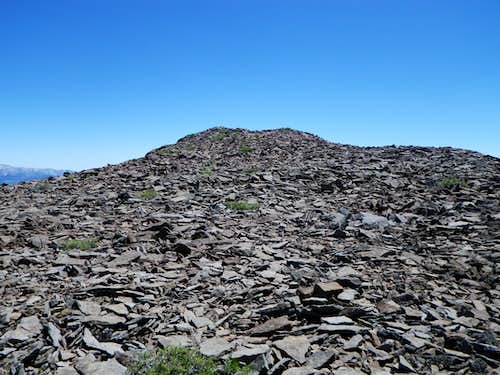 Ubiquitous talus on Wells Peak.
Wells Peak can easily be climbed in a fraction of a day.  One can also combine it with other nearby mountains, such as White Mountain to the southwest or Lost Cannon Peak to the northeast.  It is not an exciting climb, but it does offer nice views, especially to the west.  The broad, talus-strewn summit of Wells Peak provides views north to Fish Valley, south to the Walker River Valley, northeast toward Lost Cannon Peak, and west to the eastern slopes of the main Sierra crest.  Two routes to the summit are described below, but this easy peak is Class 2 from any direction.

The area in question is on the USGS Lost Cannon Peak Quadrangle.

From Sonora Pass, take Highway 108 east about ten miles. Turn left (north) into the MCMWTC.  If coming from Bridgeport, take Highway 395 north, then Highway 108 west.  The MCMWTC is about 21miles from Bridgeport, on the north side of 108, 4.1 miles from the junction with Highway 395.  Use the second (farther west) entrance to the MCMWTC if coming from the east.
After you have entered the MCMWTC, set your odometer to zero and continue straight on the dirt road that climbs north.  At 1.6 miles, go left.  At 3.0 miles go right, passing a junction where there is an arrow pointing to the left. At 3.7 miles, go left and follow this road 1.4 miles to where it ends at Silver Creek Meadows (about 8,600 feet). A dirt road loop near the trailhead provides a convenient parking spot near a "Wilderness Information" sign. Any vehicle can reach this destination. Initially, one heads southwest from here across a grassy meadow and past an old log cabin.


Silver Creek:
One way to approach Wells Peak is simply to follow Silver Creek upstream to a saddle (generally heading northwest), and then to hike generally east from this saddle to the summit.  An intermittent trail can be found, but cross-country travel here is not difficult.  Just use the trail where you can find it, hiking parallel to the stream on its right (north) side.  A few sections are boggy; caution is warranted in these stretches to avoid deep muck. After following Silver Creek upstream this way, continue northwest up a sandy slope to the saddle that sits between the main Sierra crest and Wells Peak.  From the saddle one can choose to take a more or less direct approach that involves traversing expansive talus fields and passing a false summit on its right, or one can hike northeast first until the ridge plateau has been gained, and then proceed southeast toward the summit on easier terrain, passing the false summit on its left.  The summit of Wells Peak is an enormous field of reddish talus.  The saddle is about 3.5 miles from the trailhead.  There is a "Carson-Iceberg Wilderness" sign at this pass.  The summit is about 1.5 miles from this pass, making the one-way distance of this route about five miles with a gain of about 2,200 feet.

For a pleasant and more direct cross-country descent, don't return the same way.  Instead, head from the summit to the first canyon to the east.  Descend southeast and then south on easy terrain till you recognize the sage-covered slopes above the trail head. 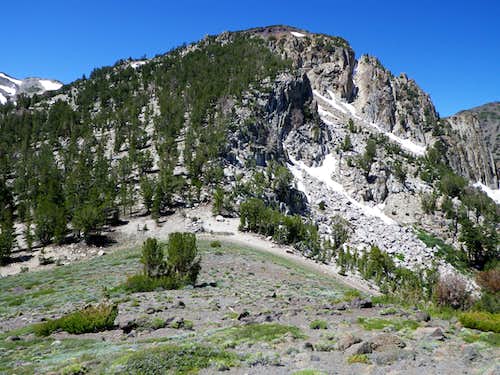 Saddle on the way to Wells Peak 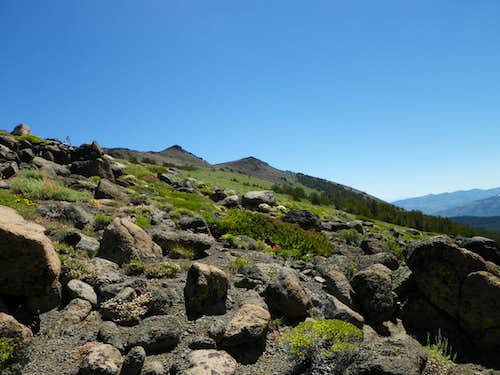 Looking at a false summit (left) and the true summit (right). 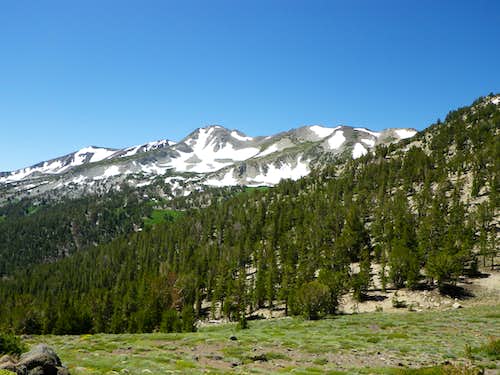 White Mountain from the slopes of Wells Peak.
Southeast ridge:
A more direct route is to begin at the Silver Creek trailhead, but very soon to head cross-country generally north and eventually west up the steep hillside.  The slopes are moderately brushy at first, then pleasantly forested.  Ultimately, the forest yields to broad talus slopes, as the summit of Wells Peak is an immense sea of reddish talus.  Eventually the peak will come into view as a large bump to the left (west). This route is much shorter (albeit steeper), only about two miles one-way. 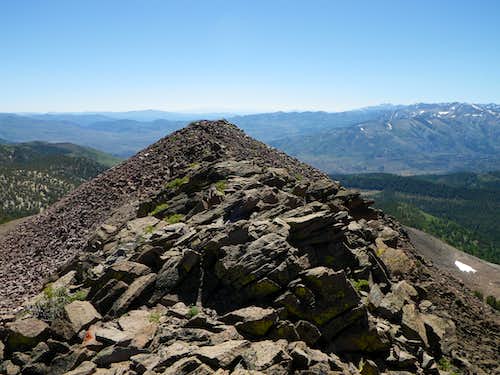 Looking southeast from the summit.

No permit is required to climb Wells Peak.  Be advised, however, that the mountain lies within the grounds of the MCMWTC.  Do not be surprised to encounter Marines engaged in exercises, often very realistic combat scenarios involving actors playing enemy combatants.  PLEASE DON'T FEED THE SOLDIERS. 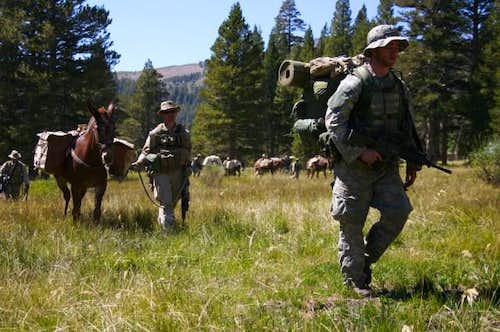 Marines Training, with Wells Peak in the Background
Photo by Combat Camera

Wells Peak can be climbed year round, but Highway 108, alas, is not open year round.


The Sonora Bridge Campground is just east of the MCMWTC on the south side of Highway 108, two miles west of the junction with Highway 395.  Developed Forest Service campgrounds farther west on 108 in this vicinity include Deadman, Upper/Lower Baker, and Leavitt Meadow.

The nearest town is Bridgeport, California, about 25 miles away.  (From the MCMWTC, take Highway 108 east and then Highway 395 south.)  Although very small, the town has numerous lodging and dining options.

Additional considerations for Wells Peak that applies equally to Lost Cannon/Fish Valley Peaks: The cell phone reception around the MCMWTC seems to be very good. A cell phone that had the MTV of cell providers (Virgin Wireless) got almost full bars near the MCMWTC. Final note, if you find any old, abandoned live ammunition lying around on the upper elevations of this hike (read: rifle/machine gun ammo), my recommendation is to either leave it where you found it or pack it out and dispose of it yourself. Turning it in to the MCMWTC can be a hassle. That is, in this post-September 11th world, the Marine MPs will want to know EVERYTHING about you.

As always, you provide good information. Thanks.

Oops! Thanks. I fixed it.