SummitPost has six different pages for mountains with the word "cannon" in their names, but Lost Cannon Peak happens to be the highest of them all.  (See Jesus Malverde's historical reference below on how the peak acquired its name.)

Lost Cannon Peak is east of the main crest of the northern Sierra Nevada, between Sonora Pass and Bridgeport, California.  The mountain stands within the Humboldt-Toiyabe National Forest, and is also inside the grounds of the Marine Corps Mountain Warfare Training Center (MCMWTC).  Per an agreement with the U.S. Forest Service, the MCMWTC occupies and is permitted to conduct training on 46,000 acres of the Humboldt-Toiyabe National Forest.  The land remains under Forest Service management, but the Marines may use the area to train for mountain and cold weather operations.  The Marines have conducted training here in partnership with the Forest Service for over 60 years.  This region is generally rugged, but the local peaks are not especially high by Sierra standards; the tallest among them are barely over 11,000 feet.  The main installation at Pickel (not "Pickle") Meadow stands at an elevation of 6,762 feet.

Following a short Class 2 hike up through sand and scrub, Lost Cannon Peak ultimately offers a fun Class 3-4 summit block with some exposure. The prolific peak-bagger Bob Burd has called it "the best scramble in the area."  The peak can easily be climbed in a fraction of a day, so one has ample time to explore different climbing routes to the top of the block, once one has arrived at the broad and sandy summit plateau. One can also combine it with other nearby peaks, such as Wells Peak and Fish Valley Peak. 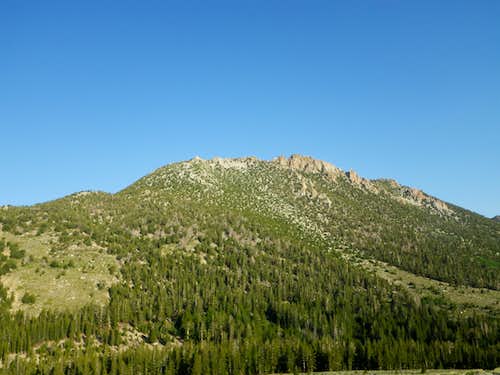 Lost Cannon Peak from the Southeast 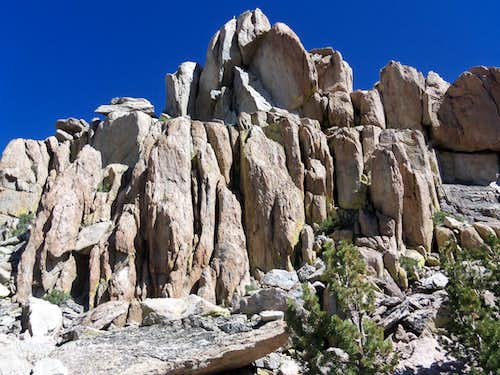 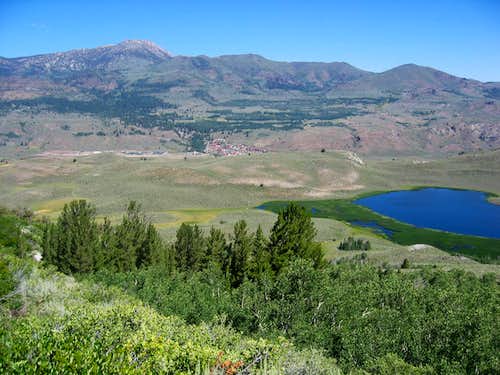 The area in question is on the U.S. Geological Survey's Lost Cannon Peak Quadrangle.  The MCMWTC is 21 miles north of Bridgeport, California, and 22 miles south of Coleville, California, on Highway 108 in Pickel Meadow.

From Sonora Pass, take Highway 108 east about ten miles. Turn left (north) into the MCMWTC.  If coming from Bridgeport, take Highway 395 north 17 miles, then Highway 108 west about four miles.  The MCMWTC is about 21 miles from Bridgeport, on the right (north) side of 108.  You will be accosted by a guard when you enter the MCMWTC, but on my last occasion to climb Lost Cannon Peak, I simply told the guard I was going hiking, and he responded with a smile, "Be safe!"

The following describes an approach to Lost Cannon Peak from the area known as "Woody."  The wooden "Woody" sign has faded, but these directions will get you there: 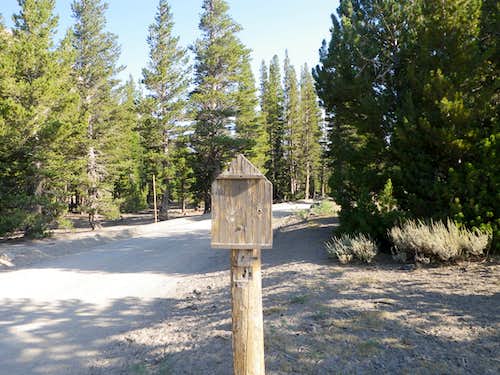 
Once you have entered the MCMWTC, look straight ahead for a dirt road that heads north from the lower part of the base.  Take this road. 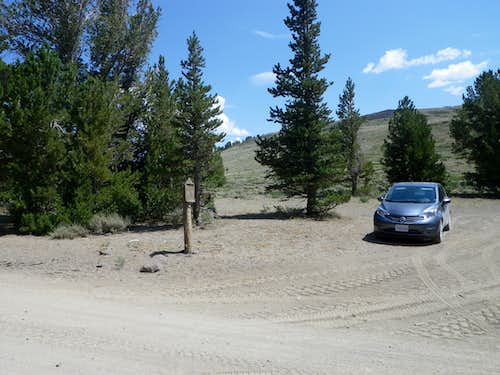 This page describes the shortest approach to the peak.

There is no trail to Lost Cannon Peak, but you should be able to see its rocky summit to the northwest from where you are parked (if you have followed the directions given above).  Simply hike more or less west and up through sand and scrub to gain the ridge, then scramble more or less north to find the Class 3 summit block.  You will probably want to circle around somewhat and begin your approach to the summit block from the west, to avoid false summits and brush.  A metal rod marked the highest of the rocky towers that crown the sandy summit plateau when I was there. This route is about 1.5 miles one-way and involves about 1,900 feet of elevation gain. The summit block itself is about 75 feet high and is somewhat challenging.  SP's own Bob Burd has said of Lost Cannon Peak's summit block, "This little gem was the best Class 3 summit I've seen in the Sierra between Sonora Pass and Donner Pass." 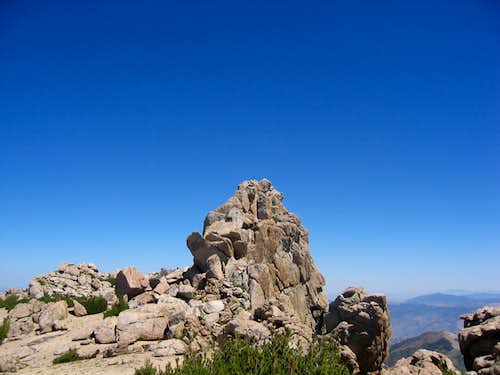 Approaching the Summit Block from the South 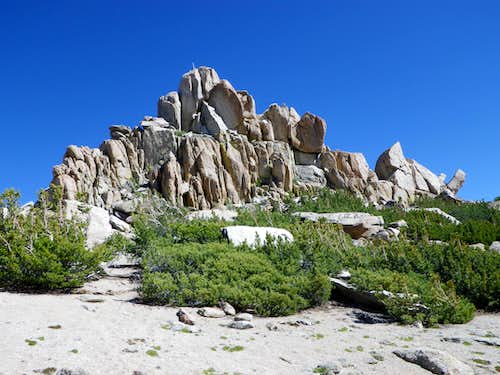 Approaching the Summit Block from the West

No permit is required to climb Lost Cannon Peak.  Be advised, however, that the mountain lies within the training grounds of the MCMWTC.  Do not be surprised to encounter Marines engaged in exercises, often very realistic combat scenarios involving actors playing enemy combatants.

The Sonora Bridge Campground is just east of the MCMWTC on the south side of Highway 108, two miles west of the junction with Highway 395.  Developed Forest Service campgrounds farther west on 108 in this vicinity include Deadman, Upper/Lower Baker, and Leavitt Meadow.

The nearest town to the MCMWTC is Bridgeport, about 21 miles away.  (From the MCMWTC, take Highway 108 east and then Highway 395 south.)  Although very small, the town has numerous lodging and dining options.  Note: Gasoline tends to be very expensive in Bridgeport.

Information on how the peak got its name

Here is interesting information on John C. Fremont's Lost Cannon from which Lost Cannon Peak is named: http://www.longcamp.com/how.html Pete Yamagata's driving directions are still accurate for the most part. Here's some updated info that includes new sign changes: Drive through the Marine Corps Mountain Warfare Training Center (MCMWTC) continuing straight on the dirt road. At mile 1.6 take a left (this road is signed 32059) At mile 3.0 take a right (a sign says "One Way" with arrow pointing to left - you go RIGHT continuing on road 32059) at mile 3.7 take a right (do not take the signed road 32059A) at mile 5.1 take a left at mile 5.2 you have reached the sign board/flat area/ aka "Woody" GPS: N 38.39591 W 119.5371 Also, if you are considering a link up with Fish Valley Peak (10,571') to the north here are some approximate times going at a moderate pace for a snow-free, mid-July hike. Starting point is "Woody" From Woody to Lost Cannon Peak both summits climbed: 2 hrs Lost Cannon Peak to Fish Valley Peak: 2 hrs Fish Valley Peak back to Woody: 2.5 hrs Also, there was no running water/snow pack on this route mid-July 2012. With hot temps I drank almost 4 liters on this hike. Plan accordingly. Fish Valley Peak sees very few ascents apparently. There were only roughly 28 entries in the summit register that went back to 1994. The cell phone reception around the MCMWTC seems to be very good. A cell phone that had the MTV of cell providers (Virgin Wireless) got almost full bars near the MCMWTC. Final note, if you find any old, abandoned live ammunition lying around on the upper elevations of this hike (read: rifle/machine gun ammo), my recommendation is to either leave it where you found it or pack it out and dispose of it yourself. Turning it in to the MCMWTC can be a hassle.