Lyon Peak is in the northern Pine Nut mountains southeast of Dayton, NV.
It is most often accessed via Old Como road - a popular 4wd route leading to the the Ghost Town of Como, NV.

Rawe Peak can also be reached from the Como Saddle and the two can be combined for a full day of peakbagging.

Another access point is via Sunrise Pass Road, although it is more of a pain to reach a starting point.

Old Como Road (aka the Como Ghost Town trail) leads south from Dayton, NV before reaching the Como Saddle. High clearance 4wd is definitely recommended and the road will likely be impassable during rainy/snowy conditions.

Take Hwy 50 to Dayton Valley Road map.
From the intersection travel 1 mile to a right turn onto Old Como Road. Follow Old Como Road past the schools. After about a mile the pavement ends near some public land signage and a turnout that is used as a 4wd staging area. From the pavement end it is 10.5 slow rocky miles to the saddle.

For Sunrise Pass, take Johnson Lane until it turns to dirt and continue to Sunrise Pass.  After 13 miles from the end of pavement, take a right, and go three miles and park at about 39.0969, -119.4885.  From here, it is a three mile bushwhack, although there are other options along this dirt road.

From the Como Saddle, head due south following old mining and power line roads where available. There is a road directly south of Como Saddle.  Take that for about 0.6 miles, then turn and you will find what appears to be an old road through open forest.  After a half a mile, head south and follow the ridgeline south to the summit.  There is manzanita that will be encountered.  You can avoid the worst of it, by staying generally to the right on the way up to the ridge.  Higher up, if you stay to the right once there is more open land, you will have a clear path to North Lyon Peak 8,651' and Lyon Peak.

The total distance one way to Lyon Peak is approximately 4 miles.  You have to go up and over North Lyon Peak, so the elevation gain is 2,000'.  You will gain another 350' or so on return.

Continue past Como Saddle downhill to a branch with a road leading south towards Stone Spring. This southern road gradually deteriorates, so pick an arbitrary point to park and start out on foot.

From Stone Spring (or the highpoint of the road before dipping down to the spring) head upridge angling just to the south of point 8451 on the topo. Just as you reach the mahogany you should find a good use/ranch trail leading through the dense brush up to the summit ridge. From there follow the ridgeline to the summit.

[Note: I've followed this use trail north, but found that it dissipated into nothing after about a half mile. If anyone has successfully found a connector between this trail and the mining/powerline roads to the north, let me know- I've tried from both ends and came up empty] 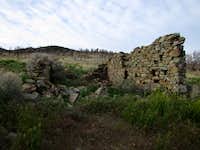 All that is left of Como, NV

The ghost town of Como, NV dates back the 1860's Pine Nut Mountain gold rush.
There is very little left of the town (mostly just a single roadside foundation) though old mines dot the surrounding countryside.

There is no red tape to hike Lyon Peak.  This area is managed by the BLM Carson City Field Office:
https://www.blm.gov/office/carson-city-district-office