Oreana Peak is the third highest mountain in the Pine Nut Mountains. It is located approximately 25 miles southeast of Carson City in Douglas County, adjacent to the two highest mountains in the Pine Nuts, Galena Peak 9416' and Mount Siegel 9451'. Those summits are located just to the northwest of Oreana Peak, and can easily be combined in a day hike to Oreana.

Although Oreana Peak is a prominent summit not far from population centers in Northern Nevada, it is not climbed very often. That is because most people living in this area choose to hike the Sierras, and there aren’t any trailheads up to the Pine Nut mountains, or major trails. Jeep trails head head up the slope to the lofty summits, but require 4WD. Another issue is that primary access to Oreana Peak is from the east side of the range in Wellington, Nevada, and not from the west side where people actually live (Carson City, Minden, Gardnerville).

Still, Oreana Peak is a worthwhile destination. Summit views on a clear day can reach over 100 miles, with views of the Sierras to the west and numerous Nevada desert peaks to the east.

It is best to hike Oreana Peak in springtime (April-May) or late fall (October through early December). Getting there is difficult in the rainy season during the spring and the ridges can be intensely windy, so be mindful of weather forecasts before embarking on a trip here. It is often too hot and too dry to hike here during the summer.

From Reno, Nevada, follow 395 South through Gardnerville. If approaching from the west, take Pine Nut Road, accessible at the south end of the town. Once the road hits about 5700 feet, lesser dirt roads follow the rest of the way up the north side of the peak, and a 4WD is required.  6 1/2 miles from up Pine Nut Road, take a left fork that leads up a canyon to the side of Galena and Siegel. The west approach is longer on dirt roads, although has less hazards than the eastern approach described below.  But approaching this way does require a good 4WD able to handle more primitive roads if wanting to get anywhere close to Oreana Peak.

From the east, access is more straightforward, and the route shorter, but it is complicated. The Red Canyon Road leaves from the pavement and heads directly towards Oreana Peak. Once at an adequate parking area, the summit of Oreana Peak can be reached by hiking a little over 3 1/2 miles of mostly jeep trail. If approaching from the east continue about 16 miles south of Gardnerville on US 395 to Nevada State Route 208E. Follow Route 208E to the east for about 9.5 miles to Upper Colony Road. Follow that north for 4.4 miles to Pinon Drive on the left. After 0.8 miles turn left at Day Lane, and then take the first right onto Red Canyon Road. Follow it for about 4 miles and park at a turnabout at about 6500 feet. There are no other good parking areas further up. 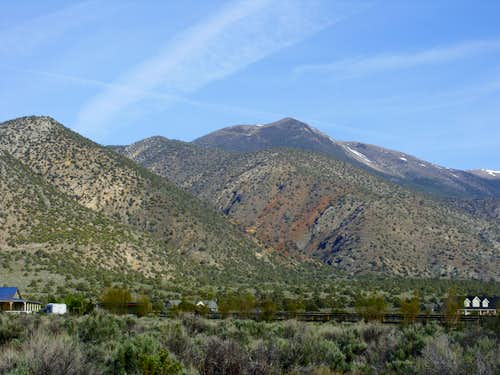 Oreana Peak and the Red Canyon from Wellington, Nevada

Road ratings
Although the road is smooth initially, it gets pretty rough after the first mile. A high clearance, 4WD is highly recommended. In terms of ratings, the road ranges between a 1 rating and a 4 rating (See Scott Surgent's page regarding the road rating system). In general, the road starts as a 1 rating, then becomes a 2 rating, then hits a 3 and 4 rating after the first mile. The road is also very narrow; only enough for one 4WD vehicle. So, if you encounter another 4WD, you may have some trouble. There are very few places to move over to the side. Further, if driving with a nice new SUV, you may want to avoid getting it scratched up. ATVs are an even better option. 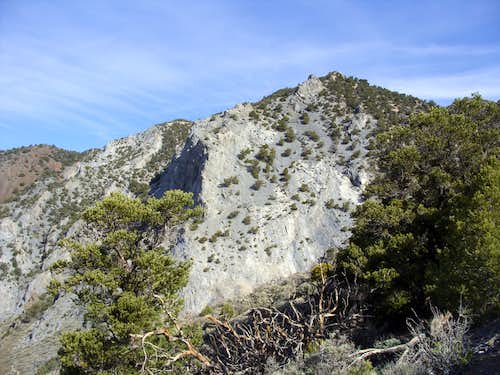 This route is about 3 1/2 miles one-way from the parking area at Red Canyon Road, with an elevation gain of about 2850 feet. It is a lung-busting, calf-busting hike up a steep road. From the summit of Oreana Peak, Galena Peak and Mount Siegel can both be reached by adding another 4 miles round trip.  If not able to get up Red Canyon Road, add up to 8 miles round trip. 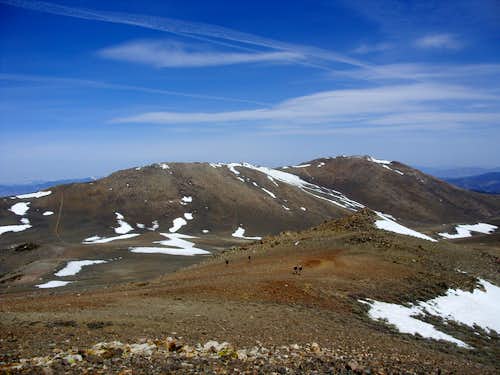 There is no red tape to hike Oreana Peak from either side. Just watch for signs of private land or private roads if approaching from the west side. On the east side, stay off the south side of the road, which is in a Wilderness Study Area under management by the Bureau of Land Management.