What it is, and what it isn't

Smack dab in the middle of San Diego. Not where you would expect to find climbing, but it's here. To find it, start in Mission Valley at the Mission de Alcala, the original mission built in 1769. Take Mission Gorge Road to Mission Trails Regional park.

The climbing area is a small part of the 5900 acre Mission Trails Park. There are lots of hiking and biking trails in this very large park.

The approach to the climbing area is on the aptly named climbers loop trail. You park on the paved road about a 1/4 mile below the climbing area. The approach is steep switch backs, just enough of a hike to get you warmed up. The entire climbers loop trail is about a mile long and both ends are at the paved road. The road through the gorge is gated on both ends and they close the gate every night, but if you want to climb before 8:00a or after 5:30p, just park on the road outside the gate, it adds an easy 1/2 mile on a paved road to the approach.

If you are from out of town, here are the official Directions to the visitor center, find the visitor center, look around, up on the side of the hills, there are obvious rocks, listen for voices, saying things like "off belay", go toward the voices.

OK, at this point, I have to add this very odd experience. I was climbing, really pumped out, climbing at the top of my ability, pushing my grade, working up thin little edges, on a 5.3, top roping, I made it to the top of the route, I was shaking but exhilarated, and then, just then as I topped out, just like in the movies, a chorus of angelic voices raised up to the heavens. No really, honestly, they did, there was a church group meeting at the visitor center on a Sunday morning and the chorus struck up as I finished the route.

What can I climb?

I'm glad you asked. This is the view of the climbing area as you hike up the North end of the loop toward the Main Wall area.


The photo above shows just the Main Wall area, one of three adjacent climbing areas. Chris Hubbard lists over 100 routes in his free Mission Gorge climbing guide. The route numbering above matches his guide. Buy his San Diego county climbing guide and keep this guy off the street and cranking out climbing beta.

So you haven't downloaded the guides and you ask, "What can I climb?". I'm glad you asked. There are routes from 5.0 to 5.12b. Lots of bolted sport routes, lots of mixed (partly bolted, partly trad lead) routes. Some trad routes. All this if free, no gym membership, free free free. 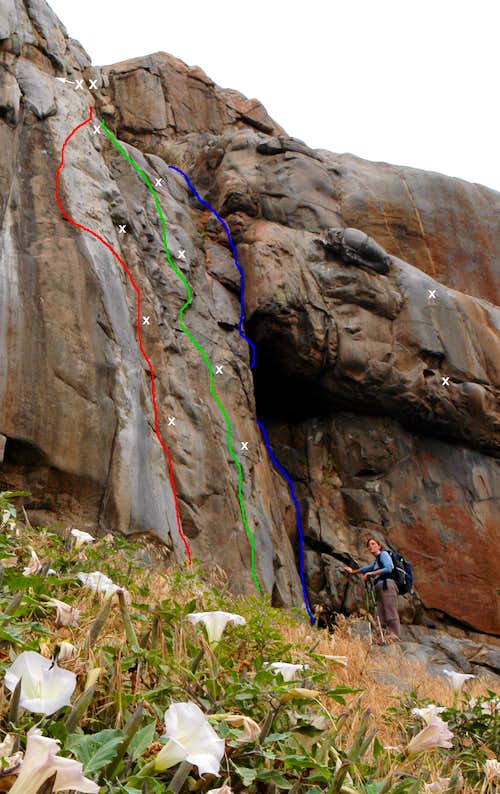 SECRET: Show up before 8:00am, the gate is still closed, park in the parking area outside the gate and walk an extra 1/2 mile down the paved road to the trail head. The place will be all yours. Think of it, a huge outdoor climbing gym all to yourself, the fresh air, the birds singing, the river babbling, and did I mention, free. I have climbed at this place dozens or even hundreds of times on weekday mornings, and my partner and I were the only ones there.

If you are the type that doesn't like solitude, skip the early morning stuff, show up at 11:00a on a spring weekend go to the lunch rock area and climb alongside a dozen other parties. Dogs, outdoor classes, Meet-up groups, obnoxious noob leaders with extra loud voices proclaiming every move they make, everything you could want to find at a local crag.

For cold winter mornings climb at the top of the South end of the climbers loop trail at the Middle Earth area, the sun get on that area first and you can climb in the sun all day.

For being in the middle of a city the area is actually amazing. Early in the morning while it is quiet you can hear the river flowing and birds singing. If you are focused on your route it is easy to slip into the feeling of being on a remote mountain.

The area is amazing but routes are short. Some people snear at the climbing. It is not spectacular in any way, except the fact that it's free and in the middle of San Diego. That actually counts for a great deal. If you are nearby and have two hours you can actually get an hour of climbing in. How about starting early, getting in three hours of climbing and being home by 10:30a before anyone notices you were gone. What's that worth, to me, that makes this place golden.

Some people call the rock greasy. The rock is metamorphised granite. That's my opinion, I have never asked a geologist. My opinion is that the granite on Mission Gorge was perfect, it was golden Sierra granite, the stuff of legends, but then due to an odd fluke of continental drift, it was taken back down into the bowels for a second dunk. The granite started melting and smeared the crystals around a little. It got harder, smoother, slicker.

What I know for sure, it's granite, and it's slick, not everywhere, but lots of the rock is hard and slick, very fine grained. There are some orange faces of very textured rock that reminds me of Jtree, nice face climbing. But sometimes you feel like no matter how much chalk you use it still feels wet.

There are a very few boulder problems but this is not where the boulderers go.

If you want to toprope you could show up with just your harness and an old rope. Nearly every route has a backside walkup, and most have rap rings at the top. Throw in 8 quick draws and you can lead the majority of the climbs. If you want to practice placing gear, bring your rack and you can use a few pieces on many routes. Bring your old rope though, this place is very well used and there is lots of dirt at the base, so you will end up with a dirty rope if you climb here. If your have a rope that is so old that you have cut ten meters off each end, put that forty meter rope to work here, it will be perfect for toproping most of the routes.

People have been climbing here a long time. So some of the consensus grades are old school grades. But mostly the grade of a route is given for regulars, who work the route many times. Some of these grades are accurate only when you have climbed them enough time that you have the sequences memorized. If you don't see the hidden jug, then it can be much tougher. So take the grades with a grain of salt. There are two excellent, downloadable, free pdf guides. Both guides are in agreement on the names and grades, I am sticking to those consensus grades that have been arrived at over lots of time and climbs, and the numbering from this guide that is a map and list with no route descriptions. The second guide has photos, brief route descriptions, and more routes included. The second one with photos can make it easier to find a route you are looking for.

San Diego was originally part of Spain, a Spanish friar named Father Junipero Serra, built the first church in California, Mission San Diego de Alcala just downstream from Mission Gorge. He did that because the narrow gorge allowed him to build a dam and a flume to supply water to the mission. The dam and bits of the flume are still here. While you are climbing you will be right above the not so famous San Diego river, it is very cool to listen to while climbing, but don't swim in it.
People have been climbing Mission Gorge since at least the 60's and probably before. There are not lots of climbs that lend themselves to piton placements, so it was never that popular for the piton placing trad climbers in the day. You can still see the piton scars on the routes that were being used then. The hard rock tended to flake off when the pitons were driven in so you can still see what they were working on.