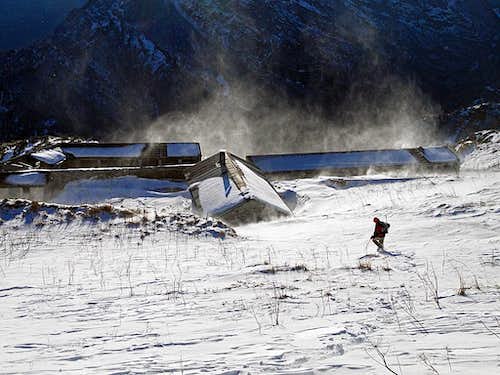 On the southern slopes of Monte Rest 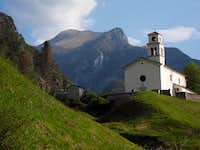 In the wild and rugged group of Carnic Pre-Alps there are not many easily reachable mountains. It is not that they are all technically hard, but the remoteness of that area often raises difficulties, especially out of summer season. But Monte Rest is one of such easy mountains. And even more. It is rising in the main chain and just above a road pass - east of Passo di Monte Rest! In summer, one can reach its top in less than 2 hours, gaining a reward in a form of very nice and broad panorama. It is much less frequented in winter. We reached its top in December, one very beautiful Sunday, and we were all alone, even if in the morning or previous day some had reached the top on skis.

Yes, Monte Rest is also appropriate for skiing. The summit slope is just ideal. You can choose the direct south slope, keep more towards the south-western slope or stick to the south-southeastern ridge to choose on which side of it snow is better. From the huts of Casera di Monte Rest down to the road pass, then you ski by a mountain road. No other passage is possible. That road is narrow and if snow conditions are poor, skiing is not the most pleasant one. Of course, ski tours are usually done when the road pass is still accessible with car. Most of winter and far into spring it is closed which then means a much longer tour.

These remarks hold true of course only for the shortest and most popular ascent route - from the road pass. But if someone wants to enjoy a bit of pure Carnic solitude, the two ascents over ex Forchia alpine pasture can be chosen. They are also considerably longer.

For mountain biking Monte Rest is perhaps less attractive, but for those who really want to ride all roads, no matter how devastated they are, also the tour from road pass to Casera di Monte Rest is doable.

The last attraction of the mountain lies in its west walls. The climbing routes are quite quickly reached from the main road (a few turns below the saddle, on the southern side). The majority of routes are from 80 m to 200 m high.

Geologically, Monte Rest is built of crystalline dolomites from the Triassic period.

As so far I can not write much on this page about routes (the normal route is simple), allow me to post some more pictures of the great Monte Rest panorama. As said, on Saturday weather cleared and Sunday, December 1st, 2013 was wonderful. From the summit the view is a bit obscured only towards the southeast. But there the high and quite wild Monte Valcalda is rising. We can have a look on just all details of its west face (where also the ascent on top goes). On the south, the long Val Tramontina lies below us. And right of it, towards the southwest and west lies a wild mountaingroup in which so many sharp and extremely rarely ascended peaks are rising. Carnic Pre-Alps south of the upper Tagliamento valley. You can't recognise and name all those peaks. After the first wild summits above the road pass high mountains start with Monte Frascola and then the range goes far towards the west. In the distance we recognise Monte Pramaggiore, right of it Monfalconi group and other sharp summits above the sources of Tagliamento. On the northwest, the most impressive and closest are Monte Tinisa and Monte Bivera group. But just because they are the closest. Right behind one can see the whole range of mountains above Val Pesarina, then towards the north the highest summits of the Carnic Main Range (Monte Coglians and neighbours) and towards the northeast the eastern part of Carnic main Range. South of it, nice is the view on Monte Sernio.

Driving from the south, from Furlania plane, you enter the Val Tramontina in Meduno town. From there, you drive by the valley towards the north, passing Tramonti di Sotto and Tramonti di Sopra.

The road over the pass is narrow and closed most of winter time. On the web it is difficult to find information if the pass is open or closed. Personally it happened to me at least three times that I was attempting to cross the pass and it turned out that the road was closed. In the last years fortuinately by the road this information appears already near Ampezzo and on the other side in Meduno. So, coming from far away, one must be quite lucky to be able to do a winter ascent.

From the huts the situation is clearly ahead of us. In summer, we can decide for a comfortable ascent. The marked path traverses the grassy slopes towards the east. After gaining only 100 meters of altitude, the path reaches the S-SE ridge of Monte Rest and then crosses it. There, we must leave the marked path, which continues across the eastern slopes and down on ex Casera della Forchia, 1385 m. So, we turn left and follow comfortably the grassy ridge all the way to the top. The summit is marked by some telecommunication devices. 45 min from the huts.

In winter (but also in snow-free conditions) it is also fine to go from the huts directly up towards the summit. We keep a bit right of a shallow, grassy valley, but the terrain is passable everywhere.

As said, also skiing down is possible anywhere over the southern slope and the bordering S-SE ridge.

Perhaps no need to mention, but still - when coming down to Casera Monte Rest, don't attempt to continue southwards down! See the above picture! Below the summit grassy slopes there are steep rocky walls everywhere! So, don't be smart, stick to the mountain road!

There are three ascents over ex Forchia alpine pasture, from the NW, from the NE and from the S. For all those tours I think it would be a good idea to leave a bike on the road pass, to shorten the descent by the road (or to have two cars).

Marked path No. 835 starts on the road, just below Rif. Casera Grasia, on 521 m (the altitude of rifugio is 634 m). From the hut you continue in the eastern and south-eastern direction, first along Rio de Grasia, then on 757 m you cross the creek and follow the marked path through the woods and across the slopes south of the creek bed. On 1425 m you reach the saddle (Forca Sopareit), below which there is the ex Casera della Forchia (alpine pasture). There you hit the trail No. 826 (Sentiero Ursula Nagel). You turn right and either follow it till the S-SE ridge of Monte Rest and there turn right again towards the top, or you perhaps can even follow the forested NE ridge directly on the top (I'm not sure if recommended). All together it should be some 3 h 30 min to 4 h of ascent.

You best descend by the normal route to Passo di Monte rest and then down the road to the north (bike?).

Even longer thant the NW ascent is the ascent from the NE. From near Socchieve you go through Avaris, over Val alpine meadow and over Cular alpine meadow till Forca Sopareit, 1425 m (saddle). Only till there it's some 3 h 30 min, then you need to ascend also the summit of Monte Rest, as described on the previous route.

You start the tour on the main road from Tramonti di Sopra to Passo di Monte Rest, on the altitude of 492 m, where the road for the first time crosses the Viellia creek. There, the path No. 829 goes back towards the SE, and then around the southernmost tip of Monte Rest into the valley of Rio Malandrai. Through this valley, the path follows the river bed all the time in the northern direction. This valley is also known as Valcalda. Only when reaching just below ex Casera della Forchia, the marked path ascends in turns towards the NW, reaching the saddle 1425 m and there the path No. 826 (Sentiero Ursula Nagel). There we turn left and ascend on top as described in the previous chapters. 4 hours.

You best descend by the normal route to Passo di Monte rest and then down the road to the south (bike?).

This route goes over the SW walls, exiting at Casera Monte Rest. It is less a true ferata and more a marked and protected hunters path. Exposed and very demanding, requires a lot of experience (rated "D" on the ferrata scale). The entry on the access trail is from the road on 737 m, where you can see also a plate for the Pecol climbing sector which is nearby.

No real support of huts where you would get food or drinks. Casera Monte Rest consists of only a few deteriorated huts, which perhaps in summer serve as shelter for animals.

Rifugio Casera Grasia on the northern side of Monte Rest is close to the main road and is reachable by car.

The closest tourist facilities can be found south of the mountain, in Tramonti di Sopra, 415 m (road connection with Passo di Monte Rest).

Monte Rest can be ascended any time of a year. In summer it is much frequented. In winter it all depends on road conditions. The road over Passo di Monte Rest is opened till the first considerable snow (in autumn and early in winter it is not yet deteriorated). In spring the road is opened quite late, because it takes some time to road services to remove all damages, caused by winter. Adress the touris offices in Tramonti di Sopra or Ampezzo for accurate information!

The summit ascent can be only jeopardised when really there's a lot of fresh snow on the slopes. The western slopes, where the road goes, are also prone to avalanches, coming down by several ravines!