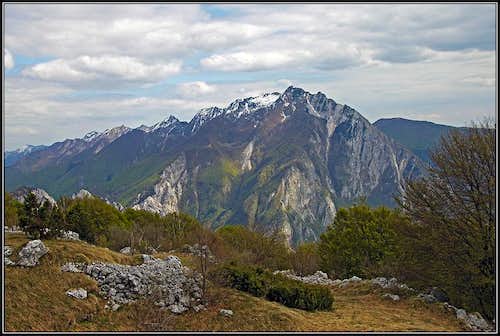 Spring on the plateau of Monte San Simeone. In the distance is Monte Plauris/Lopič.

Monte San Simeone is not very high, but as it is standing isolated, its relative altitude differences make it quite important. And it is unique also in several other respects: historical, natural and as a valuable goal of outdoor activities. Rising in the knee of Tagliamento river Monte San Simeone is characterised by interesting views deep down on the broad river sands, but also on the higher mountains on the west, north and east, of Carnic and of Julian Alps. Towards the south only a much lower ridge of Monte Brancot, 1015 m, is stretching, then the hills of Carnic Alps lower down to Furlania plane. Between Monte San Simeone and Monte Brancot there is the low saddle of Interneppo, 315 m, NW of which there is also a village of the same name. South of Monte San Simeone there is a nice town of Bordano, the "butterfly town".

While in the valleys around the mountain the remains of human civilisation were found even as old as from Ancient Roman times, the records of Monte San Simeone date back to the 13th century, when for the first time the church on its high plateau was mentioned. At that time and in the immediately following centuries it was more important than today. The church was several times renovated, the last time in 1976 when it was completely destroyed by an earthquake. The church stands on a not so small plateau which is stretching south of the summit. On the plateau there are nice meadows with several weekend huts, but a part of the plateau is also forrested. The summit is only some 300 meters above the plateau.

A very special feature is the access road on Monte San Simeone. It is narrow, but asphalted and well maintained. It ascends from the S-SE. In many hairpin curves it goes up over very steep and rocky slopes. The road is mostly wide enough only for one car, but on enough places it is broadened to avoid if you meet another car. This road and a nice panorama from the plateau are the reasons that Monte San Simeone is also very popular with bikers. From Bordano they do more than 1000 meters of altitude in ascent and then return by the same road.

The historical part of the fame goes partially back to the times of World War I and partially back in 1976. During the WW1 Italians had strongholds on the mountain. The most famous one was on Monte Festa, 1065 m, W-NW of the main summit. When Austro-Hungarian army invaded Furlania in 1917, this stronghold kept heroically. The military road to the stronghold is nowadays closed for public traffic, but the point is reachable on foot, by the road or by a marked path No. 838a, coming from the summit plateau of Monte San Simeone. The second historic fact was the strong earthquake in 1976. It had its epicenter just below Monte San Simeone. The neighbouring towns were all destroyed. Very fascinating is for example the story how Venzone was rebuilt after the quake. Today it is one of the most beautiful towns of Furlania, its medieval character was much restored.

Just before the river of Tagliamento exits the mountains, forming its huge sand fields, above its right bank the 1200 m tall and 3 km broad East face of Monte San Simeone rises. It is very interesting also in a geological sense. Its sediments were deposited in the last 100 million years, from the late Triassic till the early Cretacious period. The Triassic rocks are Main Dolomite and Dachstein Limestone. Later different formations of Jurassic limestones were deposited and finally also the youngest Cretacious limestones, such as Biancone and Scaglia Rossa. But in the last 25 million years, in the process of Alpine Orogenesis all these layers were pushed by strong tectonic forces. So, nowadays it's interesting to observe them, being nicely inclined and arranged on a single mountain.

From the clearing on the summit of Monte San Simeone you will enjoy mostly the view on the neighbouring mountain characters: Monte Chiampon / Veliki Karman, Plauris/Lopič and Monte Amariana. Very interesting is of course also the view on other summits of Carnic and Julian Alps and down towards the plane of Furlania. 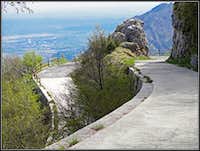 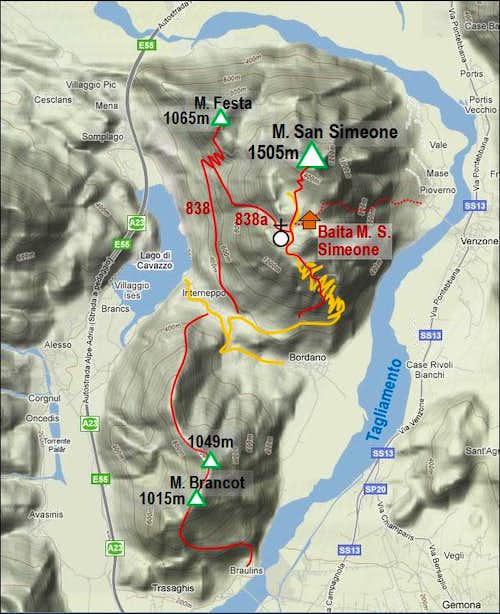 The big majority of people come on top of Monte San Simeone from the south. They drive up by the road from Bordano/Interneppo and continue from the plateau on top.

Bordano lies just south of the mountain, west of Tagliamento river. If you're coming by the highway Udine-Tarvisio, the exit is near Gemona. You cross Tagliamento by a stone bridge near Braulins and drive northwards to Bordano. The second bridge across Tagliamento is opposite Venzone. It brings you to Pioverno from where you drive southwards to Bordano. The other option is to exit the highway near Amaro, NW of Monte San Simeone. From there you drive to Cavazzo Carnico and southwards by the lake of Cavazzo to Interneppo.

Between Bordano and Interneppo is a low saddle where from the main road the mountain road deters northwards. Soon there's a branching on it, the left branch towards Monte Festa is closed, so you drive by the right branch on Monte San Simeone.

The high plateau can be also reached by a marked path from the east, from Pioverno, 270 m. The path must be quite steep and demanding on some places (please post information if you've done the route).

From the plateau of San Simeone, on some 1200 m, you continue by the forrest road towards the NE until on some 1220 m towards the N a well marked mountain path deters. It goes up the steadilly inclinated slope, allways through a nice beech forrest. The clearing is only on the very top where you will find also some telecommunication devices. 45 minutes from the plateau, easy hike up.

On the high plateau there's Baita Monte San Simeone, 1203 m. I guess it's only a restaurant.

In the big quake in 1976 also Bordano was almost completely destroyed. Now the small town is renovated and calls itself "a town of butterflies" - "La Citta delle Farfalle". Walking around by the peaceful town you will notice murals on almost every house, a big majority of them depicting butterflies. And there is also "La Casa delle Farfalle" - where you can observe butterflies brought from all around the world. The gardens are heated, admission fee is 7 EUR.

Monte San Simeone can be ascended any time of the year. The road however is probably not cleaned during the whole winter, even if the altitude is low and it is south oriented. Due to nice panoramic points on the road it is also worth hiking it up.