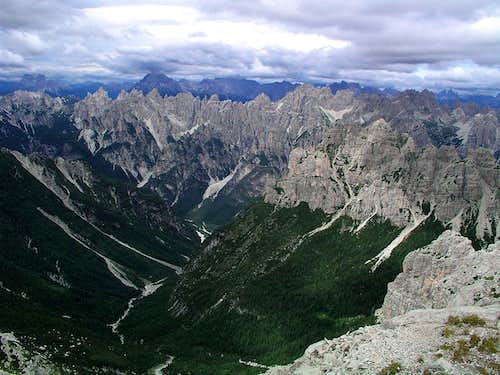 Monte Pramaggiore from across Tagliamento river

South of Tagliamento river and Passo della Mauria there's a wonderful, broad area of wild and lonesome mountains. It is called Prealpi Carniche, an unusual name, considering the fact that Cima dei Preti reaches 2706 m and is only a bit lower than Hohe Warte / Monte Coglians, the highest summit of all Carnic Alps. And the western part of this mountain area consists of a wild crest of high peaks and towers, as beautiful as any area of the 'true Dolomites' across the valley of Piave. The only reason why such magnificent mountains could be called 'Prealpi' could be the fact, that in many sources as Carnic Alps only the long main range on the Austrian-Italian border was referred. This way the area south of Tagliamento is indeed lying before it.

The area of Prealpi Carniche is so broad, that its character is not unique. While the very western part looks like Dolomites, already the groups east of Cimoliana valley are more like the rest of Carnic Alps - more stand-alone limestone mountains, separated by deep valleys. And if in Val Cimoliana a considerable number of visitors is rushing towards the famous Campanile di Val Montanaia, the whole area towards the East could not be more lonesome as it is. Monte Pramaggiore is somehow standing on the border of these two worlds. Still reachable by an easy climb (as opposed to the wild towers of the western chain), still very high in comparaison with the summits on the East and thus a perfect panoramic point for the whole group of Prealpi Carniche.

The mountain is quite a piece of rocks. Actually it is a ridge, descending from its highest point on the NE towards the SW. Even if both faces are rising high, they are not suitable for harder climbing. The NW face is not steep, it is covered with slabs and debris and should be unpleasant to climb. Further on the western side, it's better. The SE face is rocky only on the top. After some 200 meters it continues with a steep grassy slope, falling all the way down to alpine meadows. Besides Monte Pramaggiore, the highest point in the ridge, other elevations are not so important. They go in this direction: Clap Grande, 2435 m, Clap Piccolo, 2423 m, Punta Est, 2441 m and Punta Ovest, 2440 m. From the last one a longer ridge descends towards the NW, and another, shorter one steeply drops down on Passo Pramaggiore, 2137 m. While around the other side, over Forcella Pramagiore, 2295 m, a marked path goes, around this side only a non-marked path goes, connecting alpine pastures. To Forcella Pramaggiore, 2295 m, marked paths and a ferrata are coming from three different valleys: Tagliamento, Cimoliana and Settimana. But still, even on a beautiful day, you must be lucky to meet a mountaineer up there. The mountain log booklet is old, torn apart, it seems as if for years nobody has been taking care for it. I suppose the summit is even more rarely visited in winter. In good conditions must be a nice, long climb, the majority of which can best be done with skis.

The first ascent on Monte Pramaggiore was done by Valentin Stanič in 1826 or 1827. 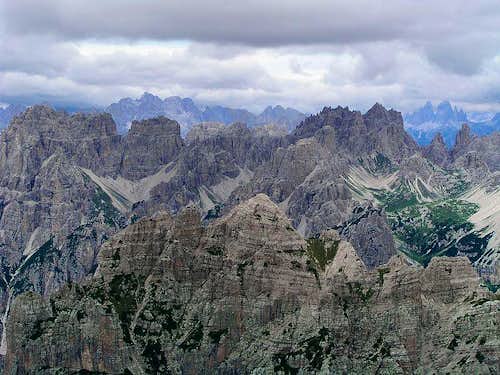 The panorama from Monte Pramaggiore is indeed a magnificent one. The world is simply opened on all sides. Higher mountains towards the West are its most beautiful part. I can hardly remember a more picturesque wild crest as the one beyond Val Cimoliana. Countless sharp peaks and towers, none of them accessible by a really easy climb, stretching from Monte Duranno and Cima dei Preti to Monte Cridola in a nice arc. As Val Cimoliana is closed by sharp peaks also in its eastern side, the whole scenery looks like an amphiteater. Just to stress the difference between the Dolomiti Friulane and the 'real Dolomites' on the other side of Pieve river, from behind this beautiful chain many of the highest summits of Dolomites are peeking: Monte Pelmo, Antelao, Sorapiss, Marmarole, Tre Cime / Drei Zinnen, Croda dei Toni / Zwoelferkofel and others. As said, on all other sides mountains are lower, except of course far on the North, where we can see already the glaciers of Hohe Tauern. Far on the East Julian Alps are beautifully seen. 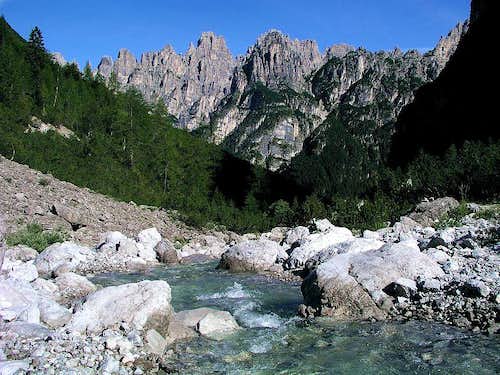 The two valleys, coming to the foothills of Monte Pramaggiore from the south, can be reached either from the East from Maniago via Barcis by the valley of Celina river or from the west from Longarone in Piave valley over Passo di San Osvaldo.

From the confluence of rivers Celina and Cimoliana we can drive along Celina to Claut and from this town further towards the North in Val Settimana (I don't know the condition of this road). The trailhead is the parking place on 907 m, where the trail to Pramaggiore pasture starts.

The second option from the south is the famous Val Cimoliana. You enter it in Cimolais and drive north by a narrow road till the parking place on Meluzzo, 1163 m. As Val Cimoliana is the heart of natural parc, the fee for the road is 5 EUR (in 2006).

The northern approaches start in the valley of Tagliamento. You reach it from the East from Udine-Tarvisio highway, via Tolmezzo, or from the West, from the valley of Piave (Cadore) over Passo della Mauria. The two shortest routes have trailheads in Forni di Sopra, 881 m or 837 m. 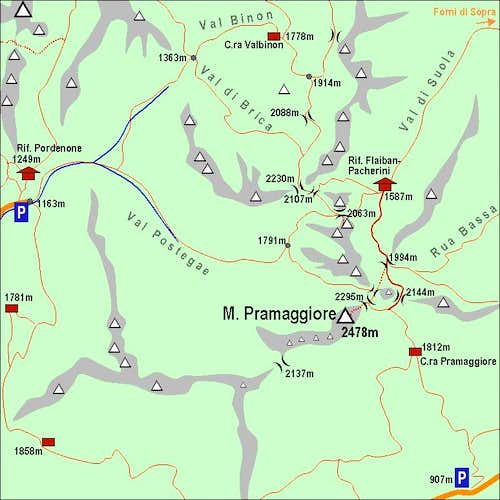 A self-made map of M. Pramaggiore 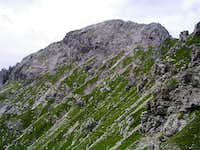 M. Pramaggiore summit from the NE

1. From Val Cimoliana. From Meluzzo parking place, 1163 m, you go through Val Postegae and in the upper part in Val dell'Inferno, reach Forcella Pramaggiore, 2295 m, and over the NE slopes and ridge to the top. Till Forcella Pramaggiore not difficult path (only on a few places steep), from the notch to the summit easy climb (loose slabs, covered with scree require a lot of attention), UIAA I. Marked to the top. 4 h.

2. From Forni di Sopra. From the parking place, 885 m, you go through Val di Suola to Rif. Flabian-Pacherini, 1587 m, further towards the South on Passo di Suola, 1994 m, via Forcella la Sidon to Forcella Pramaggiore, 2295 m, and over the NE slopes and ridge to the top. Till above Passo di Suola a comfortable path, then a steep ravine with ferrata, from the Pramaggiore notch to the summit easy climb (loose slabs, covered with scree require a lot of attention), UIAA I. Marked to the top. 5 h.

3. From Val Settimana. From the parking place, 907 m, through the woods towards the North on Pramaggiore alpine pasture, further on over open grassy slopes on Forcella Pramaggiore, 2295 m, and over the NE slopes and ridge to the top. Till Pramaggiore meadows not difficult, later a steep path over grassy slopes, from the notch to the summit easy climb (loose slabs, covered with scree require a lot of attention), UIAA I. Marked to the top. 4 h 30 min.

As the whole western part of Prealpi Carniche also Monte Pramaggiore is a part of Parco Naturale Dolomiti Friulane. Here is the link to the official page in English: Parco Naturale Regionale delle Dolomiti Friulane. Once there, don't click the link to the parc page, but follow the links to English chapters. Establishing a natural parc here was a great idea. Yes, Dolomites across Piave river are great. One of the greatest mountain areas in Europe. But nature is not preserved there. Once and forever it's gone in its original form, with the exception of a few areas. So we can only hope that the wilderness of 'Dolomiti Friulane' will be preserved. And, if anything, we can admire how big area is protected. It stretches from the main crest on the West almost to the valley of Tramonti on the East, and from above Tagliamento river on the North down to forehills near Cimolais, Claut and Andreis.

As camping is forbidden in the parc, you will for the ascent on Monte Pramaggiore probably use mountain huts or do the ascent in one day.

Monte Pramaggiore can best be climbed in summer and autumn. When covered with snow, approaches to Forcella Pramaggiore can be tricky as some slopes are very steep. That is true even more from the northern approach (which starts in a town), while the other two routes are less exposed, but in winter both valleys are closed and roads are very likely not cleaned. The summit slope is steep, so if covered with snow the complete winter equipment and belaying is recommended. But on the other hand in winter loose rocks are covered with snow so for experienced the upper 200 m of ascent could even be easier. Skiing is possible from Forcella Pramaggiore down to the Pramaggiore alpine meadow (further below woods?), the upper part towards Val dell'Inferno (again woods below), and towards the North from the point above Passo di Suola, cca 2000 m down. All other variants must be harder alpinistic ski tours.