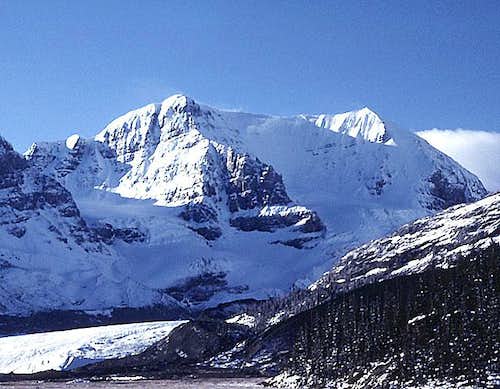 Mount Andromeda from the north.

Mount Andromeda is located at the Columbia Icefields next to Mount Athabasca. It is a very broad peak with glaciers on all sides.

The classic line on the mountain is Skyladder, a beautiful exposed sweeping line of ice on the right side of the mountain. For the climber seeking the ultimate challenge, Andromeda Strain offers it all.

Andromeda sees a bit less traffic then Athabasca, but expect to see at least a couple other teams on the mountain on a nice clear weekend day.

W.R. Hainsworth, J.F. Lehman, M.M. Strumia, and N.B. Waffl made the first ascent of Mount Andromeda in July of 1930 by the South Ridge which they accessed via the Athabasca Glacier.

Mount Andromeda is located at the Columbia Icefields, about halfway between Jasper and Lake Louise on the Icefields Parkway. It is about a 2.5 hour drive from Banff.

A number of climbs start from the climber's parking lot located up the SnoCoach shuttle access road. The gate at the access road's base is left open during the "wee hours" as a courtesy so climbers can drive up to the parking area. This saves quite a hike up....or down.

By the time you descend and retrieve your vehicle from the climber's parking lot, the paved road will be re-gated at it's base to prevent non-climbers / tourists from driving up to the SnoCoach parking area. Please wait for the next SnoCoach shuttle bus to approach the gate & electronically trigger it to open. The wait is rarely long.

Manually forcing the gate open breaks it -- definately a "no-no" if climbers are to retain parking privileges much further up the paved road. Park wardens at the Visitor's Center can provide further clarification if needed.

The mountain is in Jasper National Park and various fees apply. Check this page for current fees: Parks Canada - list of fees 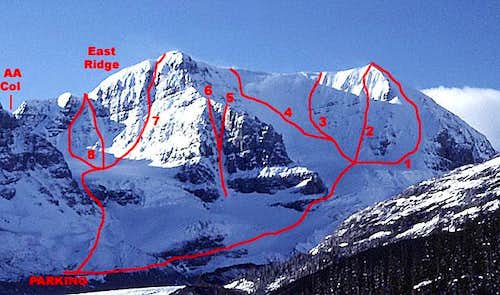 South Ridge The first ascent route. Easy snow and scree on the ridge, heavily crevassed glacier (Athabasca Glacier) on the approach. 6 to 7 hours. Now days used mostly as a descent route. I personally would not recommend it late in the season because of major crevasse difficulties.

Skyladder, II, Snow and ice to 45 degrees, 3 to 9 hours. A snow and ice face leading the to west shoulder of the peak. A Canadian Rockies Classic and the most popular route on the mountain.
F.A. J. Fairly and B. Parks, July 1960.

North Bowl, Ice to 90 degrees. Ascends the face just to the west of Photo Finish and follows a ramp through the seracs at the top.
F.A. R. Boisselle and R. Ware, August 1976.

North Bowl / North Face, III, ice to 45 degrees. Ascends to the saddle between the summits between the seracs to the east and the rock bands to the west.
F.A. J. Gow and C. Raymond, 1966

Shooting Gallery (AKA North Ridge Couloir), IV, 5.9. A couloir starting near the base of the north ridge. Ice to 90 degrees and rotten rock. Severe rock fall danger. Can descend from the top of the ridge or continue on the ridge to the summit.
F.A. T. Sorenson and W. Strugatz, August 1975.

Andromeda Strain, V, 5.9, A2, W4. One of the most popular "hard" routes in the Canadian Rockies. Follows a prominent gully system in the middle of the northeast face. Difficult climbing on poor rock.
F.A. B. Blanchard, D. Cheesmond, and T. Friesen April 16-17, 1983

North East Face Practice Gullies, III. Three short snow gullies on the west end of the face of 40 to 45 degrees. Rock fall hazard in all. Some say misnamed as "practice".

The summer months are the best time to climb the mountain. As the summer progresses and the snow melts the routes will be mostly ice.

For the steeper harder routes, early cold starts are recommended to minimize exposure to rock fall.

Sharon provides the following information regarding camping and facilities in the immediate area:

The Columbia Icefields Campground, located only ~1 km from the Visitor's Center, is traditionally "the" climber's campground / base, although tourists often camp there also. Available are two fairly spacious wood cook huts, each with a wood-fired stove & 2 picnic tables with benches. Not only are the shelters great simply to hang out in, they provide a dry place to cook and hang up gear.

The Icefields Campground is "primitive" and offers no showers. A water tap may provide potable water...although at other times the faucet is out of order, or the water is unpotable. It is often easier simply to bring your own water. If all else fails, a creek runs though the campground; water purification is advised.

A pay telephone & bulletin board for messages is at the campground entrance. Outhouses are clean and modern.

Campsite costs are ~$13.00 CDN / night. There are no reservations: first come, first served. Split firewood is often available for purchase; a metal fire pit and picnic table is located at each campsite. A large bear-proof dumpster provides much convenience, although please be careful to follow all standard bear precautions. Be especially careful not to leave *anything* out; the warden has been known to confiscate items such as Coleman stoves, empty mugs, etc. What the warden won't take, bold "camp robbers" will, including snatching full, wrapped loaves of bread so large the birds have trouble flying off with it.

The beautiful, expansive new Columbia Icefields Visitor's Centre, located on the Icefields Parkway at the base of Andromeda & Athabasca, offers many attractions, even for the penurious climber.

Most importantly, helpful park wardens are based there. Route info, climbing conditions, weather reports, perusal of logbook entries, and climber check-out /check-in are among the services offered. Topos & books are available for purchase. Coin-operated "telescopes" on the outside decks allow scoping of certain routes.

The Glacier View Inn on the top floor of the Visitor's Centre offers the comforts of home.

Downstairs is a very interesting (albeit tourist-oriented / basic) interpretive center. Interactive displays & videos explain glaciology, early mountaineering, & geology. A huge fiberglass relief model of the Icefields mountains and glaciers is fascinating and helps greatly in appreciating the topography and sheer size of the Icefields.

The most used descent from the summit is the East Ridge / AA col.

From the summit begin descending down east, towards Mt Athabasca. After descending approx. 150-200m cut onto a ridge that leads more to the north, towards the buses. In poor visibility it is very easy to miss this ridge.

Walk out onto the ridge. There are 3 rappels do to from here, but it is possible to down climb it. The first rappel is near the end of the ridge and goes down the right (SE) side of the ridge.

After rappelling, continue down climbing and traverse over to the col. It is a short climb up to the col.

Descend the ice face below the col via whatever means you feel comfortable. There is a piton rappel about 40m above the bergschrund. It can be found in the rock to the climbers left.