Twins Tower is a striking summit of grandeur and immense beautiful and home to the most definitive alpine wall in the Canadian Rockies. This incredible giant of the northern Columbia Icefield, is the fifth highest mountain in the Canadian Rockies at 3640m (11,942 ft.) and second highest mountain entirely in Alberta and Jasper National Park. Along with its own twin of North Twin (3730m, 12,237 ft.), Twins Tower defines the superlative of Canadian hard core alpinism with the intensity, purity and adoration of the few routes on the North Face. The South East Ridge, sharing a spectacular col with North Twin, provides the common line of ascent. Twins Tower has been an official name, separate from North Twin, for decades, likely since the 1940’s or earlier. Often the incredibly sheer and stunning North Face of Twins Tower is identified as belonging to North Twin, but is directly below the officially named summit of Twins Tower.

“In one of the more remote valleys of the sub-arctic rain forest called the Canadian Rockies there is a mountain wall which acts like a strong drug on the mind of the observer. So dark, sheer, and gloomy is the North Face of North Twin, like a bad dream, I shall say very little about it.” – Henry L. Abrons AAJ 1966. Twins Tower was first ascended in July 1938 by Chappel Cranmer and Fritz Wiessner via the South East Ridge. The South East Ridge connects to the summit of North Twin. The first ascent of the North Ridge/North West Face was by Henry Abrons, P. Carmen and R. Millikan in July of 1965. The first ascent of the North Face was by George Lowe and Chris Jones in August of 1974.

North Twin and South Twin, The Twins, were named by pioneer mountaineer Norman Collie in 1898 after his and Hermann Woolley’s first ascent of Mount Athabasca, the first recorded view of The Twins. Twins Tower was officially adopted as a name in mid 1900’s for the striking tower north of North Twin. “West Twin” is an unofficial name for the highpoint just west of South Twin. Today, many local mountaineers associate the name, The Twins, with these four 11,000 foot plus summits. Some might also include the unofficial, local name of “Son of Twin” (GR 692867) a prominent 3270m (10,728ft.) high point outlier on the North West ridge of Twins Tower, but this obscure summit has likely only ever seen one ascent.

Twins Tower is approached from the Icefield Parkway (Banff-Jasper Highway (Highway 93)). Depending on the route, the approach is from the Athabasca Glacier for the standard route or from Woolley Creek/Woolley Shoulder/Habel Creek approach to the “Black Hole” for the rarely climbed North Face/North Ridge routes. There are only six recorded ascents from the “Black Hole” to the summit of Twins Tower; four on the North Face and two along the North Ridge/North West Face, as of September 2015. 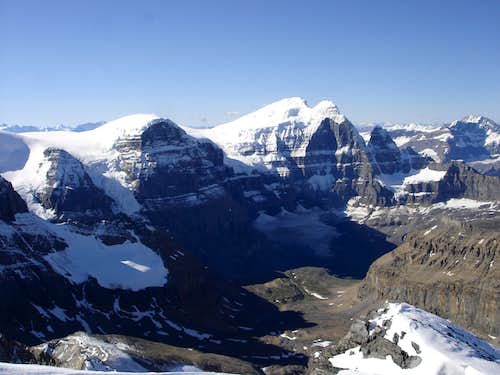 From Calgary drive west 165 km on the Trans-Canada Highway to Lake Louise in Banff National Park. From Canmore drive west 81 km to Lake Louise. From Lake Louise drive west 3 km on the Trans-Canada Highway to the Banff/Jasper Highway 93, drive north 125 km to “Columbia Icefield Discovery Centre” and the toe of the Athabasca Glacier. If heading to the base of the North Face or North Ridge, park as for the Woolley Creek approach. Drive an additional 15 km north to a pull out on the east (right) side of the highway (same parking area and approach beginning as Diadem Peak, Mt. Woolley and Mt. Alberta).

All national parks in Canada require an entrance fee. No permit or fee is required to climb in Jasper National Park. A voluntary safety registration system is available for climbers in the Rocky Mountain National parks. It is necessary to register in person at the park information centres or warden offices during business hours. On completion of the excursion, the party must notify the park by telephone or by returning the registration form. Up to date information about climbing and mountaineering in the Rocky Mountain National parks available at:

During the ski season, up to date avalanche bulletins for Rocky Mountain National parks available at:

Climbers are permitted to bivouac on long routes or otherwise where necessary to safely complete a climb. Some restrictions apply; mostly prohibiting the most popular peaks. A backcountry use permit is required for any overnight stay, contact any Jasper National Park visitor centre, where you may obtain the permit. Most parties will bivy or camp near the North Twin/Stutfield Peak col and ascend North Twin and Twins Tower, then South Twin and “West Twin”, the following day.

Once on the Columbia Icefield the southern edge of Snow Dome must be circumnavigated; generally stay south of the big and obvious crevasses on the south east slopes of Snow Dome, heading west, then angling north, north-west. The Columbia Icefield is not flat, and a serious of glacier hills and valleys are traversed as you head north to your objective.

Generally to ascend any of the The Twins (North Twin, South Twin, Twins Tower or “West Twin”) the base camp should established as close as possible to The Twins/Stutfield Peak Col, about 52.223, -117.408.

From The Twins/Stutfield Peak Col, about 52.223, -117.408 head west, North Twin and its broad South and South-East slopes are very accessible from the col, Twins Tower is usually ascended from North Twin, South Twin and “West Twin” require a traverse south of North Twin to reach their standard routes.

Typical Canadian Rockies situation; best conditions for a ski approach and ski ascent is usually from January to May (earlier means less snow of course), and with July to September usually providing the best conditions for high elevation summer climbing (later usually means less snow of course). Most parties ski/climb Twins Tower in May on the standard route.

Twins Tower essentially has three routes; the extremely difficult North Face provides four variations on the face, but these routes are clustered in a relatively compact area. Only four successful ascents have been made on this face. The North Ridge/North West Face has only had two reported ascents. In contrast, the standard South East Ridge route likely is ascended dozens of times each spring having hundreds of ascends over the decades. In 1983 Dave Cheesmond and Tim Friesen climbed the lower North Face, but traversed off because of difficult conditions and harsh weather; they continued up to the icy North Face of North Twin to the North Twin summit. Canadian climbing and skiing legend Chic Scott has authored many ski mountaineering guide books that provide great information regarding the Columbia Icefield and all The Twins. Chic’s guidebook, Summits & Icefields 1 | Alpine Ski Tours in the Canadian Rockies, was recently updated and provides the best information regarding Twins Tower. Local mountaineer and writer Bill Corbett has an excellent guidebook describing the standard routes up all Canadian Rockies 11,000’ers, 11,000’ers of the Canadian Rockies -

North Face, 5.10, A3, Alpine VI The North Face of Twins Tower is steeped in climbing mythology and is one of the most famous faces in the world. As of September 2015, it has only had four ascents. In 1974 George Lowe and Chris Jones climbed the first route, a line that took advantage of the most moderate ground on the face to gain a final steep pillar that leads to the top of the face. See reference list for links to history and beta on route. Reported ascents: (1) George Lowe and Chris Jones in 1974 (5.10d, A2) (2) Barry Blanchard and Dave Cheesmond in 1985 (5.10d, A2) (3) Steve House and Marko Prezelj April 5-7, 2004 via the Lowe/Jones with some mixed variations (5.10 A3)(traversed to main summit of North Twin after difficult climbing) (4) Jon Walsh and Josh Wharton second ascent of Blanchard/Cheesmond September 9-13, 2013 (2013 grade: 5.11b r/x, A1)

South-East Ridge, Alpine II The line of the first ascent (July 1938 by Chappel Cranmer and Fritz Wiessner), the first winter ascent, and the standard contemporary normal route. Most parties will camp near The Twins/Stutfield Peak Col, 52.223, -117.408 and ascend the South-East Ridge from the summit of North Twin. The south and east aspects on North Twin are fairly low angle and many easy lines are available, some with more crevasse danger than others. The summit ridge of North Twin usually has rolling cornices that are typically well anchored on top of the broad ridge, often a party can ski to the summit. The descent from the summit of North Twin to the col connecting to Twins Tower is the crux with many crevasses and steep snow/ice slopes.

From the col, climb the beautiful snow arête to the summit, depending on conditions can be a post hole snow slog, or an icy exposed climb. Great views through out the ascent, descend the same way.

It's Fritz Wiessner not Fitz.