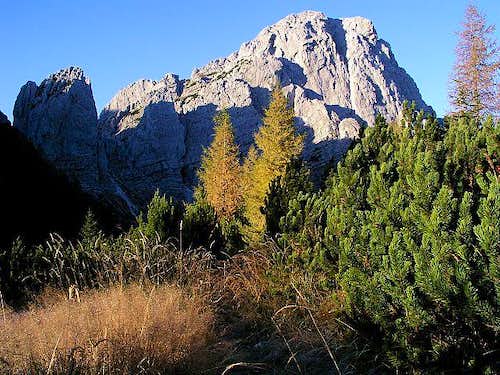 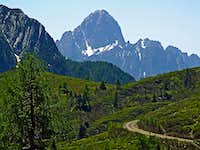 dante - Sèrnio from the NW

The word Sèrnio has its origins in the latin serenus (in Furlani language: Seregnò), meaning a clear place, bare of trees. That the rocky summit, rising above the neighbouring greenery, certainly is.

Monte Sèrnio is to Paularo, like Matterhorn is to Zermatt. Well, I know I'm exaggerating, but you'll know what I mean. Even if hardly anyone knows where Paularo lies, this nice town in its sunny Carnic cauldron has his beloved mountain, rising as a picturesque rocky structure south of the town.

Seen from any side, Monte Sèrnio looks steep and unreachable. If I'm allowed to compare again, it reminds me also on Monte Pelmo. But it does allow normal ascents from two sides, not only from the eastern one. But enough comparaisons. The hard fact is that Monte Sèrnio is the highest summit in its mountain group, belonging to the central range of Carnic Alps. Standing on the very north of the group, together with Creta Grauzaria, Monte Sèrnio forms a fascinating range of walls and towers and is so an attractive alpine region. From these two summits strong crests of wild but lower summits go towards the south, finally culminating with the beautiful Monte Amariana, above Tolmezzo.

Seen from any side, except perhaps from the south, Monte Sèrnio has a form of a nice horn. While the NE face is very steep and can be ascended only by a hard climb, the E and W face allow two steep routes, both marked but luckilly unprotected, which don't exceed the UIAA degree II. So the mountain doesn't have an ordinary hiking ascent, it must be climbed. Towards the East, two sharp towers (Torre Nuviernulis, 1881 m and Cima dai Gjai, 1916 m) connect Monte Sèrnio with the group of Creta Grauzaria, being itself composed of a bunch of wild rocky towers. This is the world of climbers, but, interestingly, from this northern side through gorges and ravines also the most popular ascents to both summits go.

Towards the West Monte Sèrnio would be falling deep down into the Incarojo valley if just before its summit structure there would not stand a long wall of minor but sharp summits, being on top already covered with pine bush and larches. The most outstanding and also a great viewpoint is the summit of Creta di Mezzodi, 1806 m. So if we look on Monte Sèrnio from the west, we can admire a sharp white horn, rising from behind a chain of picturesque minor summits.

The Eastern face of Monte Sèrnio is also steep and high, on its left side steep rocks and a wild gorge are falling down in the valley between Sèrnio and Grauzaria. But on the right side of this face, near the edge of the NE wall there can be found the easiest passages to the very summit.

The southern side of the mountain is the least known - a steep rocky ridge where no popular ascent goes (only a climb of UIAA II) and no path is crossing. The first distinct notch in the S ridge (Sella di Pra Daneit, 1721 m) ends the narrow part of Monte Sernio, then a wild crest of summits continues far towards the S-SW.

The summit of Monte Sèrnio was first ascended in 1879 by two young sisters - Minetta and Annina Grassi.

The summits of Monte Sèrnio and Creta Grauzaria group are build of the triassic dolomite - dolomia principale, superimposed on the basis of older limestone and marl layers, called Raibl formation. That is why the upper rocks are solid enough to enable also good climbing, but on many places the mixture of rocks is also very friable.

The panorama from Monte Sèrnio deserves a special chapter. It's not just because we were standing just recently on top of it in a most beautiful day, but because I believe this panorama is great in any ordinary day too. Carnic Alps are spread in groups over a large territory, so standing on a major mountain like Monte Sèrnio means that views can fly far on all sides. On Monte Sèrnio we are a bit closer to Julian Alps than to Dolomites. But as the latter are higher, views on both these famous groups are equally attractive. Towards the south and south-west endless peaks of Carnic Alps can be seen. We are just close enough to distinguish them all and remote enough not to have the view obscured by some peak. And on the whole northern horizon the long Carnic Main Range is stretching, showing clearly all summits from Monte Peralba and Hohe Warte / Monte Coglians towards the east, while the western part of the range is much hidden behind the highest part. And to add attractiveness to the northern panorama, above the summits of the Carnic Main Range with glaciers and snow covered main summits of Hohe Tauern are rising. All in all, hundreds of peaks you have climbed are greeting you and hundreds of those you haven't climbed yet, are inviting you to visit them.

For the broader overview see the main Carnic Alps page and the Southern Carnic Alps GROUP page! Monte Sèrnio is a bit remote to the touristically developed world.

The eastern approaches start in Val Aupa. The majority of visitors ascend from there Rif. Grauzaria (hut), continue over Foran de la Gjaline saddle and reach the summit of Monte Sèrnio by the normal east face ascent. From the south you enter Val Aupa at Moggio Udinese, lying close to the highway Udine - Tarvisio. From the north you reach Val Aupa from Pontebba (again by the highway Udine - Tarvisio), from where you drive towards south over the Sella di Cereschiatis (saddle), 1066 m.

West Route. It starts on Sella della Creta di Mezzodi (saddle) and ascends over the western face. Marked, but not protected, easy climb. Difficulty is up to UIAA II+. 1 h. Approach. The Sella della Creta di Mezzodi (saddle) can be approached from Casera del Mestri - No. 416 (1 h), or from Lovea via Rif. M. Sèrnio - No. 416, 419 (2 h 30 min). So far I couldn't find any data about harder climbing routes in Sèrnio's N face. Please add information!

There is however also the third route, much less frequented and even a bit more demanding. It's the S-SW ridge. The natural start of that route is Sella di Pra Daneit, 1721 m, the notch which can be best reached by a weak, unmarked trail from the W side, from near the ex Palasecca di Mezzo hut. The terrain is overgrown and the ascent is not pleasant, nor marked. 1 h 45 min till the notch, (2 h 45 min from the Stavoli Champees parking place).

The continuation on Monte Sernio is much more demanding. It's an unmarked climb of many exposed sections of UIAA II degree, lasting as much as 2 h 30 min. To avoid crest towers we must switch many times traverses (left and right), so also good orientation is required.

Monte Sèrnio can be climbed any time of the year, but as normal ascents require some rock climbing, dry seasons are most recommended. In winter and early spring also the normal ascent would require a complete winter equipment - ice pick and crampons.

Monte Sèrnio and its long, wild south ridge, seen from the west

If you have information, please contribute, especially the following: