Although Peavine Peak is located in Nevada, it is not at all remote. In fact, several thousand of people live around its slopes and it sees a lot of activity year-round. This is because Peavine Peak dominates the skyline north of Reno, Nevada. At 8,266 feet it rises nearly 3,800 feet above the city. The mountain is regularly hiked via a serious of dirt roads that run up and down the mountain. Peavine is unique because it stands virtually alone; separate from any specific mountain range. It drops off at least nearly 3,000 feet on most sides, and has over 2,200 feet of prominence with the Sierras to the West. Due to its proximity to Reno, this is generally not a peak that people set up campsites. The nearby wilderness in the Lake Tahoe area is far more suitable for camping. In fact, Peavine Peak is often biked and motorized vehicles can drive to the summit. What Peavine offers is accessibility, miles of dirt roads, and interesting views, in part because the mountain is mostly devoid of trees. Peavine Peak has two summits.  You will reach the higher west summit first.  You can also do the east summit, although it is about 8' lower. The snow on Peavine Peak comes and goes during the winter months. A winter storm may cover Peavine from top to bottom and snow, and it will melt a week later. For example, the first photo below shows Peavine Peak three days after a major snow event in February 2007 and the second photo shows Peavine Peak four days later, by which time the snow had melted. 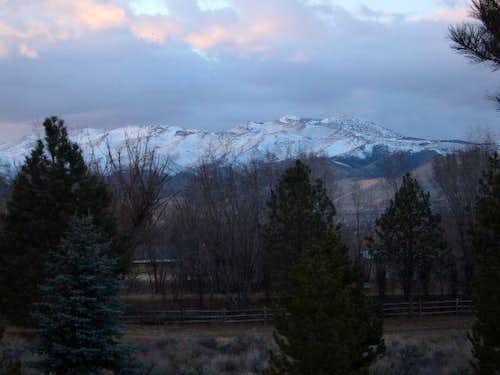 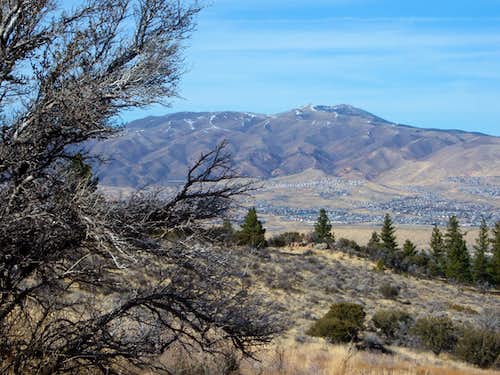 Ultimately, Peavine Peak is best hiked in March-May (depending on snow conditions) and September through November. Avoid hiking in June through August due to the heat.

There are many routes up Peavine Peak. You can take dirt roads up to the summit, even without a 4WD vehicle. This will make your car pretty dirty, but it is doable if you just want a nice view.  You can hike up the back side (north side) by going south from Red Rock Road.  You can go from east, west, or south.  The south routes are probably the most popular.  I will describe three routes below. Poeville Canyon Road - long route; Robb Drive - medium route; and Peavine Road - short route. All three come together at roughly the same point. Poeville Canyon Road This is a long route that allows the mountain to be hiked from base to top. This route is 10-11 miles round trip.  It is good for mountain bikes and trail runners because it is pretty gradual. The trailhead can be reached by taking 395 north of Reno to exit 73 (Golden Valley Road). Head west on Golden Valley to North Virginia Street. Head northwest on Virginia Street for about 1 & 1/2 miles until you reach Seneca Drive. Take a left on Seneca and drive for another 1/2 mile. Take a left on Kiowa Drive.  You will find parking at the end of the paved section. From here you can park freely. After you park your car, take Poeville Canyon Road (FS 645A). The road is not marked at the trailhead, but you head towards the trees. Hike the road as it goes just to the right of the trees. You will stay on this road as it winds around hills leading to Peavine Peak. After about two miles you will reach a steep incline. At the top of the incline, you will see what used to be a small mining town down below. Take a left up an even steeper incline. Once at the top of this incline you will see the summit ridge in the near distance and a number of roads heading that direction. You can reach the same spot by avoiding the first incline and following FS 645 eastward around another ridge. This will take you to the Peavine Road and the same spot in about 1 mile. While this is a little longer, it is more gradual. Once on Peavine Road your objective is the gully in the photo below. This gully is easy to get to. Follow Peavine Road up until it turns towards a tree covered slope. A jeep road heading directly towards Peavine connects with the road up the gully. The gully road follows power lines up to the summit ridge. 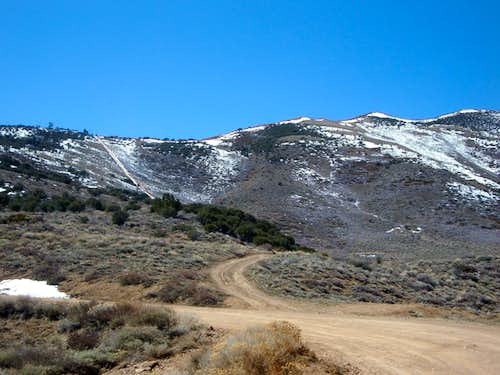 Click on the photo to see the route up the summit.

You can take this gully to the summit ridge or you can actually continue past the road leading up the gully or continue up the road to its terminus for another 1/2 mile and 500 feet. From there you can simply walk up the open slope to the ridge. When you reach the summit ridge, you will find a steep, yet direct, route to the summit. The summit has a twin, which is about the same height. It takes about 5 more minutes to reach the second summit from the first summit. Whether you take the gully or the other alternative, the total hike is 5 miles one way, rising about 2,900 feet, with some ups and downs on the way back making for more than 3,000 feet of total elevation gain. From the summit you will have a 360 degree view of the surrounding mountains. You can descend the same way you came, but the road with the power lines is very steep. When I hiked it, the gully road was covered in snow. I chose to take the Peavine Summit Road back down, which added about 1 mile to the descent. Robb Drive One of the most direct ways to Peavine is to start at the top of Robb Drive.  This is probably the most direct route from paved roads.  Drive up to the top of Robb Drive, which can be accessed via I-80 west of Reno.  Once at the top, take a left on Peavine Hills Drive, and go 350 feet to a trail start.  You are parking in a neighborhood, so you can park on the street.  There is room for 4 or 5 cars. The route is pretty direct.  Head straight up to a trail on the right side of some willow trees.  The trail follows a canyon and gains a lot of elevation.  After about 1 1/4 miles the trail turns into a road.  Follow the road as it heads left and avoid side roads.  Eventually you reach a plateau just below Peavine Road.  From here you can take Peavine Road to the summit for a one-way distance of 4 1/2 miles.  But once you get on Peavine Road, you can take your first right, heading towards electrical equipment.  This road is steep, but will get you to the west summit after another 1,200' of hiking.  One way to the west summit is about 3.8 miles.  The elevation gain is about 2,820'. 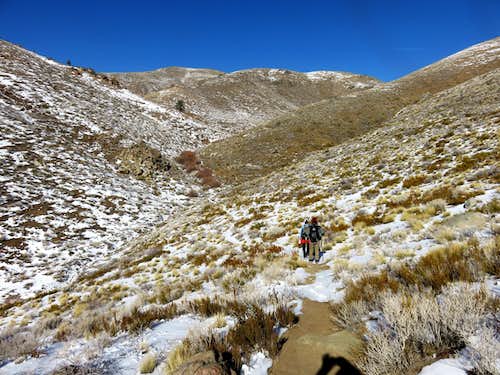 Group heading up the canyon via the route from Robb Drive 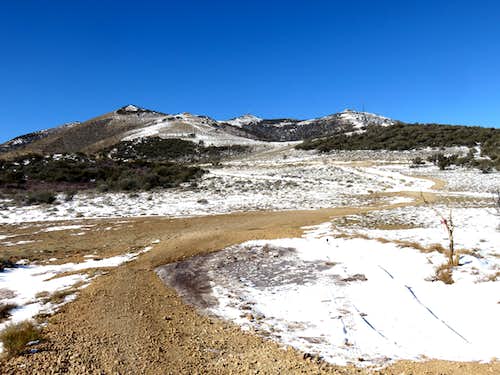 Peavine summits from the plateau above the canyon

Peavine Road The most direct way to summit Peavine Peak via an easy day hike is to drive up Peavine Road to the base of the main Peavine summit ridge. This route cuts off the first half of the Poeville Canyon Road route. To get there, follow 395 North to exit 76 - Stead Blvd. Exit the interstate and take a left (west) towards Virginia Street. Take a right (north) on Virginia Street and follow for about 1/2 mile. On your left is the unmarked entrance to Peavine Road. This is a dirt road, which is rough at places. You do not need a 4WD, high clearance vehicle, although it preferential. Follow Peavine Road for 2.8 miles, past an old mining town to a hilltop (see photo). 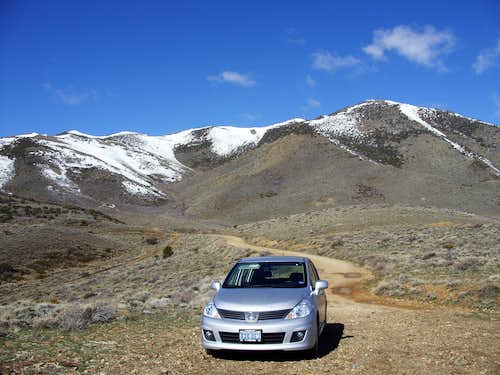 Access varies depending on the route. Because there are plenty of accessible routes up the mountain, red tape generally isn't a concern unless you go off of the road/trail. The only issue of concern is that there is private land on some of the lower slopes of the mountain. Generally, there are signs indicating this. Just be mindful when on the lower slopes and park in appropriate places, and be respectful. The only other issue of note is the nuisance of target shooters. There are lots of folks who set up targets on parts of the mountain and it is common to hear bullets. People often leave empty shells with mar the landscape. Generally, there isn't any threat from these folks. Hikers should just be aware of them.