Kaweah Queen, along with Lawson Peak, anchors the north end of the remote Kaweah Range. Overshadowed by its distinct neighbor Black Kaweah and overlooked on the Sierra Club Angeles Chapter’s Sierra Peaks Section peak list, it nevertheless is a worthwhile objective if exploring the 9 Lakes Basin area. Like its neighbors, Kaweah Queen has exceedingly loose rock and care must be taken during the climb. First recorded ascent was by Gerald A. Gaines, C. A. Gaines, and H. H. Bliss on July 11, 1924, probably from Lawson Peak via the northwest ridge. 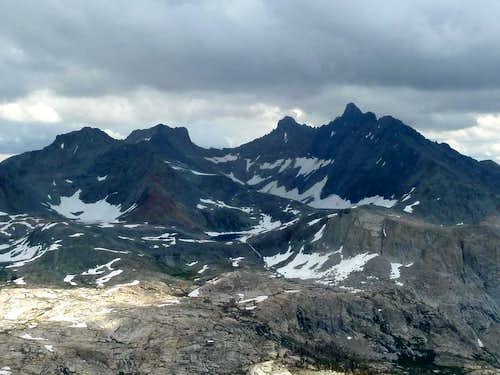 While Kaweah Queen can be approached from a variety of directions (given enough time and fortitude), the easiest routes are from the west. The Black Kaweah page has excellent directions on the two primary western approaches which accesses the 9 Lakes Basin. 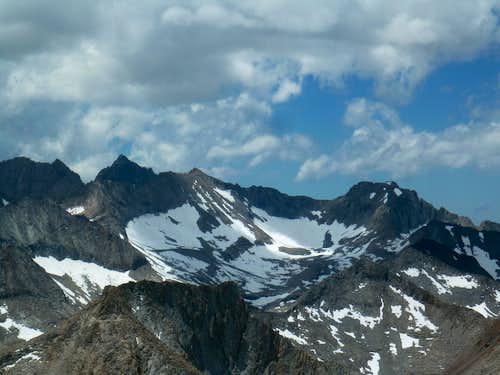 Everything you need to know about permits, regulations, and driving directions can be found on the NPS SEKI web page (western approach) or the Eastern Sierra - Logistical Center page (eastern approach). While overnight hikes require a wilderness permit, day hikes can be done without red tape.

Climbing can be done in almost any season but May through October are the most popular times. In heavy snow years, the chutes and slopes may hold residual snow. Check for current weather.

View south from the summit: the many challenging Kaweah peaks (Jul 10)