Nevado Salkantay is the high point of the Cordillera Vilcabamba in the Department of Cusco, Peru. It is the highest mountain in the area of Machu Picchu and is the most Sacred Mountain in the Land of the Incas.

The name is derived from the Qechua "Sallqa", which means savage or invincible. This is due to the frequent avalanches that rip down the mountain and storms that rise to engulf the peak from the High Amazon Jungle in the north.

The best time to climb Salkantay is from May to September. Depending on the route, it should be tried at different times in those months. For example, the Ridge is easier to attempt earlier in the season with more snow, but later on it becomes more technical as the glacier melts later in the season. A wall or other direct route should be attempted later in the season after the avalaches have had time to fall.

Since the first ascent in 1952 Salkantay has beeen climbed on the South, East and North sides of the mountain. The west face and ridge still are unclimbed as of 2014. To date there have been 21 successful climbs of the mountain, here is a summary of the activity:

1st attempt: 1950 – Piero Ghiglione (Italian) led an Italian expedition to explore the southern Andes. The tried to climb Salkantay on the SE face but made it to 5,600mts.

2nd attempt:July1952 - The Swiss-Peruvian Felix Marx and Marcus Bronimann (Switzerland) make it to a sub-summit about 6,100mts on the NE ridge.

Attempt: 1954 - Fritz Kasparek(Austrian, part of the first team to conquer the North Face of the Eiger) and his partner Anton Wahenauer were killed when a cornice broke off of the NE ridge at about 5,900mts. The other two climbers Waschek and Ambichl survive and the expedition retreats.

Attempt: July 15th, 1973– Jose Astudillo, Antonio Alcalde (Spain) made it to 200mts below the summitbefore a storm stopped them while trying a New Route on the North Ridge.

Attempt: July, 1986 - A Peruvian Team was attempting the NE side of the peak but was avalanched off quite low on the mountain.

Attempt: June 19th-21st, 1988 – Hanz Zebrowski (German) and Alberto Callupe (Peru) made an attempt at what they said was a new route but isactually along the Austrian 1968 route: the direct North Face to East Summit.

Attempt: June, 1995 – The Andean Expert John Biggar has informed me that 2 Scotsmen climbed the NE Ridge at this time. There may be an ascent, but there is no record of this climb in AAJ and I have not seen any supporting evidence.

Attempt: Argentinian Expedition that ended in tragedy when 12 of the 13 climbers perish in an avalanche.

Attempt: June, 2005 – Christian Klant and Nick Cristof (German) went to the NE ridge. Klant was sick so Cristof attempted to climb solo on the 23rd, by the 25th he didn’t return so Klant went for help. Cristofs’ body was never found in the subsequent search.

Attempt: June, 2011 – Nathan Heald (USA) and Edwin Espinoza Sotelo (Peru) made it to 5,900mts on the NE ridge. A rising storm forced retreat and the pair spent two days trying to get off the mountain in white-out conditions.

Attempt: July 30th, 2011 – Nathan Heald (USA) and Luis Quispe Condori (Peru) make it to 5,700mts on the 1978 Yugoslav route. They were too slow and the rising temperatures made the conditions too dangerous to continue.

Attempt: June 15th &16th, 2012 – Nathan Heald, Kyle Hayes and Nicholas Engl (USA) make camp on the NE ridge at 5,250mts. Two of the climbers have altitude problems so Nathan climbed to the crux at 5,800mts but could not traverse safely without a belay.

Attempt: July 2012 – An Argentinian team tried to climb the NE ridge making it to below the crux at 5,700mts. A farmer who livesclose to the mountain provided this information, we also found a new sling wrapped around a rock at 5,600mts which provides solid evidence of their party.

Attempt: June 2014 – Rob McCallum, Doug Bartholomew (U.K.) and Gerry Galligan (Ireland) attempted the NE ridge in the beginning of June. One had trouble with acclimatization, some explorations were made of the ridge and surrounding area by the other two. By the time they made it to Camp1 on the 13th the weather window closed and they were forced to retreat.

Note: A few other attempts have been made at Salkantay but they have either ended in tragedy or there is no official account of it. Some of these attempts I have heard in unofficial accounts from the people who live close to the mountain. Due to reduction inthe glaciers size on Salkantay since the first ascents of the 1950’s, difficulty of the routes may be quite different in the present day. Also we may never know if the Incas were able to ascend, at least to a certain height on the mountain. The glaciers would have been lower and possibly much less steepin their era. All historical records of these climbs are found in The American Alpine Journal, UK Alpine Journal, NZ Alpine Journal and several other publications. 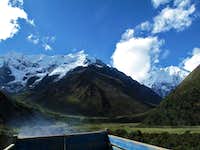 The mountain is most easily accessed through the town of Mollepata, off of the Cusco-Abancay road. The trip is about a 2 1/2 hour bus ride from Cusco. Collectivos (15soles) leave from the stop, "Arcopata" in Cusco with service to Mollepata. In the collectivo they may ask you to pay a little more according to your baggage. From Molepata another hour and a half in taxi or truck takes you to the trailhead at Soray Pampa. A private taxi to Soray Pampa should be 100 soles. In the back of a cargo truck it is 15 or 20. It is the same as the start of the Salkantay - Santa Teresa - Machu Picchu trekking route.

Base Camp for the NE Ridge is two days travel from Mollepata. Day 1 crosses the pass at Incachillaksa (5100m) and finds good camping in Quebrada Sisaypampa (4200m) about a 6 hour hike. Day 2 crosses abra Palqay (4,700mts) and turns left (west) toward the mountain and arrives at Base Camp (4700m) below the NE Ridge, only 3hrs hiking. A strong, acclimatized team can do the hike to BC in one day from Soray Pampa. 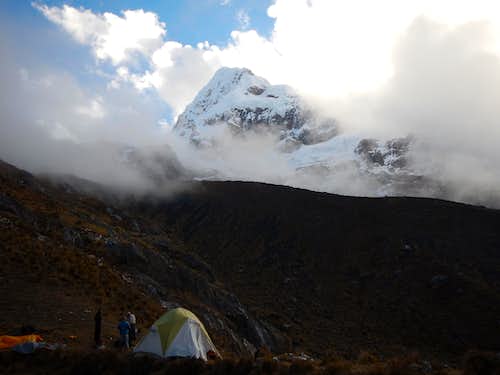 At BC on the NE ridge route of Salkantay

Arrieros should be arranged in Mollepata. The price is 40soles/day($14) for Arriero and also 40soles/day($14) for each mule. The Espinoza family has a restaurant on the north side of the plaza de Armas of Mollepata. They can arrange arrieros/services to arrive to Base Camp. Edwin Espinoza is one of only 2 Peruvians to have summited the mountain, he has great knowledge of the area.

There are two summits of the mountain East and West, of about equal height. Before 1970 the west summit was 30mts higher until the summit block collapsed rendering them both about equal. In early season the East summit is higher from the accumulation of snow, later in the season the icy West summit stands a few meters higher.

There is no standard route on the mountain, but the most frequent routes climbed is by the NE ridge or the North face. 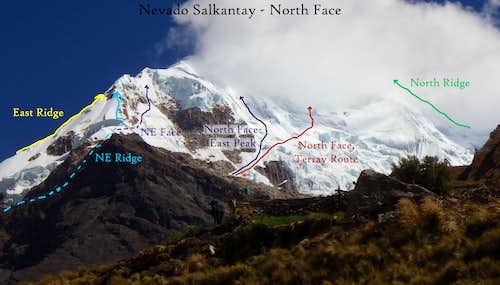 Routes on the NE ridge and N face of Salkantay

The South face, seen from Soray Pampa has one complete route to the East summit (English 1986), the west buttress was climbed by a German team in 1970 but only to the top of the buttress before the west summit.

The SE ridge and face also have a few routes but they are a higher level of commitment. 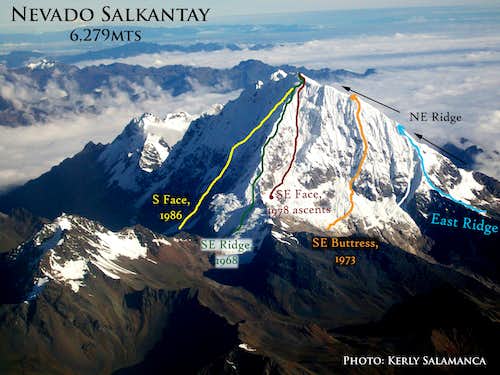 Routes on the East face of Salkantay 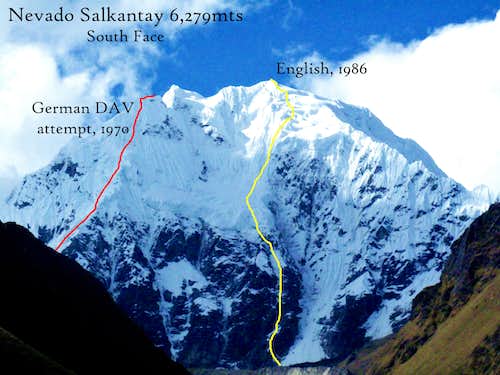 Routes on the South Face of Salkantay

On June 17th, 2013 I completed this route with Thomas Ryan(USA) and Luis Crispin (Peru). A month later I made the East summit a second time with James Lissy(USA) and Edwin Espinoza(Peru).

From Base Camp(4,600mts) follow the left side of the moraine until it arrives to a short section of rock before the glacier. 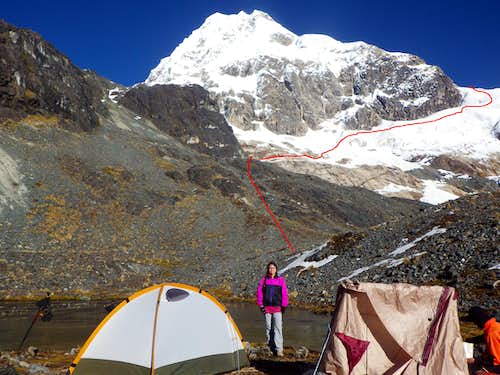 Route to enter the NE ridge

After gaining the snow, traverse right under the face and up to the NE ridge at 5,250mts. This should be done early in the day to avoid falling debris from above. Some may think it wise to camp here and attack from this point but it is quite far away still so it is recommendable to continue up to 5,500mts.

Once on the ridge there are easy but exposed class 5 rock sections in between exposed snow climbing on the ridge. Continue up 250mts(in altitude) to a large ice shelf perched on the ridge at 5,500mts. 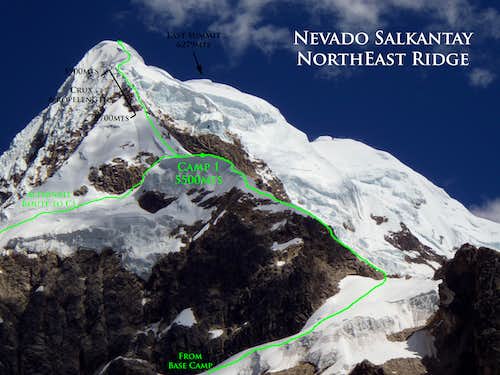 Overview of the route

Here the real climbing begins. Leaving Camp 1 there is a 200mts wall of snow at 65-70°. Then the ridge narrows to be quite thin and with several vertical steps of 3-4 meters, forcing the climbing to be on the north side of it. At about 5,800mts there is an ice tower perched on the ridge which has to be traversed up and over to the other side. This is probably the most dangerous part of the route and is very exposed. After crossing the tower another 4 ropelengths of steep (70-90°) gets you out of the crux and the ridge begins to widen. 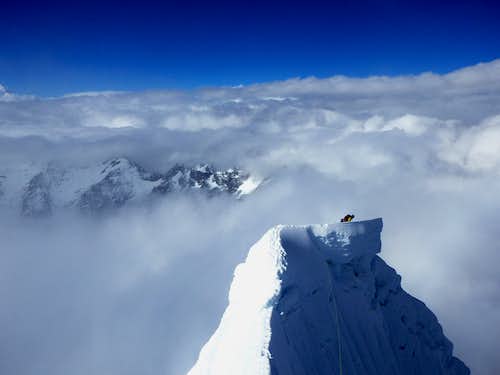 Traversing the ice tower on the NE ridge 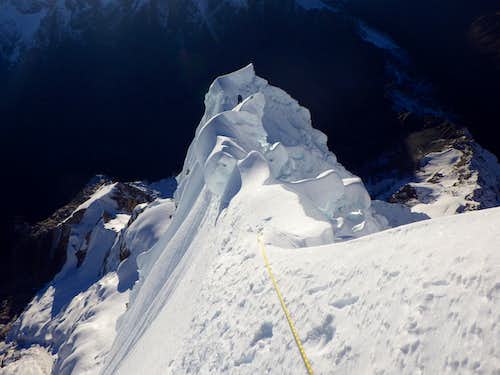 After the ridge widens a crevasse must be crossed and then the hard part is breaking trail to the summit. A sub summit is crossed (the same one Felix Marx and Marcus Broennimann arrived to in a storm in 1952) and then another 45 minutes of trail breaking and navigating crevasses put us on top. 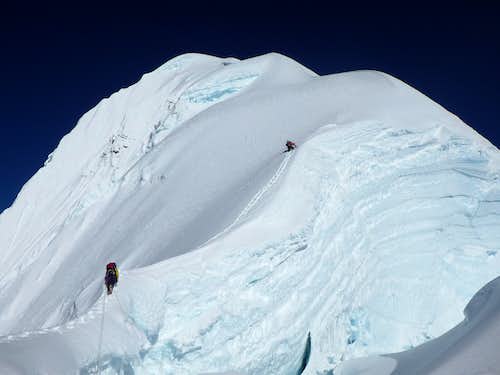 Crossing the crevasse to the wider ridge 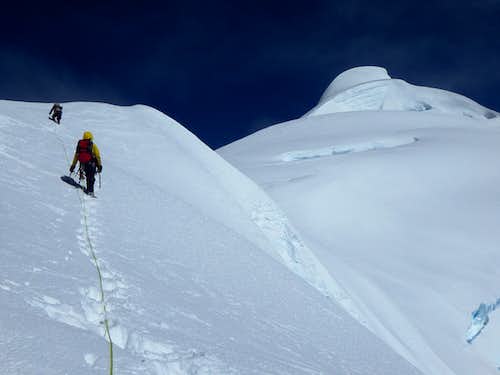 Summit! Then we retraced our steps, down climbing the ridge. All in all the day was 18 hours round trip from Camp 1. 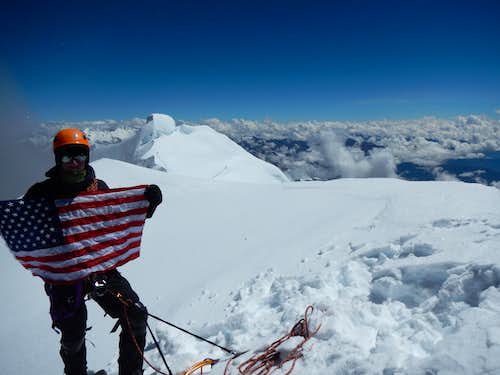 Summit of Salkantay 6,279mts, with west peak behind 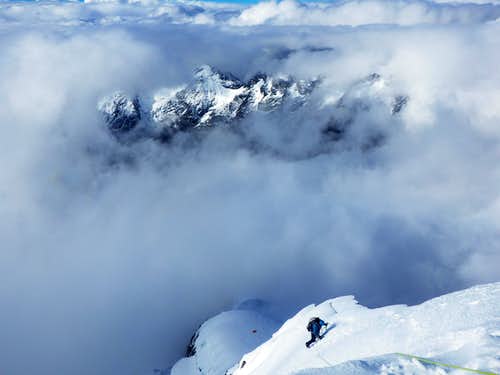 Luis down climbing back to camp1

In recent years the Salkantay trek to Machu Picchu has become a popular alternative to the Inca Trail to get to the archeological complex of Machu Picchu. In fact it has become so busy that in the high season (May-September) there are up to 250 tourists that take this trail every day. With them comes the obvious impact on the area like garbage and noise which will diminish the experience of anyone looking for a trail that is "off the beaten path". It is not the remote trail anymore that the agencies selling the trek would have you believe. The route to the Base Camp on the NE ridge also is an alternative Inca Trail that used to be traveled before a landslide went down the Ahobamba Valley North of Salkantay in 1998. Today this trail is known as the Salkantay Base Camp Trek, it has been rebuilt and it offers a much more rewarding experience for the would be traveler to trek to Machu Picchu.

Link to the American Alpine Journal of the first ascent: http://aac-publications.s3.amazonaws.com/documents/aaj/1953/PDF/AAJ_1953_8_3_387.pdf

Here is a video of the 2013 ascents of Salkantay: https://www.youtube.com/watch?v=5GR-mkHbOxE

The American Alpine Journal 2014 has these climbs on page 201: http://publications.americanalpineclub.org/articles/13201212578/Nevado-Salcantay-northeast-ridge-rare-ascent