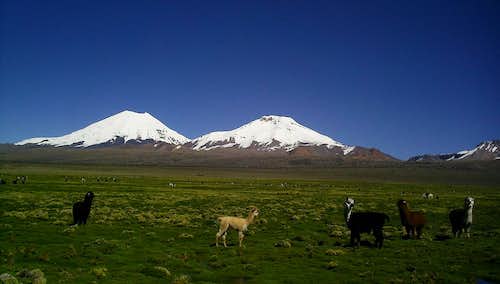 Cerros de Payachata, means twin mountains (Payachata=twin, in Aymara, the local indigenous language) and there are only two peaks in the range. It is usually counted as a sub-range in the Cordillera Occidental. Parinacota is slightly higher than its twin brother/sister Pomerape (6282m). Both volcanoes are right on the Chilean - Bolivian border and can be climbed from either side. Their closest neighbor is Bolivia's highest mountain Sajama (6542m) which isn't more than 20km away.

Parinacota is an active (fumeroles) stratovolcano and had its last real eruption about 1700 years ago. The crater is about 300m wide and 250m deep and young lava flows on the peak's western side is a proof of quite recent activity. Pomerape is considered to be dormant and an older mountain, so strictly speaking, these two peaks are only twins by appearance, not by birth. 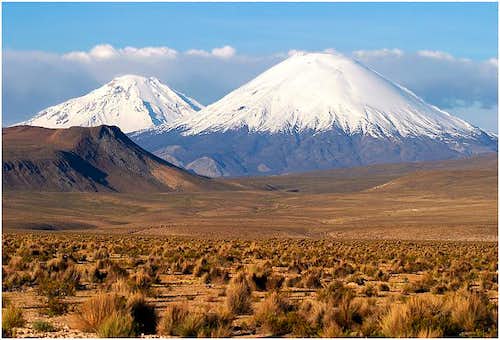 Parinacota collapsed about 8000 years ago and produced a huge debris avalanche that traveled 22 km in a westerly direction. This debris blocked drainages and formed Lake Chungará, the area's largest lake.

Because of its almost perfect symmetry and good-looking snow cap, the peak has become a favorite for tourists, photographers and of course climbers. The normal route is a walk on scree and later ice/snow and as the inclination seldom becomes steeper than 40 degrees, basically any fit person can make a try to summit this extraordinary beautiful mountain.

Parinacota was first climbed in 1928 by Joseph Prem and Carlos Terán.

Parinacota is located in the extreme NE of Chile, where the country borders to Bolivia. The closest really large city is La Paz, the capital of Bolivia, which is about 300km and five hours away. Arica, in Chile is at the Pacific coast and is about 180km far (and almost 5000 vertical meters!).

You can also jump the bus/hitch at Parinacota village (very small) and walk in from there. There is a refugio on the southern side of Lago Chungara, which can serve as a base for the night as well. The Lauco National Park ranger station is also located here and the rangers are the ones to ask about the best route to the mountain's foot.
Walk in from all the mentioned places is ranging from 10-15km. There are plenty of tracks from the ranger station, but just walk towards the peak along the one that looks most well-travelled.

The main climbing season is from late June to mid September. This is the winter season of the southern hemisphere. It's also the time with the lowest precipitation and most stable weather. Between May and September there's almost no risk of any rain or snow at all.
A simple info page with all the basics.
For a more details and forecasts look at Meteoexploration's info for Parinacota.

It's a high probability you'll pass the border posts between Bolivia and Chile one or two days before your intended climb of Parinacota. The border police usually have good info about the weather and if they don't, ask them to call HQ for a fresh forecast.
On both sides there are National Parks and the rangers will help you out with weather forecasts.

Technically speaking, Parinacota is a very straightforward climb, but be sure to bring an axe and crampons as there can be some icy parts.

Camping is allowed everywhere, but pay really good attention to your tent. Thefts have been reported. One person lost the tent and everything in it and she was only away from the camp spot for about three hours.
When climbing in Peru, Ecuador and Bolivia I usually break camp, hide the folded tent and all the gear I don't need on the climb. 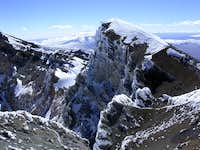 The true summit seen from a false summit

Football In The Neighborhood!

Parinacota and Pomerape is not as often climbed as the higher neighbor Sajama. A happening worth mentioning, (even if it didn't take place on Parinacota) is the football match on top of Sajama.