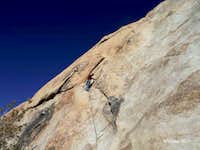 Dow leading Last Angry Arab, 5.6*
Nomad Dome would only light up on your radar, if like myself, you were looking to join the 1000 route club at Joshua Tree. It has zero multi starred routes on it.  It is "relatively" remote to reach albeit not far from the well-traveled wide canyon wash in Wonderland South that leads to the Astrodome climbs as well as other classics further in. Rather it lies in an obscure location, by itself for the most part, to the north of this well-traveled area. It is hidden behind Freak Brothers Dome and Surprise Rock. It does not take much of a feat to reach it once you leave the main wash, but Nomad does not offer much in the way of quality climbing to balance the effort. 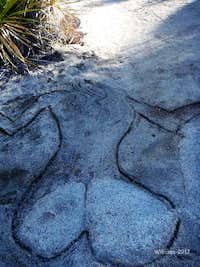 Someone getting creative
The most difficult route has one move or two moves at the grade (Ben, 5.10a). From there you drop down to three 5.6-5.7 routes that are side by side. They are average for the grade. The 5.5R route to the far right of the south face is best soloed. There are three fixed anchors on the dome in good shape as of 2017. One atop Ben, one that services two of the others (sport routes) and one that essentially serves as a summit rap if you go to the top (far right end above the 5.5R). Several of these routes were put up in the 70’s and are relatively stiff for their grade.

The approach can be a pain to find per Miramontes guide description.  My description is as follows. Park at the Wallstreet Mill (Wonderland South) parking area. They look to be paving it as of 2017, however it has been a sandy parking lot up to this point. Hike past the “Pink House Ruin”. Enter the wash and head northwest following the wash as you would for the main routes on South and North Astrodome. Once you are even with these large domes located on your left. Surprise Rock and Freak Brothers Dome are on your right. Nomad is hidden behind these domes to the southeast. There is no beaten path. Just head for the right side of Surprise Rock and identify Nomad Dome from the attached photo relatively quickly. Maybe only 15 minutes from the main wash to the base of the south face where these five climbs are located.

Routes Listed Left to Right as you face the South Wall