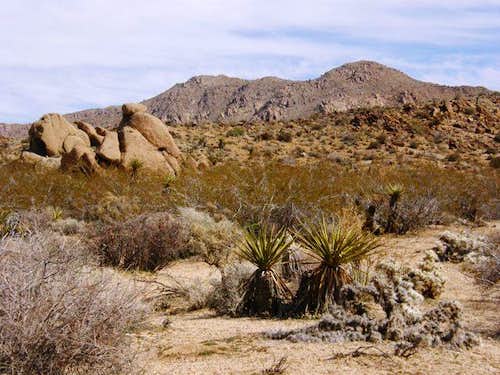 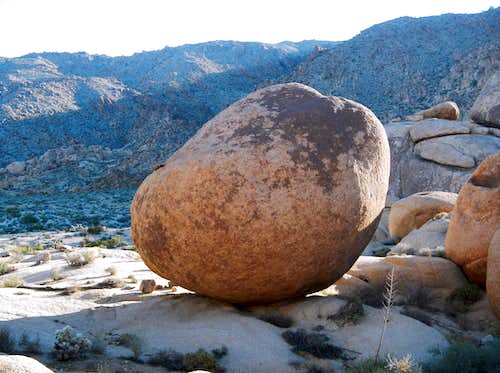 Giant Adamellite Boulder
Aside from the view, Eagle Mountain has two main draws which attract peakbaggers from distant places who are working peak lists. The first draw is the Sierra Club’s Desert Peak Section list.  Eagle is one of only 3 peaks inside the national park which are included on that list, the other two being Spectre Peak and Pinto Mountain. The second draw is the CA P2k list (peaks with 2000 feet or more of prominence). If you’ve never heard of listbagging or the prominence religion, don’t worry yourself about it because it’s obscure, nerdy and leads to a lot of bizarre behavior. 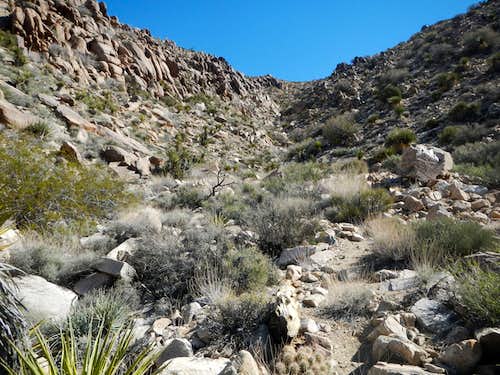 The West Canyon
Back to the peak. An ascent of Eagle Mountain will require crossing 3+ miles of open desert and navigation of sandy washes, rocky ditches, and piles of quartz monzonite boulders also known as adamellite. The standard route ascends the west facing draw to gain the upper plateau. Careful route finding is necessary on the upper mountain where rocky obstacles can present serious challenges.

Plant life in this part of Joshua Tree is somewhat dense. Some of the species present here are yucca, mesquite, creosote, palo verde, ironwood, ocotillo, cholla and other cacti. Many of these plants have sharp natural defenses meant to deter animal contact. You will know immediately if that happens to you. Exercise care and give sharp plants the space they require.

You have two options. The first is to park at the Lost Palms Oasis trail and take the trail as far as Mastadon Peak before venturing off to the northeast. This will put you closer to Eagle Mountain, but it is a less direct route overall. The second option is to park in the Cottonwood Campground and hike east by northeast to reach the mouth of the canyon. Mastodon makes for a good add-on because it is a fun scramble and a good viewpoint, but in itself is not really much of a peak.  These routes gain 2350 feet and are either 10.5 or 11 miles round-trip depending on your choice. 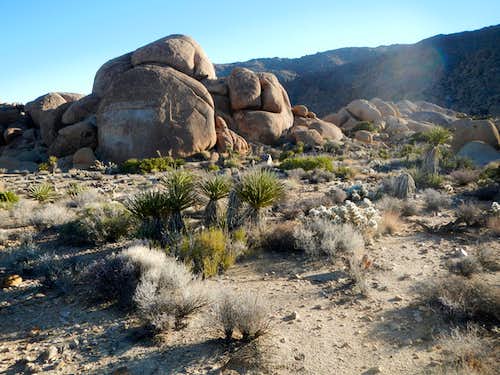 Eagle Mountain Approach
Regardless of where you start, aim for the big canyon on the west face of the peak. You will likely pass some very interesting rock features along the way, but nothing difficult. Enter the canyon and scramble around and over some rocks and bushes following the main wash up. 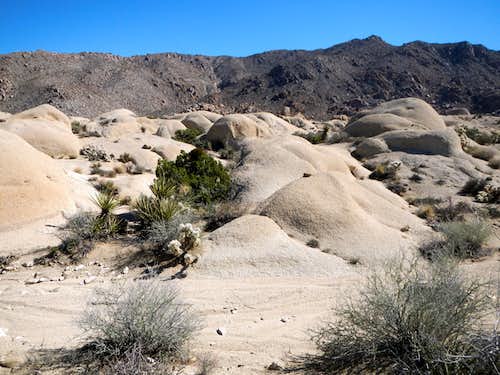 Interesting Rock Mounds
The main wash splits at 4300 feet. Most parties take the right fork, but I explored both options and found that either one will work. Continue up to the top of the draw at edge of the upper plateau and be careful of loose dirt and rocks near the top. 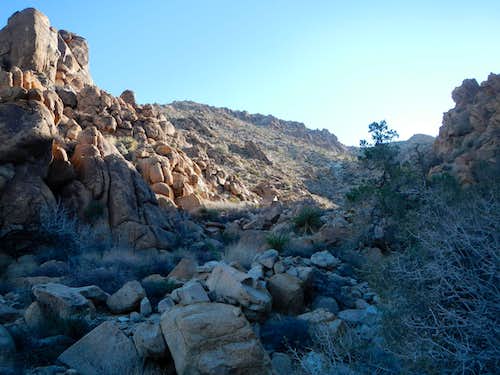 Entering The Canyon
There are some initial hills and then a valley which separate the west canyon from the highest peak. Traverse east by southeast along the south side of these small hills or go over the top of them and then traverse around the south side of Point 5040+. There might be cairns or “ducks” present to mark the route. 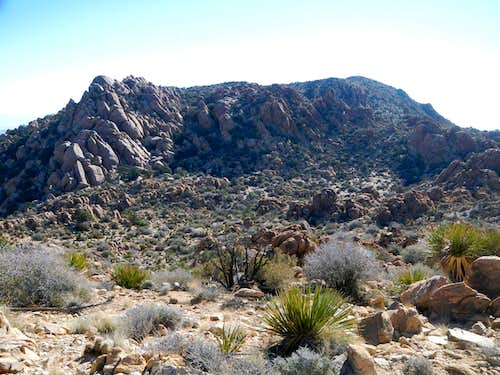 The Upper Valley And Summit Beyond
Once past (southeast of) Point 5040+, turn left (northeast) and descend through a pass 100 yards into the small valley. Then turn southeast again and ascend to a small pass located between a large group of rocks on the left and a rock pinnacle on the right. 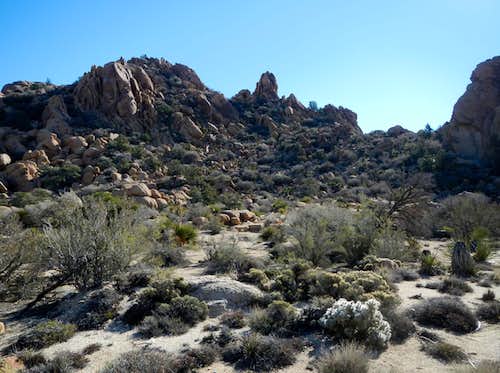 The Pass Left Of The Rock Pinnacle
From this little pass, navigate around and through some more rock formations and then you will come to the last level area before the upper west slope of the peak. Ascend this final slope to reach the summit. Cholla cactus is plentiful around the summit area. 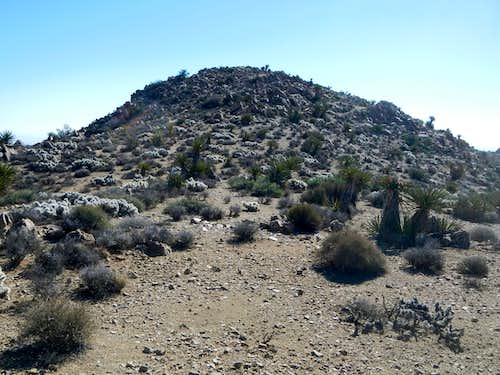 Final Slope To Summit
Views to the west of the Cottonwood, San Bernardino, and San Jacinto ranges are very good, while to the north, the Pinto Mountains, and the Hexie Mountains view prevails. South across the Chuckwalla Valley, the Orocopia Mountains are visibly shorter and to the east, the Chuckwalla Mountains and the remainder of the Eagle Mountains spread out below as well as other distant ranges. 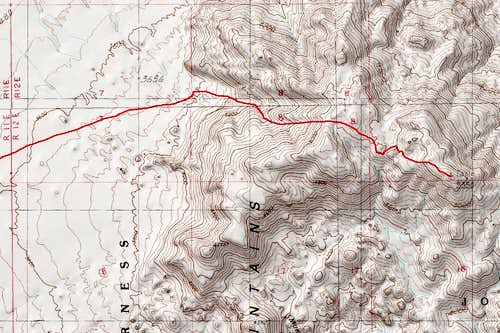 Whether coming from the east or west, take Interstate 10 to exit 168 and turn north on Cottonwood Springs Road. Continue north for 7 miles to the Cottonwood Oasis Road and turn right. Follow this road 0.7 miles to the turnoff for the campground or 1.2 miles to the end where the Mastadon access loop trail begins. 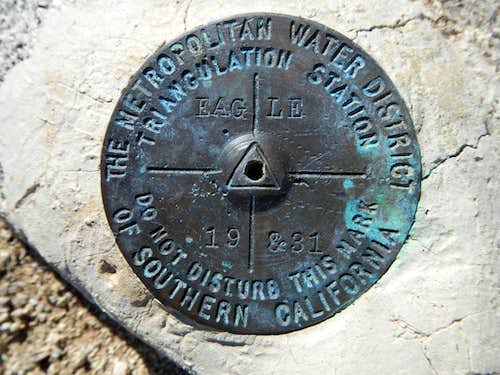 Dogs are not allowed to hike inside the park.