Diadic Point and Spectre Peak as viewed from Tensor Point
Spectre Peak is the highest point in the Coxcomb Mountains with over 2000 feet of prominence.  The Coxcombs are a north to south trending range at the far eastern edge of Joshua Tree National Park. This area was incorporated into the national park in 1994 as part of the California Desert Protection Act. Previous access roads have subsequently been gated off making approach distances much greater.  The Coxcomb Mountains are a remote region of the park not often visited by people.  Spectre Peak is also featured on the Sierra Club Desert Peak Section List, one of only 3 mountains inside the national park which are included on that list.  It is by far the toughest of the three because Pinto Mountain and Eagle Mountain are only class 2 and 3 hikes.  Spectre Peak was previously referred to as Coxcomb Peak, but it acquired it’s current name after the second ascent when climbers saw Spectre of the Brocken, a visual rainbow phenomenon occurring in cloudy conditions. 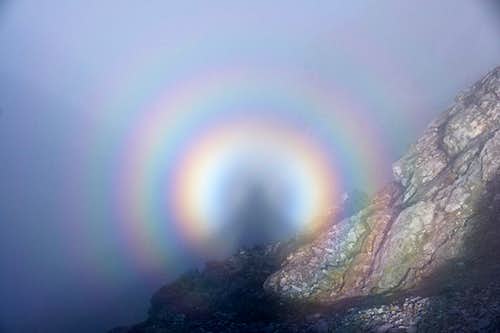 An example of Spectre of the Brocken
To say the Coxcomb and Sheephole ranges feature rugged terrain is a gross understatement. The rock formations present there are often large jumbles of monzogranite boulders with serious vertical relief. The surface of these rocks feature large sharp granules of biotite and hornblende which is great for fiction except where erosion has loosened the top layer making it crumbly. Dry waterways occasionally provide easier travel than rocky slopes or ridges, except for the presence of minor dryfalls. Bighorn sheep might be present but have been in steady decline for several decades. The animals you are most likely to encounter are chuckwalla lizards or the western speckled rattlesnake. In the spring after a rain, Acton brittlebrush decorates the lower washes. 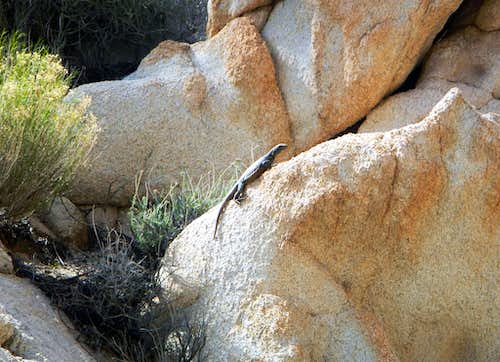 Coxcombs Chuckwalla
Spectre Peak is part of a closely adjacent trio of peaks nearly the same height. USGS maps incorrectly display Tensor Point as the highest point of the three and Spectre Peak as the lowest. This couldn’t be further from the truth. In the winter of 1952, the first recorded ascent of Spectre took place and this group decided that Spectre and Diadic were nearly equal in height. Then in March of 2006 my friends Edward Earl and Adam Helman along with Richard Carey measured the difference between the two nearly equal peaks using a 32X automatic level telescope. The eastern peak called Diadic Point is the most technical of the three and is 5 feet lower than western peak Spectre. The northern peak called Tensor Point is the easiest of the three and is about 63 feet lower than Spectre Peak. Tensor is often referred to as “Aqua” in photos and trip reports because it has a benchmark on the summit labeled as “Aqua”. 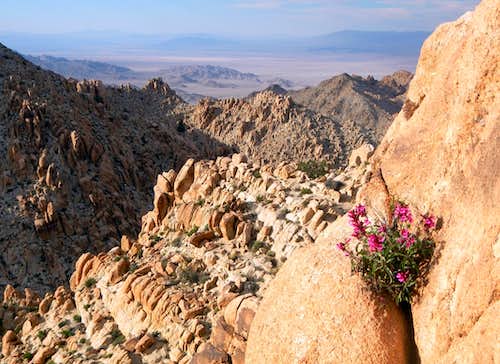 Beautifully Rugged Terrain
So what exactly do Spectre, Tensor and Diadic mean collectively? This terminology could be a reference to multilinear algebra. Diadic Notation was created by Josiah Willard Gibbs in 1884 and is used in continuum mechanics and electromagnetism. Here is an example of a Tensor field.

Perhaps more relevant are the secondary meanings of these words. A spectre is “something widely feared as a possibly unpleasant or dangerous occurrence”, “something that haunts or perturbs the mind” or a “ghost, phantom, or apparition”. Diadic means “to underwhelm or fail to impress or stimulate”. Surely this is a cruel joke since Diadic is the toughest of the 3 peaks, rated at class 4 to 5.4 depending on which guide book or trip report you consult. A tensor can be “any muscle that makes part of the body firm or stretched” or more simply, “a stretcher”.
Climbing Spectre Peak in a day is a huge undertaking. Make sure you start before dawn. Most parties will prefer to camp somewhere for a more pleasant 2 day trip. Doing all three peaks in a day borders on super-human. Special considerations include sturdy footwear, optional scramble gloves, and plenty of water. Never attempt these peaks from May to September when heat rises to dangerous levels. If you want to climb Diadic Point be sure to study Bob Burds trip report (link below) and perhaps consider bringing a rope. 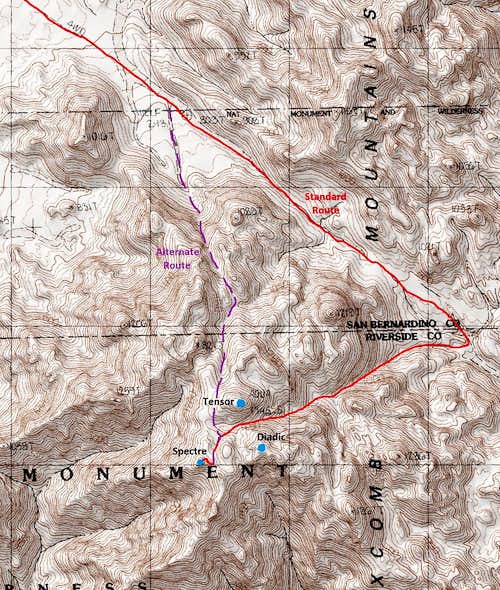 This route is roughly 14 miles and 3800 feet of gain, round-trip.  From the small parking area, Follow the old road across open desert in a winding southern direction for roughly 4 miles until it enters a wash. Continue up the wash in the southeast direction. 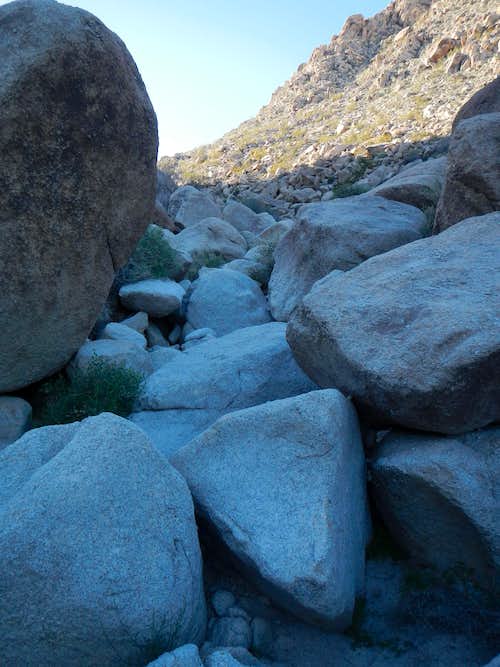 Boulder Choked Wash
The wash narrows and becomes a canyon choked with boulders and small bushes. Some scrambling might be required to get over around the boulders. 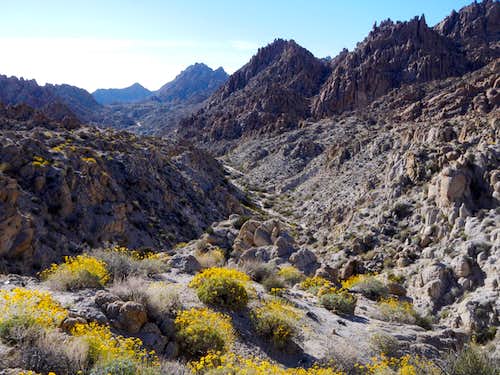 A View East From The Pass
Continue for another mile to a pass at 2980 feet, northeast of the peaks. Continue over the pass and drop down into the next wash. 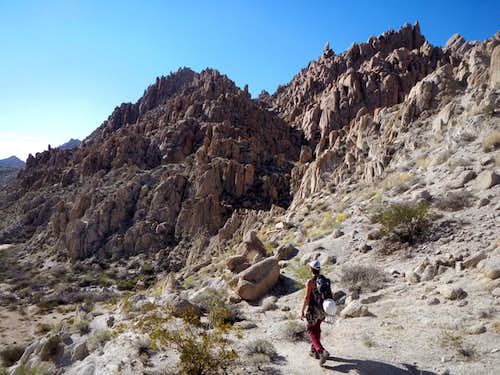 Canyon Entrance To The Right
A half mile below the pass a large side canyon opens up on the right (southwest). Good camping can be found nearby the entrance of this canyon. 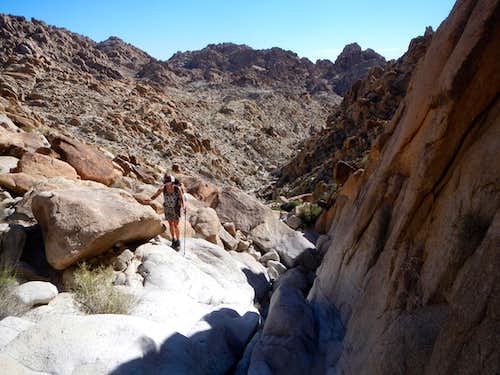 Ascending The Canyon
Enter the canyon and continue up, gaining 1150 feet until you come to the small valley between all three peaks, located at 4100 feet. 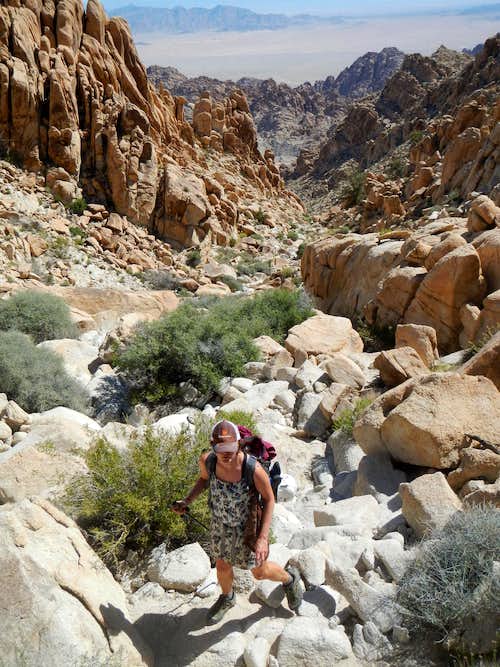 Near The Top of The Canyon
Along the way you will encounter all sorts of difficult obstructions and jumbles of rocks, small dryfalls, and slabs. Be prepared for a lot of class 3 scrambling without much exposure. 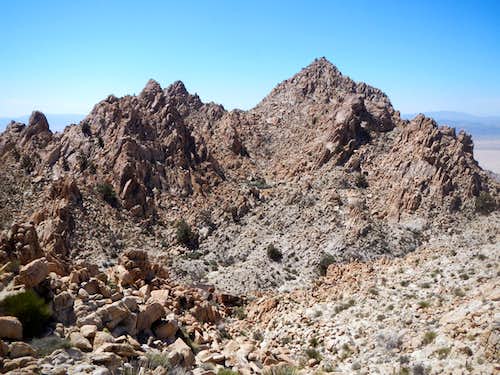 Spectre Viewed From Tensor
Once in the upper small valley you will come to a giant boulder which offers some good shade for a rest. Beyond the giant boulder you will see Spectre.  Turn slightly left and scramble up to the base of Spectre. 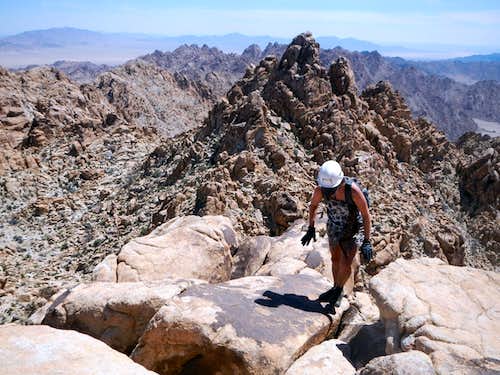 High On The East Ridge of Spectre
Spectre can be climbed by its east ridge, northeast face, or some combination of the two. 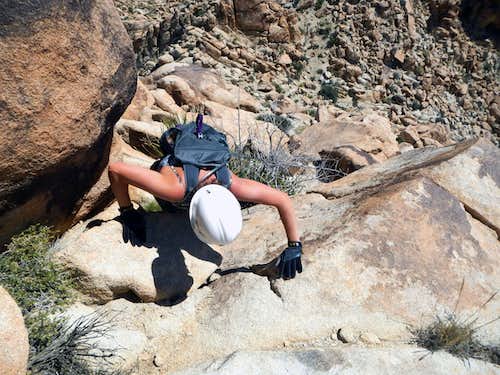 A Class 4 Move
The climbing is mostly class 3 with the potential for a few class 4 moves. There was a register present in April of 2015.


Note: An alternate more direct approach can be made by climbing the north canyon and coming over the west shoulder of Tensor (see route map). This alternate route might be quicker, but is rumored to be more difficult and more exposed.

Getting There – Driving Directions