From the north, a few trails (TH's at: Liptovský Jan, Liptovská Porúbka and Mihalovo) converge at a place called Brtkovica, which is both a vast clearing and a little hamlet of several shepherd huts and little cottages, some of which have been converted into vacation homes or chalets for rent. From Brtkovica, a steep ascent through the forested slopes of Slemä (1514m, part of its limestone cliffs shows up) takes you to its, still densely wooded, summit. Slemä can be considered the north summit of the Ohnište-Slemä Massif. On the way, there's a shelter which was used by Slovak resistance fighters during World War II and at the very top of Slemä lies the wreck of a Russian plane that crashed into the mountain at that time. Having climbed Slemä, the trail winds its way through coniferous forest down to Michalovské sedlo (sedlo = saddle) and Zadná poľana (Rear Clearing). If you're running out of water, there is a spring near there. Until recently it wasn't easy to find (please click the photo of the spring for directions), but now (2017) an arrow fixed to a wooden post shows the way. The green trail continues gently upwards, across the lush meadow, then again through the forest with the first glimpses of Okno, and finally it reaches the edge of another clearing, which is called Prednápoľana (Front Clearing). Here the green trail forks. Now you'll have to make a little round-trip: Take the right turn and follow the path, which turns a bit muddy and runs over plenty of tree roots and some fallen trees. In about twenty minutes, the path will bring you to the summit of Ohnište, where you should find a log book in a metal case on the summit post.

After returning to the green trail junction at Predná poľana, the other green thread will take you to Svidovské sedlo, over a fairly steep, forested drop (a bit of easy scrambling for those heading in the opposite direction), which is an extension of the bluff below the summit of Ohnište, although it is not a cliff any more. Svidovské sedlo is a pass where marked trails from all four corners of the world intersect. You'll cross a rivulet just before reaching the saddle. If you are in a hurry heading towards Liptovský Jan, look out so as not to walk along the road, which is also a marked bike trail – to make a short cut, follow the blue and yellow marks down across the meadow, and later on along the brook. Access to Svidovské sedlo from the:

The summit of Ohnište provides an excellent panorama of the crown of the Lower Tatras, over 2,000m in elevation, the rugged Ďumbier drawing most attention. Below a characteristic limestone bluff, a narrow, unmarked path can be seen that leads to the aforementioned rock arch, which is called Okno, i.e. the Window. From the main summit marker a well-trodden path leads to a no entry sign (please see Red Tape), then to a narrower section of the ridge and a little col, where the path to Okno descends to the left to soon land on the section of the route visible from the viewpoint at the summit marker. The narrow path is easy under dry conditions but – given considerable exposure - turns dangerous if icy or covered in snow. A few hundred metres further on there's the trickiest point – a class 3 (YDS) step, about 5m in height: take care – it's slippery, especially when wet; if there is snow, you'd better turn back. Continue down the path and the Window will show quite unexpectedly on your left. This is a beautiful vantage point: the massif of Ďumbier before you towards SW and through the Window you can see the realm of the karst cliffs of Slemä and wild, forested canyons down below. The Window itself does look impressive. Depending how you count it is 10 to 20m tall. 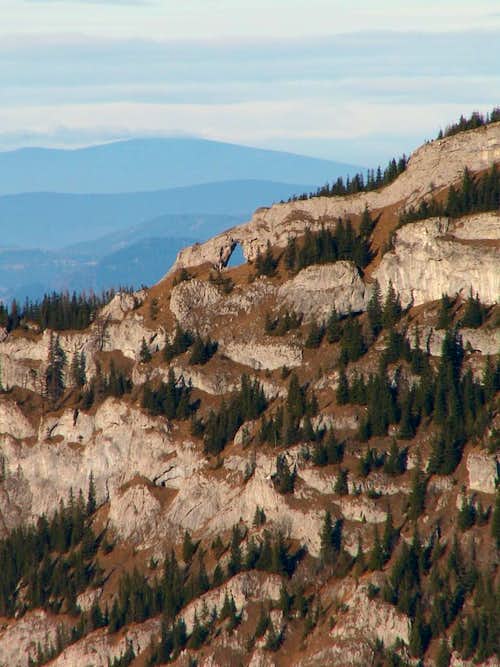 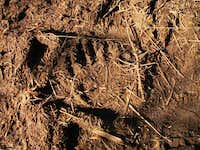 Most of the area is covered by fabulous, dense woodland. A range of rare mammals live here, from the big brown bear (Ursus arctos arctos) to the tiny northern birch mouse. Quite a few bears inhabit the area and can be run into when least expected. Recently (Sep 2011) I was lucky to see a mama bear and her two cubs dash, obviously frightened, across the road within the boundaries of the resort of Liptovský Ján. On the same day I had seen another bear at the edge of a clearing on the side of the valley facing the Slemä-Ohnište Massif. (More about the bears and whether they can make trouble: here.) Several years before, while we were on the trail to Ohnište for the first time, we spotted a northern birch mouse - we almost treaded on it - scrambling in the same direction on the slopes of Slemä. In between, there are mid-sized species. Once at the bridge across the River Belá, just outside the town of Liptovský Hrádok and ten minutes' walk from the campsite, strange cries, which I thought were birds', caught our ears. To our amazement, it turned out to be two otters playing all across the stream, only the trout, being used as a snack, didn't enjoy the scene whatsoever. 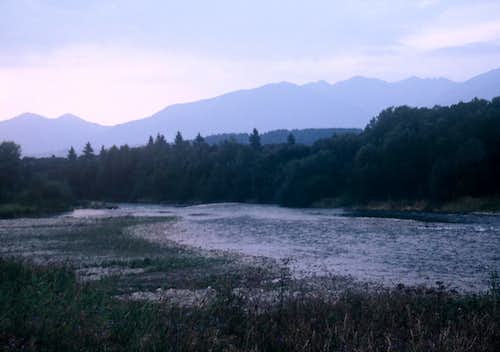