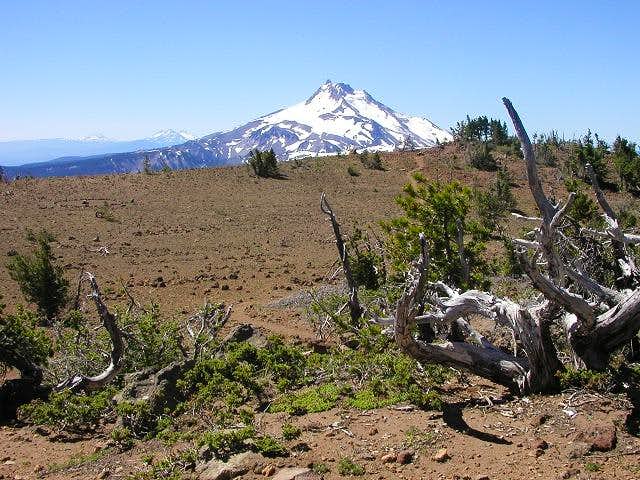 Olallie Butte is the third highest peak in northwest Oregon. It stands between Mount Hood and Mount Jefferson and is surrounded by numerous lakes. It gets overshadowed alot by the surrounding peaks but still is a predominant point in the area. In fact, it is the most prominent peak in Marion County at 2255 feet of prominence, almost twice its nearest competitor. It has a trail to its summit where there is an old lookout (or what is left of it) that was abandoned in 1967. To the north and south of Olallie Butte are the peaks of the Cascade Range. To the east is the high desert of Oregon and to the west is the Willamette Valley. 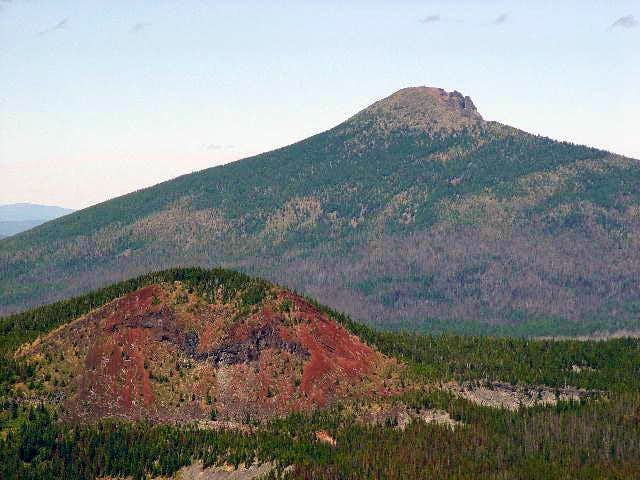 From Portland, take Interstate 205 to exit 12 near Oregon City. Follow signs east 18 miles to Estacada. Go through town and keep going about 26 miles on Highway 224 to the bridge at Ripplebrook. Go straight on paved road 46 for 21.8 miles to a large junction where there is a sign for Olallie Lake. Turn left here onto Road 4690. Go 8.1 miles to a stop sign and turn right onto gravel road 4220. Go 2.7 miles and park under the third set of powerlines. The trail starts on the left side of the road and is unmarked.

The first third of the trail is on public land. The last two thirds, including the summit, are on the Warm Springs Indian Reservation. The Reservation wants to discourage hiking so they tore down the trailhead marker. Officially, you can only hike onto Reservation land if you are hiking to a lake for the purpose of fishing. Therefore, you are required to purchase a fishing permit from them. But, there are no lakes on the butte. However, since they tore down the trailhead marker, there have been no fines to hikers and lots of hikers have gone at their own risk.

When I called the Reservation to find out about restrictions, they told me there was a wildfire going and all trails and roads were closed. When I subsequently called the Estacada Ranger District, they said the fire had been out for a month and all trails and roads were fine - so, you can see the problems you run into. It appears the Reservation doesn't really want hikers but they are not doing much to prevent it.

You need a Northwest Forest Pass to park at the missing trailhead marker.

Best times are July to mid-October (or when snow does not close the roads).

Camping is permitted at least on the public part of the trail. Camping is strictly prohibited on Reservation lands.

There are numerous campsites around the lakes nearby. The Paul Dennis and Peninsula campgrounds on Olallie Lake are the closest. Call the Ranger District listed below for information.

I would suggest calling the Estacada Ranger District at 503-630-6861 as they give more reliable information.

Technically, the summit lies within the Warm Springs Indian Reservation and their Natural Resource Department is 541-553-2000. (see link above for their website)