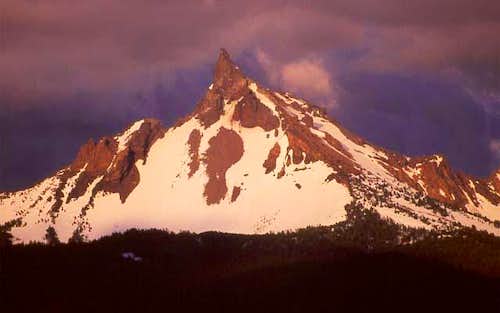 Thielsen from the west

Mount Thielsen is a dramatic horn-shaped peak located in the Southern Oregon Cascades just north of Crater Lake. The peak rises abruptly from its surroundings to a very distinct spire. Its north and east faces are most impressive, towering 2200 feet upward in a near vertical fashion. Due to its dramatic spire shape, its dominance among other peaks in the region and the unstable weather this region receives Mount Thielsen is said to be struck by lightning more often than any other High Cascade peak, earning it the nickname the lightning rod of the Cascades.

This is the reigning peak in this part of the Cascades, there is no summit in the range higher until you reach the South Sister to the north and Mount McLoughlin to the south. Situated on the east side of Diamond Lake, it is directly opposite Mount Bailey, which offers sno-cat skiing and snowboarding in the winter. It is just south of Howlock Mountain, another rugged peak that is the third highest summit in the Diamond Lake area.

Despite its intimidating appearance, a climb of Mount Thielsen is a relatively straightforward undertaking. The West Ridge is an exhilarating route, not quite technical but with enough exposure to get the adrenaline pumping. The true summit is a spectacular spire sticking impressively upward into the sky. Standing on the summit, the land seems to drop off thousands of feet in almost every direction, giving the same feeling as if hovering high above the dense forests of the Oregon Cascades. Views are expansive in every direction, on a clear day Mount Shasta is visible to the south and the Three sisters are visible to the north. The summit of Mount Thielsen is also the only place outside of Crater lake National Park where the waters of Crater Lake are visible.

Geology:
Mount Thielsen is the eroded remnant of a shield volcano. Having gone extinct 290,000 years ago, multiple episodes of glaciation have stripped much of the rock from the mountain's lower reaches. Erosion has wiped out any trace of a summit crater. The mountain's jagged spire is all that remains of the volcano's central plug. The plug is composed of basaltic andesite, while the lower slopes are composed of pumice and volcanic breccia.

The forests on the mountain's lower slopes are typical of drier climates, despite the region's moist climate. This is due to the porous nature of the volcanic ash in the soils. Much of the rock present on the mountain today is volcanic ash from the cataclysmic eruption of Mount Mazama. This ash layer ranges from 12 to 60 feet deep, thick enough to deprive the region's trees of significant water.

Thielsen's summit pinnacle is home to numerous lightning caused scars called fulgurites. These scars consist of small specs of obsidian-like glass on the summit rocks. Some of the more defined fulgurites appear as glass tubes that splinter and branch outward.

Mount Thielsen is also home to Oregon's southernmost glacier, the Lathrop glacier. It occupies a small cirque at the base of the mountain's massive north face, an area that sees little sunlight.

More information about the mountain's geology can be found at this link. 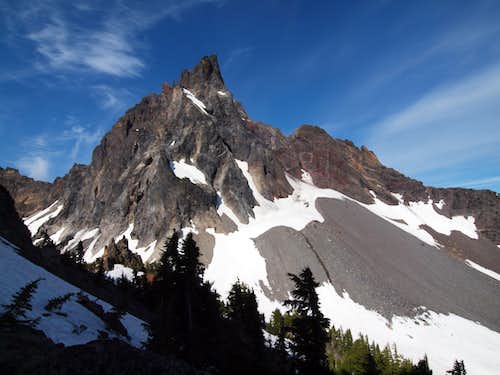 History:
Originally Mount Thielsen was informally named Big Cowhorn. It was one of two “cowhorn” peaks in the area along with Little Cowhorn, both peaks were capped with dramatic spires that resembled the horns of a cow. Later on the names faded away. In 1872 the peak was officially named Mount Thielsen by John A. Hulburt of Portland in honor of Hans Thielsen, a prominent railroad engineer and builder. In 1911 a storm blew the pinnacle off Little Cowhorn, and today Little Cowhorn is known as Cowhorn Mountain.

The first recorded ascent of Mount Thielsen was done by Ensign E Hayden in 1883. Hayden was a member of a USGS team studying the mountains of the Cascade Range.

In 1968 a daring first ascent of the peaks northeast ridge was performed by Tom and Bob Bauman and Gary Kirk. The route was named the McLaughlin Memorial route after Mark McLaughlin, a friend of theirs who died on Denali. 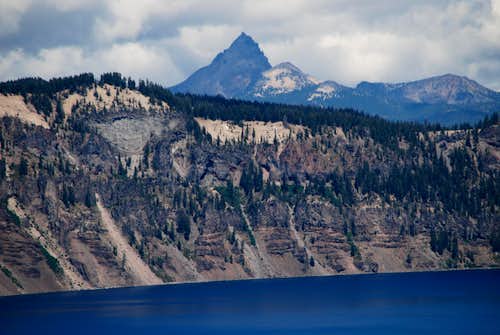 From Roseburg: Head east on Highway 138 for 79 miles to the signed Mount Thielsen trailhead. If you wish to approach from the Thielsen Creek Drainage, turn 3 miles earlier on the Diamond Lake Loop road. Head .3 miles south and turn on corral road to reach the trailhead.

Most people climb Mount Thielsen by the standard Mount Thielsen Trail. This option is best for a short, straightforward day trip. In addition to the standard approach I've chosen to document a longer, but highly scenic approach through the Thielsen Creek drainage. Both of these approaches are shown on the map bellow. Both options involve roughly 3800 feet of elevation gain. (Note: both approaches listed here are for the standard West Ridge route.) If climbing Thielsen as part of a longer backpacking trip there are numerous other approaches, too many to list here. The Northern reaches of the Mount Thielsen Wilderness are highly scenic and worthy of a visit. 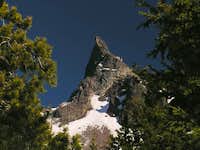 Mount Thielsen Trail: 4 miles to the junction with the PCT and the start of the West Ridge route. 5 miles to the summit.

As the name implies, this is the standard approach for Mount Thielsen. The trail begins at the Mount Thielsen Trailhead, and gradually climbs to the junction with the PCT, and the start of the use trail up the West Ridge. A section of the trail was recently re-routed to bypass a massive blow-down. No water is available. 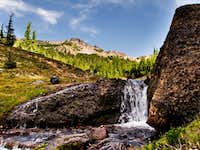 The West Ridge route finishes on a ledge (sometimes called Chicken Ledge for obvious reasons) at the base of the 80 foot summit pinnacle. Ratings for the pinnacle range from class 3 to low 5th depending on the individual and the exact variation of the route, however a class 4 rating seems to be the most common.
The easiest route begins on the far right side of the pinnacle in a short chimney. Alternatively one can begin on the rightmost spine of the pinnacle, this option has better holds, but a fall here would result in a non stop ride to the Lathrop Glacier (in fact, at the time of writing this page, the most recent fatality on this peak came when a gust of wind knocked someone off this route).
From here the route trends left through a series of ledges. Key hand holds have been polished by the many other climbers that came through, when in doubt, look for these to tell if you're on route. The climbing gets easier higher up, the last few moves are less exposed.
Compared to the rest of the mountain the rock quality on the pinnacle is quite solid. Still this is the Oregon Cascades and caution should be exercised. All holds should be thoroughly tested.
It seems the majority of people who attempt Thielsen do not even attempt the pinnacle. Most seem content to make it to chicken ledge. Most that do climb the pinnacle do not protect it, this is however a matter of personal comfort, and a fall here would not end well.

This section of the Oregon Cascades sits in a transition zone between the drier Southern Cascades and the more lush Western Cascades. As a result this area receives weather that is abnormal for the Oregon Cascades. Thunderstorms occur regularly during the summer months, rarely will an afternoon go by without seeing some type of activity.
Thielsen is by far the highest object in this area. If you see thunderheads beginning to build, descend immediately. This peak lives up to its nickname The Lighning Rod of the Cascades.
An up to date forecast can be found here.
The closest webcam for the mountain is the highway 138 webcam located at the junction of highway 138 and 230. The mountain itself is not visable.
The best live view webcam of the mountain is from the Sinnott Memorial Overlook on the Crater Lake rim. A less clear view of the mountain can be had from the Crater Lake Webcam.

Thielsen engulfed by a thunderstorm 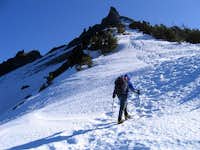 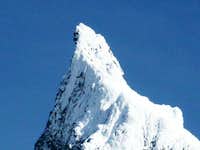 Thielsen's spire in winter
Most people climb Thielsen during the summer months, from July to October. Winter climbing is certainly possible, however the summit pinnacle would be much more challenging when covered in snow and ice. The road to the trailhead is plowed in winter and the trail is marked with blue reflectors. To get an idea of the difficulties a winter climb would entail see this trip report
The lower portions of the mountain offer some decent back-county skiing. See this website for details. 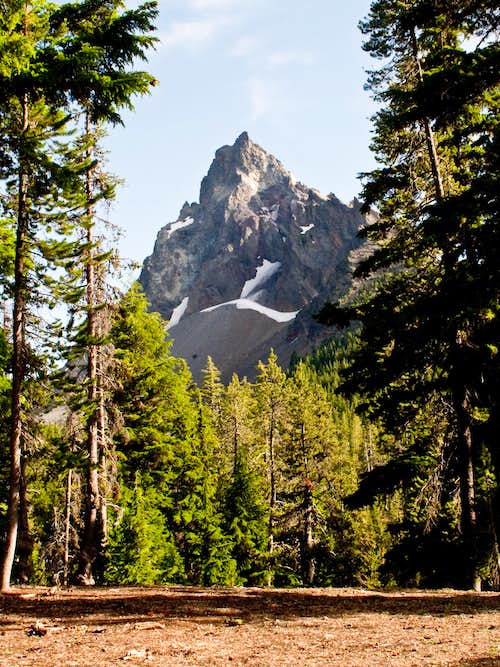 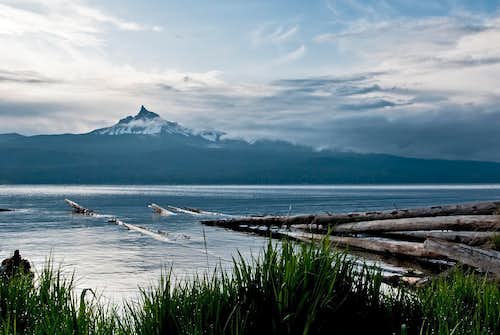