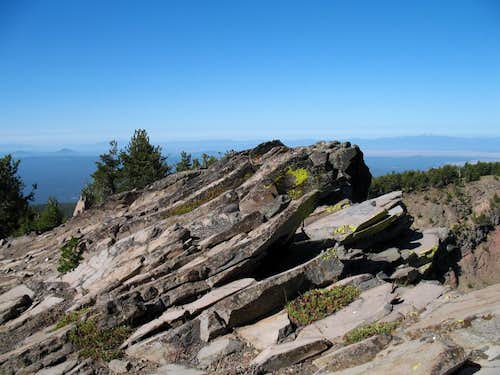 Yamsay Mountain is located east of the Cascades by about forty miles and is relatively unknown, even to Oregonians. Overshadowed by Mount Scott, Mount Thielsen and the Crater Lake area, Yamsay is hard to identify even if you are looking right at it. It is a Rodney Dangerfield kind of mountain, it really doesn't get any respect.

A lookout once adorned its top and kept watch on the surrounding countryside but it has been long since dismantled. Only concrete abutments and zillions of nails remain to identify that this was once one of the proud firewatchers
that once dotted the land. A Benchmark that marked the summit is also gone although two witness markers remain to indicate where it once was.

Information is sparse on the lookout but what I can glean from Ray Kreseks book, "Fire Lookouts of the Northwest" indicates that an 80 foot steel tower was built atop Yamsay Mtn in 1929 and dismantled in 1961. Hopefully, I can find more about the lookout in the near future.

Yamsay Mountain is one of Oregon's highest peaks, coming in at number 73 on the Mazama list. It is also ranked number 14 on the Oregon prominence list
thanks to its 3181 feet of prominence. Want to know what prominence is all about? Click HERE for more details.

Yamsay Mountain is a shield volcano (explained here) and the cliff rimmed crater was formed by ice, not fire. An ice age glacier created the craterlike cirque that is seen once you attain the summit. You have to look hard to imagine all of this since the majority of the existing crater is now covered in forest.

Yamsay is a Klamath Indian word (from Yamsi) that means " the North Wind".
Not much is known about this mountain as far as the literature goes and only one book that I know of has any information on Yamsay Mountain at all,
"Exploring Oregon's Wild Areas" by William Sullivan. The Yamsay Mountain information can be found on pages
302-04

The fun part is getting to this mountain. Located roughly 90 miles south of Bend and 75 miles north of Klamath Falls Oregon, you have to do your homework, or mapwork to find your way to the western trailhead. Take U.S. highway 97 to the Silver Lake junction and Oregon highway 76 and turn east. Pass by the Klamath Forest National Wildlife Refuge and watch for the turn for Forest Service Road 49 which is between mileposts 21 and 22. A sign for Jackson Creek campground is also located at the turnoff. 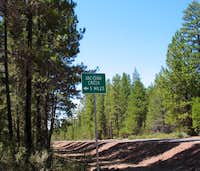 Turn east on this road and pass the Jackson Creek Campground road and continue on to a road (FS 4972) on the left (4.6 miles from highway 76). Actually, once you pass the Jackson Creek CG, , continue south on FR 49 for 0.3 miles, and turn left onto FR 4972. Go 1.4 miles and make a left turn onto FR 4973, signed “MARSH VIEW TRAIL” AND “YAMSAY MOUNTAIN” Pass the “SHORT CUT TRAIL” on the right about 0.1 mile into 4973, following a couple of additional signs to “YAMSAY”. The road reaches a fork going straight ahead (light use) or hard right; bear to the right. After this turn, the road becomes increasingly overgrown to the sides which can scratch up your nice paint job (take a friends vehicle). The trailhead is about 5.5 miles from the Jackson Creek Campground entrance. It has room for several vehicles where you park for the beginning of the hike.  Don't drive these roads in muddy conditions.

Recently, SP member Ken Hirschberg, a ham radio operator, took his ham radio (a small unit) with him to the summit of Yamsay and "activated" the mountain for other ham radio operators looking to make contact with him via the SOTA (summits on the air) group.  He has made a nice trip report which also includes up to date directions to get to the trailhead which is worth the read and might improve on what I've detailed above since it is 2015 information.  Check out Ken's SOTA report here.

No red tape that I am aware of and Yamsay Mountain is located in the Winema National Forest.

Also, information could most likely be obtained from the
Chiloquin Ranger Station or Chemult Ranger Stations, located off of highway
97.

Jackson Creek Campground has 11 or 12 spaces and vault toilets. The campground is pleasant and shaded and there was room enough for a trailer or motorhome or two. Tables and firepits were provided and there was no fee for camping there. On a labor day weekend, I saw only three other campsites being utilized. Jackson Creek is a nice stream and water can be taken from it although I would filter it before useage.

Other camping or lodging possibilities could be found near Crater Lake or off of highway 97. It would be possible to car camp at the western trailhead.


External Links and odds and ends

The Klamath Marsh National Wildlife Refuge is on the way (from US 97)to Yamsay Mountain. Take the time to read this link to find out more. Also this ONE.

Find out about another prominence peak, Bald Mountain by clicking HERE.
Bald Mtn ranks #41 on the Oregon Prominence peak list. An active lookout sits atop it and you are cautioned to stay off of the lookout itself as the current lookout has been hostile to those who climb up the stairs.

It is reported that the Yamsay area gets 40 inches of precipitation a year and you can expect snow to cover the area from November on. Thunderstorms are common during the summer and falls are generally pleasant but an active area for hunters to be. Wear orange in the fall and be aware that Jackson Creek Campground may be fully occupied during the hunting season.

I have put up a route from the west but my understanding is that there is also a route that the forest service favors from the east. William Sullivan mentions this route in his fine book, "Exploring Oregon's Wild Areas" and he calls this route the Fremont Trail. It is almost 17 miles long. Nuff said.
I hope someone who has experience with this trail might add it as a route to the Yamsay page but since I only have experience with the western route, I will leave it at that. 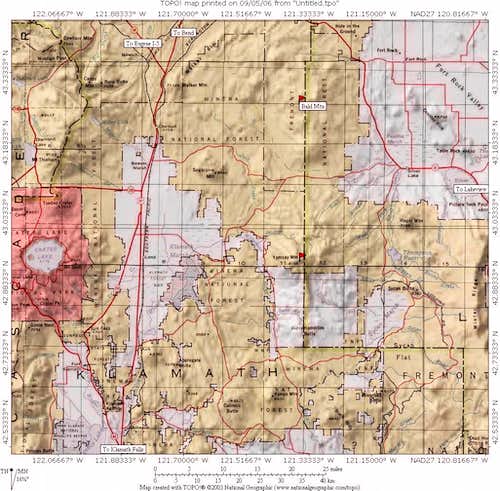 Road To the Trailhead Is Difficult For 2WD

Not really a correction, just a note regarding the last 3.8 miles of the drive to the trailhead as described on the main page: I only made it about two miles up this road before the ruts and such made it impossible to get any further in my 2WD car. Luckily, there was a little pull-out area and I parked there. This added about 3.5 miles round-trip to the hike, but it was no big deal. Just a heads-up that if you don't have a 4WD and high-clearance vehicle, you likely won't be able to make it all the way up this road, even in the summer, so plan for a few more miles of hiking.