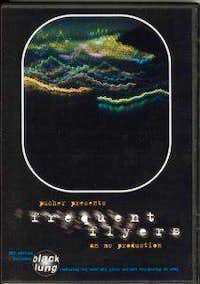 
Three around the world tickets, minimal gear, and a quest: to find the perfect boulder problem. Boone Speed and Obe Carrion travel to the Southeast U.S., the gritstone of England, the legendary Fontainbleau, Australia, the unknown of New Zealand, and finally the mystery of Japan. The "Endless Summer" of climbing.

"The technical aspects of the film were flawless. Great camera work, editing and music, plus occasional interviews, street scenes, and roadtrip wackiness, combined to bring the worldwide bouldering scene together and make Frequent Flyers more than just the typical climbing video."
- Climbing Magazine

"The video begins with the question, 'Is there such a thing as a perfect boulder problem?' In the hour of globe-trotting action, Boone Speed and Obe Carrion seek the answer. Much of the footage is like nothing you've ever seen in a climbing video"
- Rock & Ice Magazine

Not bad...
This film was interesting to watch. It followed two excellent climbers who both excel at bouldering. Their chaotic adventures around the world delivered a vast array of boulder problems in exotic places in far off lands. There was also cool footage of local climbing areas in the Midwest and Eastern part of the U.S. A fun watch guaranteed. I would recommend it.