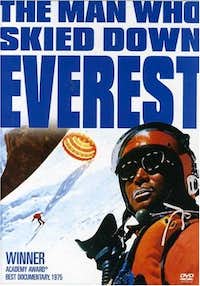 This incredible, award-winning film features adventurer, poet and world-champion skier Yuichiro Miura as he and his team face the most challenging climb in the world, Mt. Everest. The ascent is fraught with tragedy, the descent miraculous. During the climb, they face an icefall that claims the lives of six of their team, still considered the worst natural disaster accident in Himalayan history. With a 35mm Panavision film crew in tow, they continue on to the South Col, only 350 meters from the summit, where Miura put his life in the hands of the gods in his descent. Using oxygen and a parachute to slow his speed, Miura skied 7,000 feet over sheer ice and rocks. Unbalanced by the gusting winds, he hit a boulder and fell 1,320 feet, smashing into rocks and ice ridges. A patch of snow was all that saved him, allowing his fall to end just moments away from the Bergshrund Crevasse. This final climax has been called the most exciting six minutes of film ever shot as Miura plummets helplessly down Everest's unforgiving icy slopes toward certain death.

Nice film
I really enjoyed this film and it is one of the most intense mountaineering films I have ever seen. I highly recommend it to anyone who enjoys the mountains.