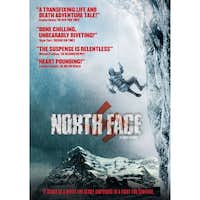 North Face is a men vs. mountain adventure so harrowing and gripping that, as with the doomed sailors in Das Boot, one almost forgets that the bruised, battered, and frostbitten climbers we're urging onward are Nazis. Toni Kurz (Benno Fürmann) and Andi Hinterstoisser (Florian Lukas) are cocky mountaineers who "will scale anything that's tall." In 1936 they are prevailed upon to climb the unconquered 13,000-foot north face of the Eiger, "the death wall" and "the last problem of the Alps," as a heroic and glorious prelude to the Berlin Olympic Games. Toni and Andi are not true believers (they ignore greetings of "Heil Hitler" as they quit the Bavarian Mountain Brigade). They've got company on their treacherous quest, two Austrian climbers. As long as North Face sticks to the mountain, it is viscerally thrilling and grueling. But the movie adds unnecessary baggage, a romantic subplot. Why is there a love story? Because it's there. Johanna Wokalek costars as Luise, an aspiring photojournalist and Toni's former girlfriend, who is covering the story with her boss, a Nazi sympathizer whose paper is a cog in the propaganda machine. Based on a true story, North Face has a you-are-there immediacy and authenticity (the cinematography was honored with Germany's equivalent of the Academy Award) that transcends any dramatic missteps. --Donald Liebenson

Based on a true story, North Face is a suspenseful adventure film about a competition to climb the most dangerous rock face in the Alps. Set in 1936, as Nazi propaganda urges the nation s Alpinists to conquer the unclimbed north face of the Swiss massif the Eiger two reluctant German climbers begin their daring ascent.

Great Film!
I enjoyed this so much I bought it on blue-ray. The picture is excellent, and the story is very intriguing. It also has a little romance thrown in there to add to the drama. I highly recommend it to anyone!