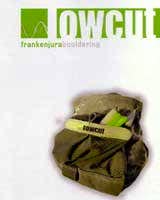 From the start this is clearly a slick production, with great use of black and white, creative effects, and a strong emphasis on the accompanying dance soundtrack. This film certainly has a strong identity. The film follows some of the top local climbing in Germany’s infamous Frankenjura. It mixes in stills photography and rostrum shots to give a bit of historical coverage. The film mixes climbing footage with well thought-out cutaways to maintain interest, and is clearly well filmed and produced.

The dialogue, in German, is subtitled via a "narration sheet", and proves a surprisingly humorous commentary.

The film certainly sells the Frankenjura as a bouldering destination – the problems look excellent, not to mention hard. On that latter point, there’s no much in this film that isn’t bloody-hard (not much under font 8a) but there aren’t that many bouldering videos where such a large quantity of high level problems get completed.

In summary, a sharp, interesting film which might just be enough to make the truly dedicated want to make a trip to somewhere other than Font.

good footage
This film is all in German (At least the one I saw) and shows a great deal of good climbing. It shows some history too which is fun to see. You can compare the climbs that were done in the past along with the ones being done now and it was a good contrast.