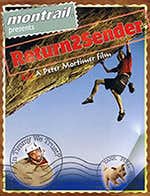 The creators of the multi-award winning Front Range Freaks are back, this time featuring mind-blowing climbing antics from around the globe. Renowned freak and urban ape Timmy O'Neill leads the adventures in a 90-minute documentary that chronicles cutting-edge exploits in the vertical world.

Alison Osius, Rock and Ice Magazine –“This is one of the best climbing films ever made, and for reasons that go beyond the climbing. O’Neill’s antics throughout pull it all together. Mortimer’s editing and direction provide terrific changing perspectives, and the ultimate insider’s point of view. R2S made me want to go climbing.”

Mike Brooks, FrontRangeBouldering.com – "...some of the greatest, most gripping climbing footage I have ever seen... The routes climbed were so wickedly bold and gnarly that I actually found watching the footage to be physically stressful. I was genuinely scared at times. Mortimer is brilliant at placing the viewer right up close and personal on sick routes..."

Great!
Parellelojams was amazing! I've seen it twice now, without being at all bored.

Annoying
Never quite got thru. that segment on that little brat bouldering - somehow it is able to annoy and bore the shit out of me all at the same time!

Rest of it is very good, esp. the parallelojams part. Though I was disappointed to see that they did not do Liquid Sky on the roped climb of N6shooter.

Awesome!
This movie was great, I loved the parallelojams segment. This movie also inspired me to start slacklining. The kid and the prego chick were really annoying, other then that the movie rocks.