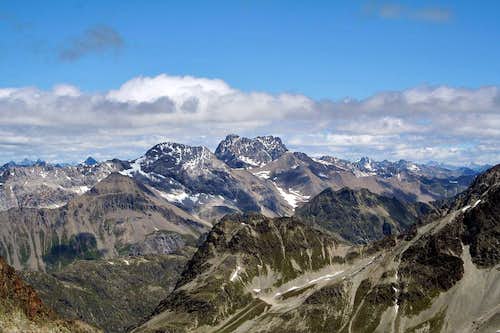 Piz Kesch is a castle.
Both from the north and from the south the Piz Kesch is a mighty broad 'castle'. It is located in the Albula alps north of the river Inn in the Engadin region in the eastern Swiss province of Graubünden. Actually the mountain has three summits that are of similar height all connected by a narrow ridge. The highest (3418m) is the western summit. A few hundred meters to the southeast you will find the central summit (3405m), which is only a small hump in the ridge. To the east is the lowest but most spectacular eastern summit which is also known as the Keschnadel (Keschneedle, 3386m). To the south the face is mostly rock, while to the north there is a small glacier up to a couple of hundred meters below the main ridge.

The Piz Kesch towers almost 200 meters over any other mountain in the vicinity. The only other mountain above 3400 meters north of the river Inn is the Piz Linard (3411m) to the east in the Silvretta group. Southwest across the Engadin however, you will find the famous Bernina group. I believe this is the main reason why the Piz Kesch is not so well-known. In many other areas it would be very popular. But this makes the mountain all the more interesting for climbers. Though the mountain is not extremely quiet, you will not easily find a mountain this high above its neighbours and this imposing without a crowd.

The Piz Kesch is not only the highest point in the Albula alps, but also the most interesting for mountaineers. The normal route on the mountain is a nice, relatively short, climb for novice mountaineers, while there is a very interesting route for more experienced climbers (IV) on the Keschnadel.

The mountain can be climbed from the north or the south.

From the south you can take the train to the village of Madulain or Zuoz in the Engadin (near to the town of Sankt Moritz). From there you can walk up to the Camanna d'Es-cha (Es-cha hut) in 2-2,5 hours.

From the north it is harder to reach the mountain. You can travel to the town Davos by train and from there find a bus or taxi to the village of Sertig (1859m). From there you can cross the Sertigpass (2739m) and walk down to the Chamanna digl Kesch (Kesch hut). This will take about 3,5 hours.

You can reach the Es-cha hut in a mere 1,5 hours from a parking space at about 2200m on the side of the road between the Engadin en the Albula pass (val d'Alvra). In winter if the pass is closed you can walk up from Zuoz or Madulain.

To reach the Kesch hut either go to Sertig near Davos or drive from the Albula pass route in the Tuors valley to the village of chants (1822m) and walk directly to the hut in about 2 hours.

All routes to the huts are fairly easy walks in nice scenery. 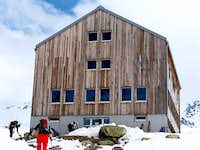 The modern hut on the north: Keschhütte.
As mentioned before there are two easy to reach huts near the mountain. All routes can be climbed from both huts.

One of my personal favourite huts is to the south of the mountain, the Chamanna d'Es-cha (2594m). As opposed to the Kesch hut this one is an oldfashioned small hut. When I was there the guardian was very friendly and could give us some extra information on the route. For more information Es Cha or call 081 854 17 55 when the hut is open.

Both huts have a winter room and there is guardian in march-april and july-september. Exact opening times depend on conditions.

Because of the two huts it is not necessary to camp out. If you do choose to camp, keep in mind that camping is not officially allowed in Switzerland. In most places above the timberline it is tolerated, but do not put your tent/bivvybag anywhere near the huts.

A strong party could also climb the mountain in one day from the valley without staying overnight. 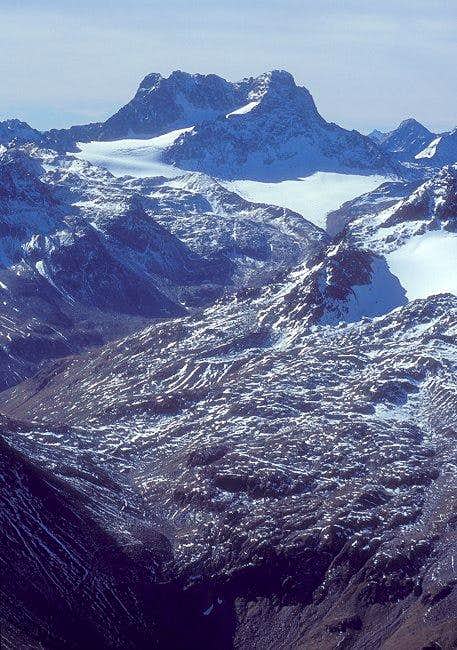 The Porta is left of the mountain on this picture. For the normal route enter the shining glacier basin, for the traverse go to the beginning of the ridge and start climbing.
For most routes on the Piz Kesch you first go to the Porta d'Es-cha, a small pass at 3008 meters east of the mountain.

Follow the path from the hut to the Porchabella glacier. Climb the fairly easy glacier directly to the Porta d'Es-cha (there is probably a trail on the glacier in the main season). You can stop short of the pass itself, at the place where you can enter the high glacierbasin between the northeast ridge of the main summit and the main ridge. On the photo by Mathias Zering there is a nice view of the glacier and its upper basin.

Follow the trail up from the hut. The first part is mixed grass and rock and the path gets gradually steeper and harder. Later the path traverses a steep slope of scree and most of the time snowfields. Most of the fun is in the last 20m though: a bit of rockclimbing secured by a chain. I think it would be a II without the chain. From the pass you can descend onto the glacier.

This is also a very nice walk for experienced mountain hikers. Do not attempt this if you're not secure on your feet. I once saw a woman on top of the pass who did not dare to move. Quite a problem at 3008m! 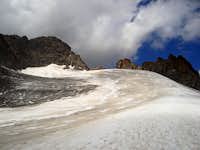 This is by far the easiest route on the mountain, but a very nice tour nonetheless. I would rate the climb PD and the technical rock climbing is at most grade II. From the huts the climb takes 3-3,5 hours. I'll put a short description here.

From the Porta d'Es-cha enter the glacier basin and head straight for the northeast ridge. On the photograph to the right you can see a patch of snow leading high on the ridge. Follow this up as high as possible. The difficulty depends on the conditions, but I remember it as being about 40 degrees steep. From here you climb to the summit over various IInd degree steps. When we descended the mountain we followed the northeast ridge as much as possible, but other descriptions seem to favour the east face. I think they are both feasible, but probably the face will be slightly easier. Schmitt and Pusch (see books below) mention that the ridge is more airy and has more II, but also has better rock. The quality of the rock is reasonable, but there are loose rocks here and there so take a helmet. There is a small cross on the summit.

A nice tripreport in german with some nice shots can be found here: Steinmandl. 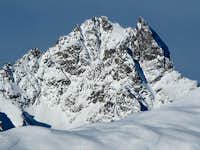 This winterpicture shows the Needle as a true needle!
First ascent: P. and M. Schucan, 1906

The sharp Keschnadel (especially seen from the south!) offers a very interesting climb for more experienced climbers. This climb is longer and much more difficult than the normal route and it is rated AD+ (Griffin), with rock climbing up to grade IV. Good parties will take 5-6 hours to the summit. I will put a short description of the route here. Some more information is in the route page.

From the Porta d'Es-cha the east ridge of the Keschnadel can be clearly seen. From the pass walk on the glacier around some towers on the ridge untill you are at the base of the needle. From here follow the relatively easy (I-II) ridge to the large 'flat' balcony. From here the real difficulties begin with several passages III and III+ and two passages IV. The rock here is of a type named Gneiss and the quality on the ridge is very good. After you arrive on the needle, abseil or descend to the ridge and follow this to the central and the main summit (the 'Keschridge'). While there is no climbing above grade II, this is no walk in the park! The ridge is quite long and sometimes exposed. From the main summit descend the normal route to either of the huts.

There are not many other routes on the mountain. Griffin describes a route on the eastface of the Keschnadel. This is a very difficult climb (TD-) with rockclimbing in grade V+ and A2. With rock as good as on the eastridge, this is interesting for people who are up to this kind of routes (not me). The route was bolted in 1997.
On the map the route on the northwest ridge to the main summit also looks feasible, but I have seen the upper reaches of the ridge and it looks hard with dangerously crumbling rock. Because of this I would advice strongly against this ridge.

Like everywhere in the Alps, no permits are required. 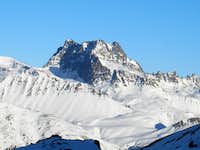 Piz Kesch is nice in summer as well as in winter.
Most people climb the mountain in the summer and for the Keschnadel route this is the logical choice (Late june - early september).

The normal route is also a popular ski-tour (with the ski depot on the upper glacier) and can be climbed in early spring (march-april).

The Engadin is sheltered by mountains and has a nice climate, but mountain weather is never predictable. Being a high mountain it does have a tendency to attract clouds, especially from the north. In summer watch for afternoon thunderstorms.

For current weather forecasts it is best to look for the Sankt Moritz (southwest of the mountain) weather as well as for the Davos (northeast of the mountain) weather. Useful links in dutch (but the symbols are quite clear) are Weeronline St. Moritz and Weeronline Davos. The swiss meteo also has detailed forecasts for local places, for instance Davos and Zuoz (a village in the oberengadin closer to the mountain than St. Moritz), but you can fill in other names as well.

If you are satisfied with the scale 1:50000 and you are planning also to climb in the Bernina alps there is a great composition map ('zusammensetzung') with both areas. The number of this map is 5013 and the title is Oberengadin - Engiadin'Ota.

I do not know the second one myself, but generally the Swiss guides cover a small area (in this case only the Albula alps), but they are very thorough.