Igl Compass is an easy +3000m peak in the heart of the Albula Alps. It is one of two peaks that really catch your eye when cycling up the Albula Pass from Bergün/Bravuogn, the other one being the striking Piz Dschimels (2782m).

The Albula Pass is remarkable, in that it has two very different sides. The western side, from Bergün/Bravuogn, is truly idyllic, with forests covering its lower regions, and lush alpine meadows higher up. The eastern side, on the other hand, is windswept, empty and harsh.

For some reason, this region is greatly neglected on SP. Even Piz Ela (3339m) does not seem to have a page of its own, even though it is really well known here in Switzerland, and has an entire nature park named after it. In fact the largest nature park in Switzerland. And right on its border sits the summit of Igl Compass. 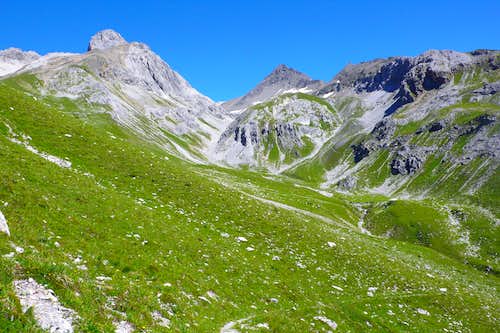 Val Zavretta, Igl Compass (3016m) and the track to the Fuorcla Zavretta (2901m), seen during the descent from Muot Surent
Going by the number of hikers, exploring the upper Albula Valley is all about the southwest side (Fuorcla da Tschitta, Fuorcla da Bever, Fuorcla Crap Alv). The northeast side is very very quiet, and Igl Compass is no exception. Even on beautiful days, you are unlikely to meet many fellow hikers. You will, however, hear lots of motorcycles, as the Albula Pass (2312m) is an understandable favorite with motorcyclists, and the road is almost directly below Igl Compass, 800m lower.

Summit panorama (3016m)
The summit offers reasonably fine views to the south (Bernina Group) and west (Ela Group), but nothing that will knock you off your feet.

An excellent online map can be found here.

Igl is Rhaetoromanic, the official language of this region, and normally means 'it' or 'the'. It has nothing to do with the german 'Igel' (hedgehog). Since this peak is visible from afar in the valley, and points you to the pass, it may simply mean 'the compass' or 'the guidepost'.

The two obvious places from where to start your attempt at Igl Compass are Preda to the west and the 'Hospiz' at the Albula Pass to the east. Far less obvious, but with a magnificent section below Piz Muot (2670m), is the long route starting from Bergün/Bravuogn. 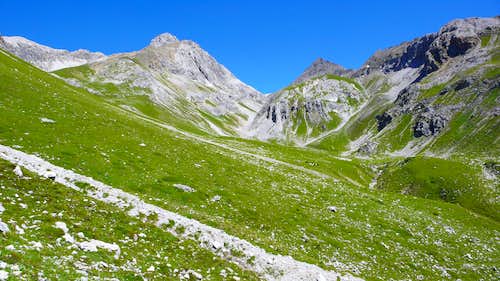 Val Zavretta and Igl Compass (the dark triangle just right of the center), seen from the route from Bergün/Bravuogn via Muot Surent (labels here)
Bergün/Bravuogn and Preda can be reached by train. In summer, service is very frequent. The Albula Railway is an adventure in its own right, one of the most spectacular stretches in the world, and a very justified UNESCO World Heritage Site.

The Hospiz at the Albula Pass can only be reached by car or motorcycle, and normally only between June and October. Coming from the west, leave the A13 at exit 22 (Thusis Süd), and head for first Tiefencastel and then Bergün/Bravuogn. The approach over Klosters and Davos is certainly more scenic, but takes a lot longer. Coming from the east (Bernina Pass) or south (Maloja Pass), just follow the signs St Moritz. If you have the choice, opt for the Bernina Pass. It is way more scenic, and you'll avoid both the decadence and the traffic jams of St Moritz.

Coming from Austria, there is a nice road alongside the river Inn, through Zernez. This road has the added advantage that it passes many acceptable camp sites. 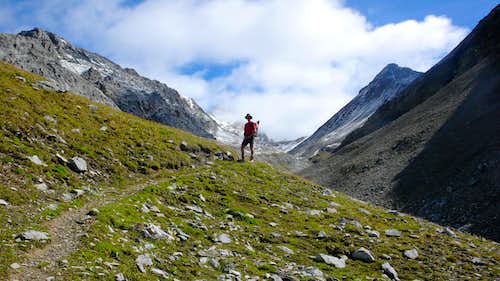 Piz Zavretta (3043m) to the left and Igl Compass (3016m) to the right
All the German sources classify it as T3. The western approach, coming up from the Val Zavretta, is probably only T2, but the east side of the Fuorcla Zavretta, in the early stages of the descent, boasts some steepish sections where you have to search for your way over large and jumbled boulders, some quite unstable. So for those sections T3 might be accurate.

Apart from lightning, I cannot think of any realistic objective danger on any of the three ways up. Sure, there is occasional rock fall from Piz Üertsch (3267m), but you would have to be extremely unlucky to be hit by something large, as the track is only directly below that wall for a few brief sections. I wouldn't worry about it too much. The same applies to the section below Piz Muot when doing the route from Bergün/Bravuogn.

There a three routes. All three share the same final stretch, from the Fuorcla Zavretta (2901m) to the summit (3016m).

Ela from above Preda Dadains 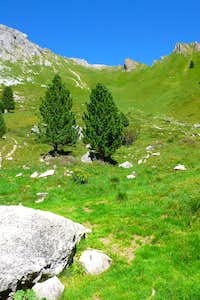 Above Preda Dadains, at 2000m
From the small parking space at Preda Dadains, just above Preda, the entire route is marked, to the Fuorcla Zavretta with the official yellow signs, and from there to the summit with cairns. But actually, once you made it through the wooded section, you cannot possibly go wrong, as the trail is clear, the direction obvious, and the pass, your first target, almost always in full sight.

There is also a route starting in Preda itself, at the railway station, but unless you come by train, I cannot recommend it. Up to the point where it meets the other trail, it is almost entirely in the woods, so you miss out on some great views. In addition, it is also significantly more difficult to find. So I would park just above Preda and start from there. The two routes meet at 2134m.

The approach from Preda Dadains has one flat section at just over 2100m. For the rest, the route climbs consistently, being at times rather steep, but never ridiculously so. 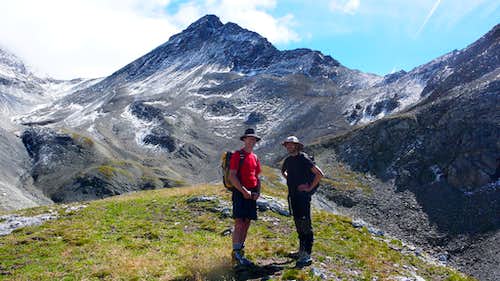 The ridge is exposed to the wind, and therefore normally free of snow and ice. We brought crampons nonetheless, because the last 300 vertical meters to the pass are prone to snow and ice.

On this route, water can be a problem. It was when we climbed it. After about three-quarters of an hour from Preda Dadains, some 300 vertical meters in the ascent, there is a cattle drinking trough. You must fill up here, as there will be no other opportunity until way higher up (at around 2700m). While it is true, that at one point you touch the Ovel da Zavretta, the main stream in the valley, you cannot fill up there, as many cows graze above that point. 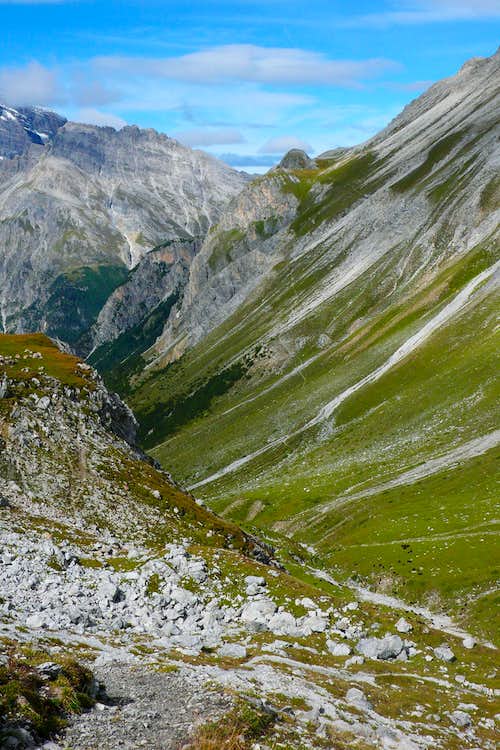 Alp Zavretta with Piz Muot (2670m) to the right and Piz Ela (3339m) to the left
This route starts directly at the camp ground above Bergün/Bravuogn. It first climbs to Muot Surent (2520m; +1112m), then descents to the Alp Zavretta, and there, at the point where it crosses the Ovel da Zavretta (2225m; −295m), meets the track coming up from Preda. From there, follow the route above to the Fuorcla Zavretta and on to the summit (3016m; +791m).

Once you are at the dirt road leading up Muot, the route is clear. The problem is to get to beginning of that road. Leave the camp ground at the west side of the Alvra, the main stream roaring down the Albula Valley, and stay at that side. You walk through a pine forest, gently climbing in the shade, gradually leaving the Alvra stream to your left below you. After some 25 minutes, you see an inconspicuous track branching off to the left, dropping to the stream. There is a sign, but is does not mention anything particularly useful. Still, you need to go down here, to a narrow bridge. Cross it, climb the opposite slope, and walk straight up to the main road leading from Bergün/Bravuogn to the Albula Pass. Once you've reached the road, you see at the other side a dirt road going up and bending to the left, with a sign related to some construction company. This is the route to Muot Surent. This point is at an altitude of 1473m.

From the Albula Pass (704 vertical meters)

This route feels a bit like cheating. From Bergün/Bravuogn to the top you climb more than 1900 vertical meters, from Preda still 1227, and from the Albula Pass only 704. That just does not compare. And the views don't compare either, as this route climbs to the Fuorcla Zavretta from the east. And the east side of the Albula Valley is by no means as scenic as the west side. On the plus side, you'll have no problems finding good water, and there is room for some scrambling.

We used this route for the descent. Took us a little under 1.5 hours. 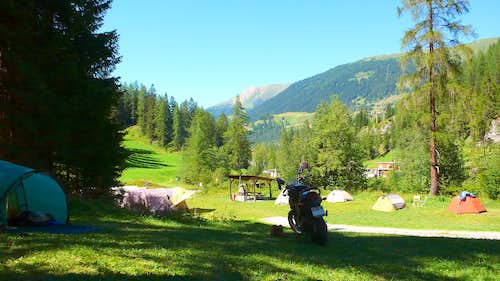 My tent and motorbike on Camping Albula
There is a really good campground just above Bergün/Bravuogn, called Camping Albula. Quiet, inexpensive and with good views. The reception is only staffed in summer, but if you are brave enough —the field for the tents is at exactly 1400m—, you are allowed to camp there all year round. Call +41 (0)81 407 11 26. Highly recommended! 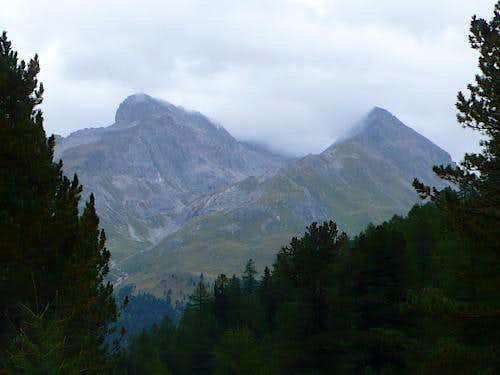 Weather forecast for the summit of neighboring Piz Üertsch (3268m)