Tschima da Flix is an important mountain part fo the Albula group. The name in the local dialet means in Italian "Cima di Flix" or "Flix Peak" above the "alp Flix".  It is composed by a long rocky ridge orientated from west to east, with 3 summits: secondary summit 3301 - main summit 3316 - Piz Picuogl 3333 (to be considered as peak apart). 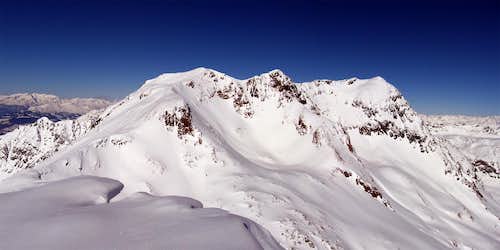 Tschima da Flix from Piz d'Agnel. South side
From the secondary summit start 2 ridges that connect the mountain to the Piz d'Agnel on south and the Piz Calderas on north. On the west side, it overhangs the lake of Marmorea with cliffs made of  brocken rocks. On the north side it hosts a glacier calle Vadret da Calderas.  Tschima da Flix with its neighbors, are placed at the end of val Bever, but the best approach is from the Julier pass or otherwise from Marmorea.
It is commonly climbed in summer but probably mostly in winter by skiers due to its easy approach from the Julier pass. One of the most classic ski route of the area.
At the head of val Bever is placed a confortable hut called "Chamanna Jenatsch", good place for rests and starting point for the surrounding mountains. 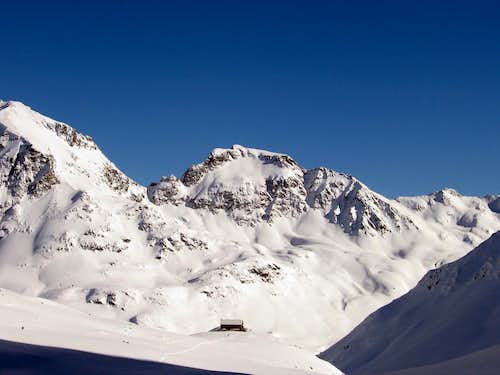 Video of the ski route made in february 2013