Viewed from the west, Pyramid Peak certainly lives up to its name. Pyramid is not one of the big-name peaks in the Wind River Range, and not a lot of people climb it, which is exactly what makes it an excellent destination for backpackers interested in scrambling to a high summit yielding sweeping views of the rugged, little-explored mountains in the heart of the central Winds.

Pyramid Peak is about a mile southwest of Hailey Pass. Although the pass is on the Continental Divide and a short part of the scramble follows it, Pyramid itself is not on the Divide.

Because Pyramid Peak's summit is about 14 miles from the trailhead by its shortest route (from Big Sandy), few people are likely to load the backpack and head all the way out there just for a Class 3 summit that isn't even among the Winds' elite 13ers. However, someone interested in backpacking deep into the Winds, seeing what the range is all about, and climbing a few peaks along the way should seriously consider the following idea: from either Big Sandy or the Bears Ears Trailhead, one can embark on an excursion that makes a loop over Hailey and Washakie Passes, both on the Continental Divide, and accesses Pyramid Peak, Mount Hooker, Bernard Peak, and Mount Washakie. These peaks can all be climbed by Class 2 or 3 routes and are perfect for backcountry peakbaggers who don't want to pack climbing gear along with everything else. This trip has everything one could want in the Winds-- tundra, alpine lakes, waterfalls, fishing, wildlife, and, of course, rugged mountains-- and largely avoids crowds. Unless you MUST see the Cirque of the Towers or Titcomb Basin or MUST do technical climbs out here, this trip will not disappoint a bit (actually, Mount Hooker and a dome-like peak by Grave Lake offer some great technical climbing, anyway). 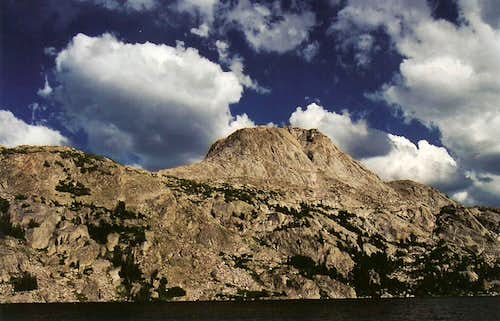 Before heading out, drivers may want to stop at a convenience store and buy a Wyoming recreation map. Another good resource to have is the Wyoming Atlas and Gazetteer.

Access to the Bears Ears Trail seems to have gotten sticky in the years since I hiked it-- lucky for me but not for anyone who’s had to deal with the frustration of these issues. If the access is open, though, take the Bear’s Ears Route, which is longer and harder than the alternative but is less crowded and incredibly scenic.

The latest news, as of August 2007, is that the road is open again but that users have to purchase the reservation fishing permit to drive the road (see Red Tape for fee information).

Drive south on U.S. 287 from Fort Washakie, on the Wind River Indian Reservation, a mile past the Wind River Agency and just north of a trading post and store. There may be a sign for Trout Creek Road. This is the road you want. Drive west for about 5 miles and bear right on a gravel road for Moccasin Lake. Bear right again when a spur road branches off in about 0.3 mi. Now the road starts climbing steeply and becomes narrower and rockier. Still, most passenger cars should get you to the trailhead.

When the road meets the Moccasin Lake Road after about 19 miles, bear left for Dickinson Park. In less than a mile, the road enters Shoshone National Forest. You are safe now unless someone gates the road behind you, and this has happened. Almost 21 miles from U.S. 287, take a signed spur road (right) to the Bears Ears Trailhead. The road gets pretty rough and rutted now, but careful drivers can make it the half-mile or so from the main road to the trailhead.

Big Sandy-- An alternate, easier, but busier approach to Washakie Pass is via the popular Big Sandy area. The drive to the TH may be the crux of this route because it is so long and parts are rough. Reaching the trailhead for the extremely popular Big Sandy area (it is the main TH for the famous Cirque of the Towers) requires a long drive, but there aren’t any access issues. Because there are several ways to get to Big Sandy, requiring so many details, I will just describe the one used most often, which is the approach from Pinedale. 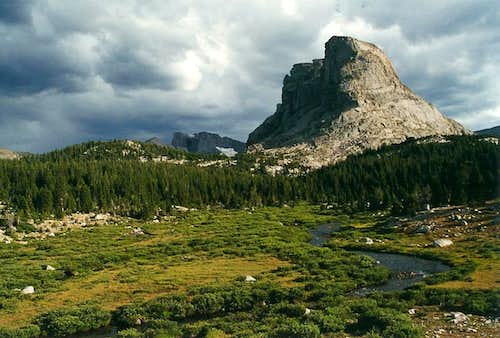 Approach from Bears Ears TH: The Bears Ears Trail quickly climbs past timberline, gaining almost 2800’ in eight miles to its crest at 12,000’ a little past Mount Chauvenet, where the trail bends south and then west again as it descends 2000’ to the South Fork Little Wind River and a junction with the Washakie Trail. Pass a junction with the Lizard Head Trail (long access to the Cirque of the Towers) at 8.8 miles. Scenic and popular Valentine Lake is at 11 miles. The trail bottoms out and meets the Washakie Trail at about 12.5 miles. Fording the South Fork Little Wind River is necessary and could be dangerous early in the summer.

Almost half the Bears Ears Trail crosses open tundra, and there is little or no shelter available. Start early in the morning, or watch the sky carefully if you start in the afternoon.

To get to Hailey Pass from the junction of the Bears Ears and Washakie trails, turn north (still the Bears Ears Trail) and follow the trail 5.3 miles to 11,200' Hailey Pass, on the Continental Divide. Along the way, you will pass scenic Grave Lake and the hard-to-find spur to awesome Baptiste Lake, which you should visit if time permits-- it's not to be missed. The spur is 1.3 miles from Hailey Pass, 2.3 miles from the bridged crossing of Grave Creek near the eastern end of Grave Lake. 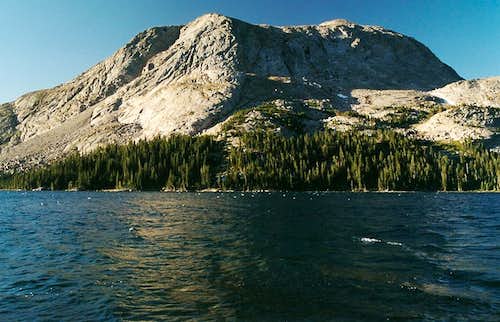 Grave Lake
Approach from Big Sandy: The hiking route itself climbs about 2100’ to Hailey Pass in 13.1 miles via the Fremont Trail and the Hailey Pass Trail. Once you are a few miles from Big Sandy, crowds will almost certainly thin out dramatically, and the trail over Hailey Pass is rated as lightly trafficked.

Climbing Pyramid: From the pass, head west up the steep dirt slopes to a small saddle at 11,400' (if snow-covered, this section could be dangerous without an ice axe or at least trekking poles) and then follow the ridgeline south (left) to Pyramid Peak. The climb is easy Class 3 on a mountaintop that is essentially a pile of huge, stable boulders. Pyramid has beautiful scenery and great solitude. I imagine very few people make Pyramid a primary destination and that it is most often climbed out of curiosity by backpackers heading over Hailey Pass.

The views include perspectives of Raid and Ambush Peaks and others in the Bonneville Basin area, which is a relatively lightly used section of the deep Bridger Wilderness. There are also excellent views of the Mount Hooker area, Pyramid Lake, and many tarns unreached by trails. 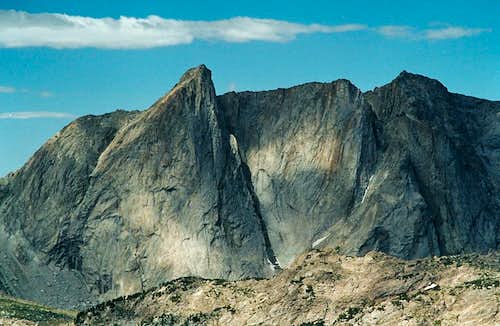 From the summit of Pyramid

Access issues have been a problem in the Dickinson Park area in recent years, and it may be easier to approach from Big Sandy. Currently, a Reservation fishing permit is required for driving the road to Dickinson Park. Here is a PDF showing the fees and regulations as of 2011. To make sure you are aware of the current fees and regulations, you are advised to use this contact information:

Currently, hiking and camping permits aren’t required in the rest of the Winds, but voluntary self-registration is a good idea. Don’t go alone unless you have to. I had to.

Grizzlies have returned to the northern Winds and will probably spread south. This is a good thing, but know proper bear-country etiquette. Black bears are abundant and have been troublesome in some of the popular backcountry areas, so store food properly, don’t cook in what you sleep in, don’t chase cubs around, etc.

Camping is available at small Dickinson Creek Campground (a bit south of the turnoff for the Bear’s Ears trailhead) and at Big Sandy. You can probably car camp at the trailheads, too. Backcountry camping is, of course, abundant and delightful. My camp on a ledge over the South Fork Little Wind River was one of the greatest campsites I have ever found. Valentine Lake has many campsites, but it’s worth the extra hiking to find the solitude of the river valley below it. Plus, your day trips to the peaks and passes nearby will be shorter and easier. There are many excellent campsites along the Big Sandy approach, too.

Avoid camping (and walking) on the tundra unless nightfall or emergency conditions make you.

Next to USGS quads, the best maps I have seen for the range are those published by Earthwalk Press. These maps have the following advantages over the USGS quads: two fold-out maps cover the entire range, wilderness regulations and precautionary information are on the maps, and the maps are waterproof.

Of great help planning excursions in the Winds is Hiking Wyoming's Wind River Range. The book has almost no climbing information, but that is not its purpose. Instead, it has detailed route descriptions with good directions, elevation profiles, and distances. Some customer reviewers complained about the poor maps, but anyone relying on a guidebook's maps for trip planning and actual hiking is probably a fool, anyway. Get the Earthwalk Press maps and this book and start trip planning.

If approaching via Big Sandy, the agency to contact is Bridger-Teton National Forest
(307-739-5500).