Red Butte is the highpoint of the Red Buttes Wilderness, a relatively small wilderness of 20,000 acres that straddles the Oregon-Californa border in the Siskiyou Mountains. The peak is adjacent to a twin summit of nearly equal height, as a result the peaks are often known collectively as the Red Buttes. The jagged appearance of the two summits and their bright red color make them some of the most recognizable peaks in the Siskyous, and are easy to identify from many others peaks in the region.

The bright red color of the Red Buttes is a result of weathering. The Red Buttes are composed of peridotite, an ultramafic rock with a high olivine content. When exposed to the elements peridotite turns from its natural green color to bright red and orange.

As with most regions within the Siskiyous, the Red Buttes contain extraordinary biodiversity. This is due in part to the nature of the Siskiyou Mountains. A large portion of the crest of the range trends east to west, therefore the Siskiyous act as a natural land bridge for species to intermingle. Here vegetation native to the great basin can be found growing alongside ferns and other coastal species. This is also due to the unique soils found here, the soils in the Red Buttes wilderness are composed primarily of broken down serpentine and peridotite, which are toxic to most plants. The few plants that can survive here do not have to compete with other species, so are much more prevalent here than in other regions. 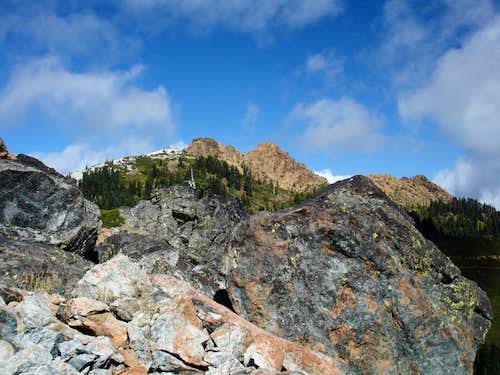 Red Buttes from the southeast

The original proposal for the Red Buttes wilderness included an additional one hundred thousand acres and would have extended from Grayback Mountain in Oregon to near the Klamath river on the far southern slopes of the Red Buttes. The proposal was shut down due to the value of the area's timber. Today this area is known as the Kangaroo Mountain Roadless Area and despite the lack of formal preservation, still retains many wilderness qualities. For this reason the Red Buttes region is a deceptively wild and vast wilderness with tremendous solitude potential, and not the small pocket wilderness it appears to be on the map.

This wilderness, both formal and undesignated, encompasses the second most rugged section of the Siskiyou Range, only being surpassed by the northern half of the Siskiyou Wilderness. The bright red peridotite and serpentine rock was sliced up by glaciers into many barren exposures and outcrops. The effects of glaciation are also evident in the numerous sub-alpine lakes in the region, the most scenic of which is Elk Lake located at the base of the north face of the Red Buttes. 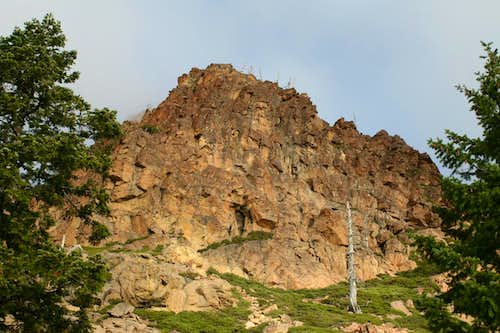 
Views from the summit are expansive. To the south the high peaks of the Marble Mountains stand out with Boulder Peak most obvious. Slightly east of the Marbles Mount Shasta is plainly visible. To the east the higher gentler peaks of the Siskiyous are visible in the foreground with Mount Mclouglin behind. To the west the Jagged crest of the Siskiyou Wilderness is visible with the awesome Preston Peak standing most prominent. 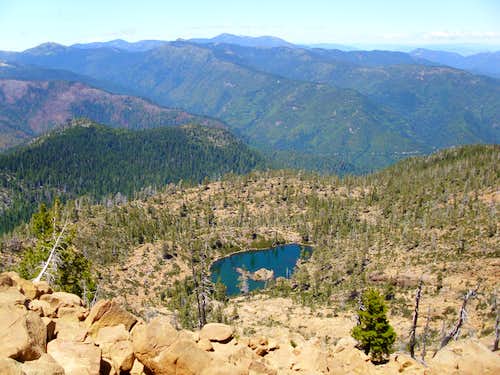 Elk Lake From the summit
From the North:
From I-5 North or South near Medford follow signs West to the town of Jacksonville. Once heading in this direction for about 8 miles(highway 238) through the town of Jacksonville, you will reach the settlement of Ruch. Once in Ruch you will turn towards an Upper Applegate pointer for approximately 19 miles. At the end of Applegate Lake you will reach a T-shaped intersection. From here turn left onto Applegate Road for 1.2 miles to a gravel intersection. Continue straight on Road 1050 for 0.9 miles and then fork to the right onto Road 1055 for 10 more miles. This will put you at Cook and Green Pass with the Trailhead for the PCT. High Clearance would be helpful for this drive but a sedan could be driven with some skill.


From the South:
From Yreka head north on I-5 to the junction with Highway 96. Follow 96 for 43 miles to the town of Seiad Valley. In Siead Valley turn north on Seiad Creek road toward the Red Buttes. Stay on this road for 12 miles, the road has one turn off that some might mistake as the main drag, when in doubt head straight and do not make any right turns. Eventually the road becomes forest route 45N20. 12 miles will put you at Cook and Green Pass with the trailhead for the PCT. The road is well graded gravel and should be passable to any vehicle.

From the PCT trailhead at Cook and Green Pass the first step in reaching the summit is to head west toward Bee Camp near the base of the mountain. There are two options for this. 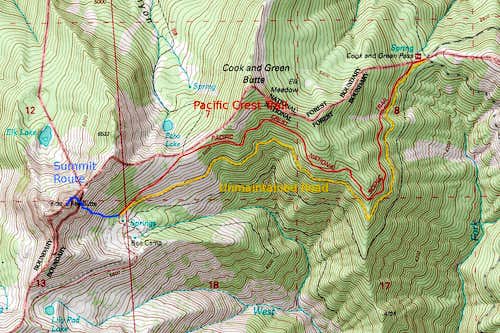 The trail begins by climbing through a dense forest before rounding a corner into the more sparse peridotite region. At this corner is the first view of the peaks. The PCT continues to climb to the crest of the ridge to the turn off to Echo Lake. From the turnoff the trail descends 200 feet to Bee Camp at the base of the Red Buttes.

From Cook and Green Pass an unmaintained road branches west toward the peaks. A sign states that the road is "not maintained for travel". Despite this warning the road is not as bad as advertised, a passenger car can make it about half a mile up the road without risking damage, and a high clearance vehicle can go quite a bit further, possibly to the base of the mountain depending on the skill of the driver. The road climbs a short distance to a corner where the first view of the peaks comes out, then becomes quite rough for a section traversing somewhat level before becoming smooth again near Bee Camp. 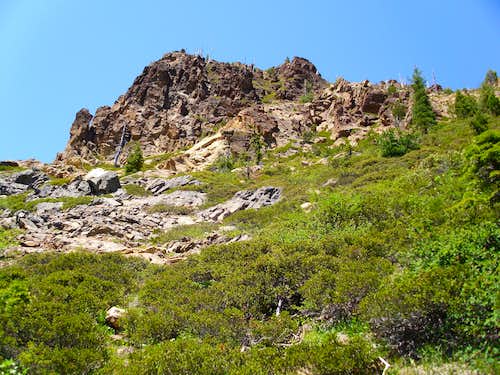 South Face of the east summit
.4 miles with 1100 feet of elevation gain from Bee Camp to the East Summit

From Bee Camp begin heading toward the base of the east summit. The first section is very brushy and there does not appear to be any reasonable way around it, so simply pick a line and plow through. Once through the first section of brush, begin heading directly toward the base of the cliffs on the east summit. Skirt below the cliffs to avoid the worst of the manzanita, some bushwhacking will still be required but this is mostly boulder hopping. From here gain the east ridge and follow it to the east summit. A few moves of class 3 are required along the ridge.

On the summit is a summit register with paper scraps and no notebook, a wind break and a geocache about 15 feet to the west.

From the east summit, the west summit looks like it could be higher. Most maps show the summit as the east peak, but if attaining the true highpoint is your goal visiting both is worthwhile to remove any doubt. The traverse to the west summit involves descending and re-climbing about 200 feet along terrain similar to what was encountered along the east ridge. No significant brush should be encountered, when in doubt stick to the north side of the ridge. Some class 3 scrambling will be required on this traverse.

Wilderness permits are not required however campfire permits are required if you plan to have a campfire or use an open flame stove.

The roads on either side of Cook and Green Pass close during the snow season, consider the approach from the Middle Fork of the Applegate described above during this time. 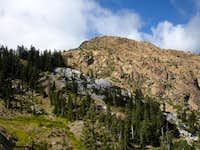 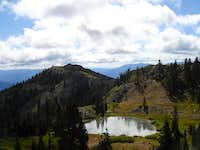 Camping should be allowed anywhere on national forest land unless otherwise posted. Camping at Cook and Green Pass is an option, though no water is available. Bee Camp is a better option, and has several springs for water. The summit is also home to a wind break rock wall if one desires to camp up there. 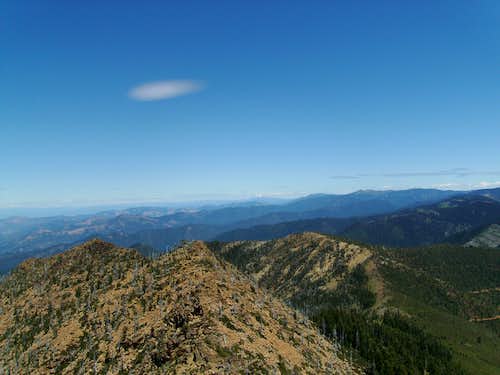 As of 08-25-2009, there is an active fire with smoke visible from Yreka. It was a prescribed Forest Service burn that got away and is now, as told by NFS, about 300 acres. Just some info. for those considering Red Buttes.