Preston Peak is a massive peak buried deep in the mountains of the rugged and remote northwest corner of California. It is the highpoint and reigning monarch of the Siskiyou Wilderness, and bar none the most rugged and spectacular peak in the entire Siskiyou Range. Its summit commands attention from far away, and is easily recognizable from many other peaks in the Klamath Mountains and Southern Cascades.

Preston Peak rises dramatically above the surrounding dense forest. They say early settlers to this region thought the mountain was 10-12,000 feet high. The scale of this mountain is described by John Hart in his book “Hiking the Bigfoot Country”.

"At a mile and some above sea level it is by no means the highest peak in the Klamath Mountains...Yet there is no mountain in northern California which I remember with more pleasure. They say that early travelers on the Klamath River, glimpsing the mountain above them, thought it was 12,000 feet tall. The first time you see Preston Peak you will know why. Whether you look up at it from some canyon, or stare at its north side from the back-road pass into Youngs Valley, or stand with a rope at the base of one of its less reasonable approaches, the peak looks big. It feels big. For one thing, most of its 7,309-foot rise comes very suddenly.”

The peak is rugged on all sides, rising 4000 feet in less than 2 miles from Clear Creek Canyon on its west side, and nearly 6000 feet on its east from Indian Creek Canyon. Its north face is most dramatic, an imposing 2000 foot wall of dark vertical granite. Nearly a dozen lakes and tarns are tucked into the peaks numerous cirques, the largest of which is Raspberry Lake, the deepest lake in the Siskiyou Wilderness. 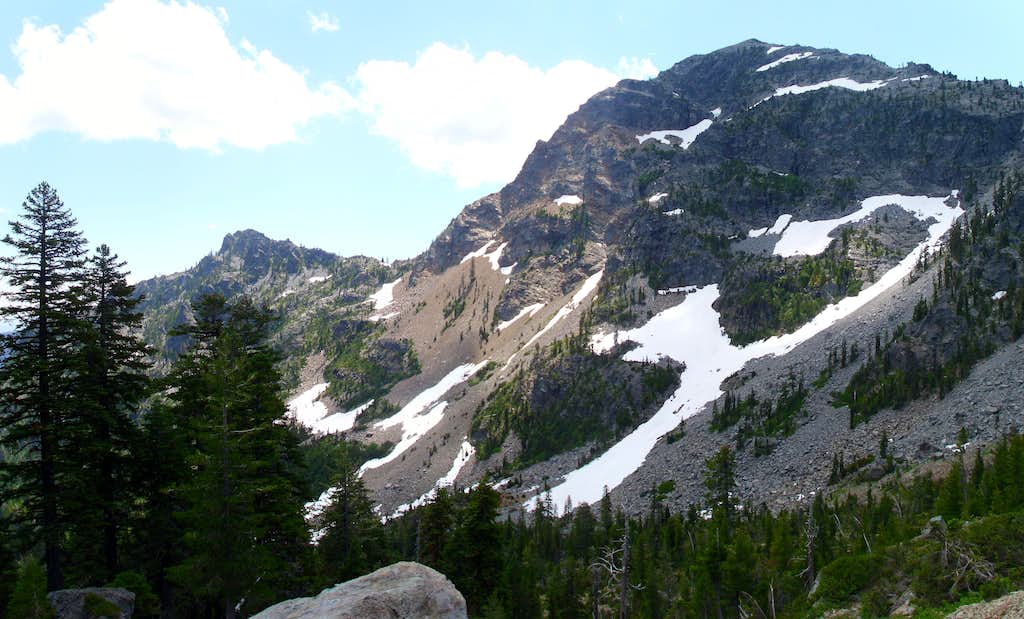 
Views from the summit are incredible, with seemingly all of Northwestern California at your feet. What is perhaps more impressive is the fact that from its summit not a single trace of civilization can be seen. To the west, craggy peaks give way to forested ridges, eventually giving way to the Pacific Ocean. To the east the deep canyon of the Klamath River consumes the view, while further off the skyline repeats the pattern of forested ridge lines, giving way to craggy peaks.


The Siskiyou Wilderness is one of the least used wilderness areas in California. The trailheads that provide the most reasonable access to Preston Peak are however, the two most popular trailheads in the wilderness, meaning complete solitude is not a guarantee on summer weekends. You may encounter another person or two at some point during your trip, but this area is far from crowded.

The immediate area around Preston Peak was designated as the Preston Peak Botanical and Geological Area to protect the rare plants that can be found there. The Siskiyou region features the most diverse coniferous forests in the world and the Preston Peak area is espeically diverse due to its high elevation, proximity to the ocean and unique soils. Unique plants include, Alaska cedar, Noble fir, Brewer spruce and Port Orford cedar.


Preston Peak has 2,549 feet of prominence making it the 83rd most prominent peak in the state of California. As such it is often climbed by those working on the California 2,000 ft Prominence Peaks.


The combination of its wilderness setting, scenic approach, rugged character, and dominating presence among neighboring peaks make Preston Peak a worthy objective that is well worth the moderate scramble required to attain its summit.


Doe Flat Trailhead:
By far the most popular trailhead in in the Siskiyou Wildernes.This Trailhead provides access to the West Slope route.

24 miles up US 199 from Crescent City (or 55 miles over From Grants Pass) Turn on Forest Route 16 / Little Jones Creek Road. After 10 miles turn left on Forest Route 16N02. Follow this road for 3 miles to the trailhead. 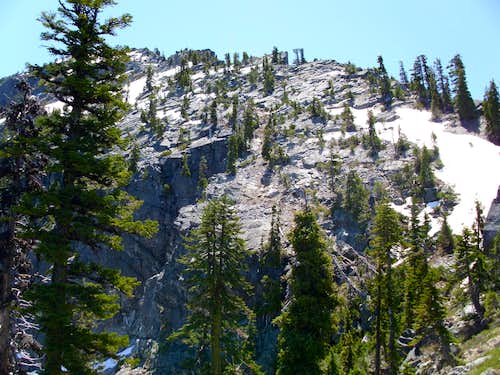 Most Ascents of Preston Peak take place by this route. Begin at the Young's Valley Trailhead and hike 3 miles to Young's Valley. Pass the junction with the Clear Creek Trail and continue toward Raspberry Lake. The Trail begins as an old road bed until reaching an old chrome mine 6 miles in. After the mine the trail becomes much narrower, the last mile to the lake is much more rugged. Raspberry lake is 7 miles from the trailhead.

From the saddle between Peak 6121 and Preston Peak the route is much more obvious, simply follow the Northwest ridge to the summit. Ascending the ridge involves crossing a variety of terrain including; heavy brush, dirt gullies, boulder hoping and some scrambling on granite slabs. A more detailed description of this route can be found here. 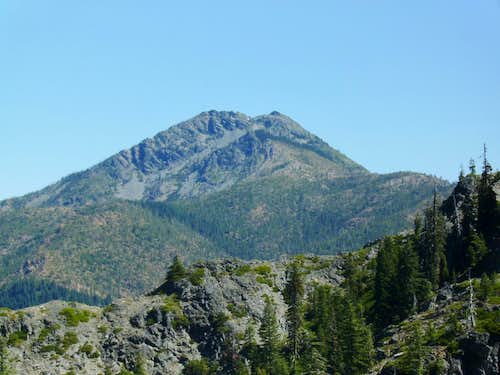 West Slope
The Doe Flat Trailhead provides access to the West slope of Preston Peak, however this approach involves 3000 feet of elevation gain on the return, which can be demoralizing after a long summit day. Descend 4 miles along the Doe Flat Trail to Trout Camp. The last mile is quite steep. From trout camp head north on the Clear Creek trail for 2 miles to the junction with the Rattlesnake Meadows trail. Follow the Rattlesnake meadows trail to Rattlesnake Meadows. 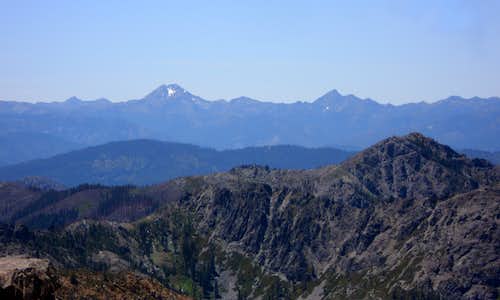 A few summers ago, three of us climbed yet another fantastic route up this peak: the northeast ridge.From our base camp at a tarn below the east face of the mountain, we hiked to the ridge through snowfields and talus and then turned toward the summit, staying right along the crest. Here the route turns to 3rd and 4th class scrambling. By staying true to the crest, we encountered two short pitches of easy 5th class (5.2-5.4), with wild exposure overlooking the sheer north face of the mountain. The final couple hundred feet is an easy boulder hop to the summit. We named our route ‘The Spine of the Jellyfish” – don’t ask why.

There are certainly many other possible routes on this peak. I’ll bet our route up the northeast ridge can be ascended without encountering any 5th class by trending left (south) off the true crest onto innumerable ledges and ramps. And that north face looks like multi-pitch, vertical action.

We approached our base camp tarn via Cedar Crest, a spectacular ridgeline that extends south from Preston Peak to the Clear Creek. Plan on three days for this cross-country approach (highly recommended!), driving in from highway 96 along the Klamath River.

Preston Peak has one of the best summit views in the Klamath Mountains. To the west the Pacific Ocean is clearly visable. To the east the vast intermountain Klamath region of Northern California stretches with endless rugged peaks definfing the skyline. 26 peaks and features are labeled in the above panorama. 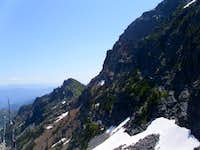 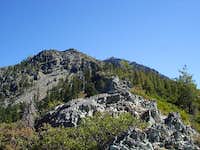 Above Raspberry Lake
Preston Peak is located inside the Siskiyou Wilderness. This wilderness area contains no special regulations other than standard wilderness ethics.

Knopki Creek Road and Little Jones Creek Road close during the wet season (around October) and stay closed until the snow melts out, making summer the most realistic time to visit, though the peak could be attempted year round. Preston Peak can see heavy snowfall in the winter time and snow may linger into summer. 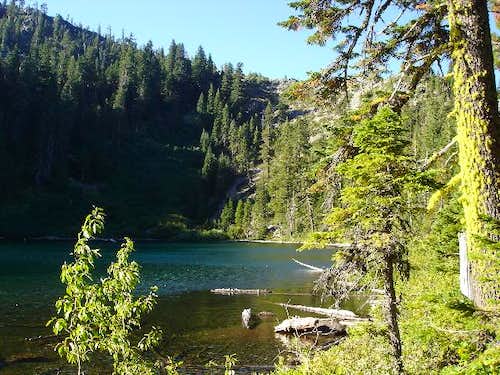 Raspberry Lake
Camping is allowed just about anywhere in the Siskiyou Wilderness area and surrounding National Forest land. Some specific campsites are listed below and shown on the attached map. Camping at either trailhead is also an option. 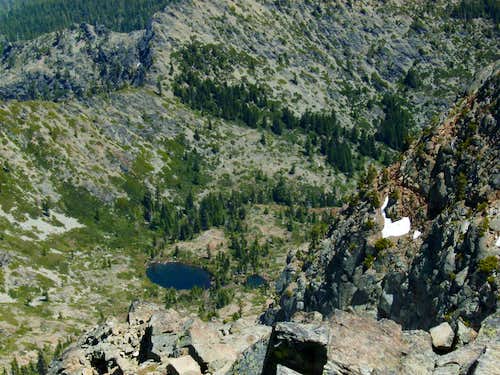 A tarn on the east side of Preston Peak
For more information on Preston Peak, consult pages 182-192 of “Hiking the Bigfoot Country” by John Hart. The book is a 1975 publication of the Sierra Club

Calling local National Forest ranger stations will most likely be of no use. The individuals I have spoken with weren't much help with anything. In fact most National Forest employees in the area probably haven't even been inside the wilderness area.

North Face from point 6121
A Trip Report (note: I do not recommend the approach from the Black Butte Trailhead)

A Video from the same source